The highly anticipated season two of The Wilds premieres on Prime Video on Friday, May 6th. Season one of the series followed a group of teenage girls stranded on a deserted island after a plane crash. At the end of last season, after being rescued, Leah (Sarah Pidgeon) discovered clues that proved her theory that the plane crash wasn’t an accident, which no one back on the island had believed.

During season two, while still on the island, Leah is still going through a lot with no one wanting to listen. This leads to some heavy scenes. During a recent roundtable interview, we asked the actress about connecting with that part of the character. “When you experience an emotion,” explained Pidgeon to SciFi Vision, “whether or not you're acting, your body doesn't know that you're acting. So, there were certainly some long days and some hard days, but the storytelling and the writing is so strong in the series that I feel like [it] does so much of the work for you. It really is just trusting in [that] and hoping that you're ready to be in that place and ready to be on the other side of it when you come out of it. I think it's just sort of really taking in everything this character has experienced. Everything [they’re] experiencing, it's so overwhelming, when you really just sit and think about it. I think it's not that hard to feel empathy for these characters and embody that emotion.” 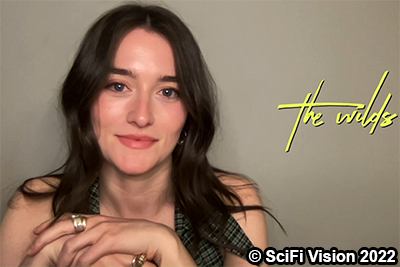 Reign Edwards, who plays the character of Rachel, also goes through a lot of emotional scenes, as Rachel believes her sister, Nora (Helena However), to be dead. The actress agreed with Pidgeon that your body doesn’t know the difference. “I think what is also really incredible is that we have cast and crew that really respects everybody's process, whenever we know that someone has a big emotional day coming up,” added Edwards. “Everybody kind of goes along with whatever that person needs. So, it really helps us to go through our processes to ease in and out of these emotional places, because whether we're building it up for ourselves for the character from reading what the character has, or just something that we've personally experienced, it's still a real emotion that we are conveying, and it's definitely a lot of a lot of work.”

Although the island has been hard on the girls, there are positives that have come from it to. According to Pidgeon, Leah has grown up a lot on the island. “I think Leah understands the power of her own mind,” the actress told SciFi Vision. “In her backstory in season one, she's dealing with a lot of things for the first time, and like all the girls, she sort of gets a crash course in life and [is] really unpacking these feelings that she's just experienced. I think she comes out on the other side with a lot more power, knowing herself a lot better and she can use that to her advantage.”

Rachel has grown as well, according to Edwards. “I would say that Rachel kind of learns to let life happen,” the actress told the site. “I think she was so caught up in being strategic and trying to plan everything out, because that's what she did in diving. All of that was kind of taken away from her, and then she's on this island, and even more things are being presented to her that she never would have thought she would have ever encountered. I think in a very abrupt and dramatic way she's learned to let life happen.” 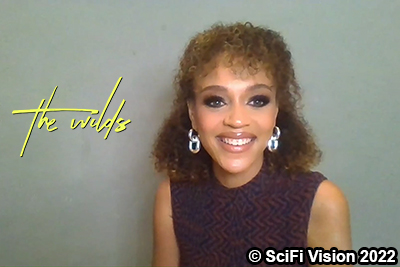 Leah and Rachel actually bond a bit in the second season. According to Edwards, they both react in intense ways to different things, and it ultimately connects them.

It isn’t always dark, however, and both actresses said during the interview that they were surprised by some of the comedic moments they got this season.

In addition to last season revealing that the girls were part of an experiment called the “Dawn of Eve,” it was also revealed that there was a control group of boys, called the “Twilight of Adam” who were purposefully stranded on an island as well. Season two introduces this group to viewers. Edwards, however, was quick to say that the show still has a female focus. “I think the male characters coming on helps to kind of understand a little bit more of what season one is and what the female experience is,” said the actress, “while also kind of understanding why males are society-wise the way that they [are] through the experiences that they have and why then it impacts women. So, I think that there's still a very strong female presence on the show, and having the guys, interestingly enough, helps tell that story a bit more as well.”

Pidgeon hopes that fans get wrapped up in the season. “I hope fans walk away with the feeling of being super satisfied and entertained and enthralled and heartbroken and just is so invested in it and maybe wanting more or wanting to watch it again.”

Be sure to watch our interview below and catch season two of The Wilds, available to stream starting May 6th on Prime Video.