This upcoming Monday starts the semi-finals of NBC’s American Song Contest. Riker Lynch, who represents Colorado, performed on week three with his song “Feel the Love,” which was later chosen by viewers to move on to the next round. Lynch describes his music as “trop pop,” or “tropical pop.” When speaking with Jamie Ruby of SciFi Vision in an exclusive interview, Lynch talked about what that really means to him. “[It] still has that dance-y sort of synth-y electronic element,” explained the singer, “but at the same time, it always has an undertone of tropical beach.” 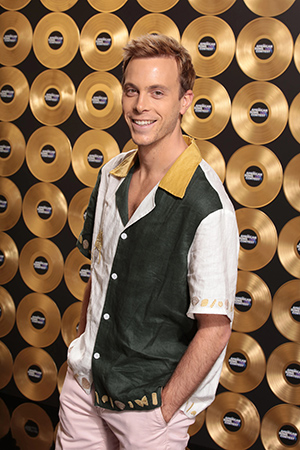 According to the performer, the song was written specifically for the competition with some other great song writers, including Andreas Carlson, Jimmy Jansson, and Desmond Child. “They’re big, heavy hitters. They're pros when it comes to songwriting. So, I feel very, very fortunate, I got to work with them,” said Lynch.

Lynch continued that he wanted a song that instantly would take you “away from the rest of the world for a little bit.”

The singer also talked about coming up with the look of his performance. “I basically had a thirty-minute conversation with the creative team [of the series]. I told them what I'm all about and what I wanted to represent as a person and as an artist and what I wanted to bring to my performance, which was high energy, good vibes, spreading the love as much as possible…They basically sent me a piece of paper of what the stage was going to look like, and I was like, ‘That's exactly what I want.’ It was perfect. Then, when I got to the stage, it was even better.”

Lynch told SciFi Vision that he feels comfortable performing on live television as he’s gotten experience before by performing on talk shows and late night entertainment shows as well as being a contestant on Dancing with the Stars.

Besides singing and dancing, Lynch is also an actor, director, and writer, and is currently working on writing and directing his first feature film.

For much more, including as message from Lynch to his fans, watch the full interview below, and stay tuned for more from Lynch in our interviews with the semi-finalists.