Tonight, Fear the Walking Dead returns with all-new episodes to AMC and AMC+ for the back half of season seven. During a recent roundtable to promote the series, SciFi Vision talked to cast members about their characters’ interactions with Strand (Colman Domingo) and where their breaking point with him lies.

We asked Alycia Debnam-Carey if it’s possible for Alicia and Strand to coexist and if she could ever trust him again. The actress talked about their unique dynamic. “The two of them have really both known each other the longest in this journey,” said the actress. “I think one of the unique characteristics is that Alicia has seen Strand for who he is at the very beginning before everything started and knew he was a con man to begin with, knew that he had that kind of manipulation aspect to him, that he's someone who will do anything to win and survive. That's one of the reasons why he's been able to go so long.” 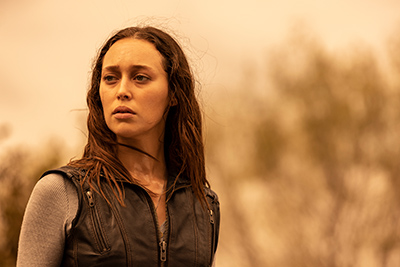 The actress continued that she thinks the two have finally reached a crossroads. “She now is seeing him for really who he is,” explained Debnam-Carey, “despite the camaraderie and the family they built with each other. She's always known that manipulation, that con artistry is in him, and she's now seeing it in full force and the danger it brings everyone and the selfishness that is so inherently within him, and I think it is has come to a crossroads that she can't really accept that anymore. She can't go along [for] that ride. It's not just a diversion of ideas, it's a diversion of complete ethics and morals…So, I don't know that she's in a place to forgive and let go. There's been so much damage that's happened.”

Alex Nisenson, who plays Charlie, also talked to SciFi Vision about how much her character is willing to take from Strand. “I would say one of my favorite things about Charlie is that even though she's young, she's very [aware] of what's going on and very aware of the reality of all the different situations and everyone's true intentions and personalities,” said the actress. “…I think her relationship with Strand's definitely evolved from their first time meeting until now. We've seen them have their moments, but I think she is very aware of what he's doing and who he is. I think she's strong, and I don't think she's willing to put up with a lot right now, or much at all.” 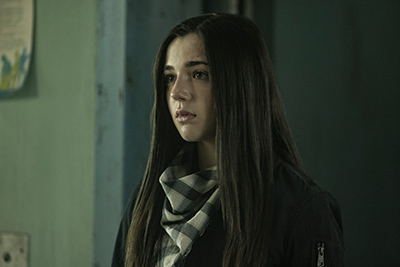 Omid Abtahi, who plays Howard, also talked to the site about how far his character can be pushed. “It's a question I asked myself every time I got a new script, and it becomes very clear in the second half of the season, what Howard's motivation is,” the actor teased.

Abtahi continued that it’s important to Howard to see the tower and the community thrive. “I think anything that endangers that vision, you'll see pushback from Howard, but at the same time, he sees Strand as the vehicle to realize this vision that they both have together. So, they don't always see eye to eye, but Howard has his own reasons as to why he's an enabler.”

Of course a topic brought up during the roundtable was the upcoming return of Madison, Alicia’s mother, played by Kim Dickens. According to the actress, Alicia definitely thinks her mother is dead, so there isn’t a reunion on her mind; she’s had to move on.  “There are elements of Madison that are part of her ethos that she travels with, trying to find the good in things, and there are elements that now we've seen her grow into that are a lot more like her mother, but I think for her to have found her own person, she sort of had to let the idea of [a reunion with] her go a little bit and to embrace her new self in this world.” 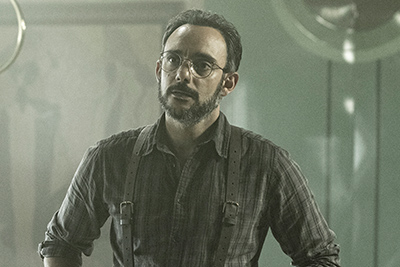 During the interview, Debnam-Carey also talked about some of the difficulties in logistics of filming her scenes in the tunnel where Alicia cut off her arm earlier in the season. “We had a bunch of obstacles in terms of the mechanics of the tunnel, which meant we actually had to shoot it about three times,” said the actress. “…That sequence in particular, was just very challenging. We were in a small space; it was really confined…You're doing a lot, and just emotionally it was really, really hard.”

The actress also talked to the evolution of the character throughout the series and how she’s “finally getting to a place where she's comfortable on her own,” calling her an “apocalyptic warrior of sorts.”

Be sure to watch all-new episodes of Fear the Walking Dead tonight and every Sunday on AMC and AMC+.
Twitter
BotonSocial por: SocialEmpresa
Category: Interviews