Recently Amazon released the new series Outer Range, created by Brian Watkins. The series follows Royal Abbott (Josh Brolin), who finds a mystery on his ranch that will change his and the life of his family forever. Imogen Poots plays the role of Autumn, a mysterious woman who makes camp on the ranch and becomes vary interested in Royal’s discovery.

According to Imogen Poots, who recently spoke with SciFi Vision in an exclusive interview, her reason for visiting the ranch is unclear at the beginning. “[T]he motive soon becomes apparent, but I probably can't say too much,” teased the actress. 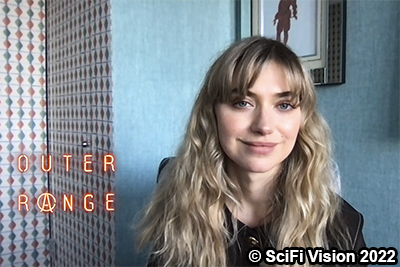 During the interview the actress talked about her character’s philosophical views and how she drew a lot of inspiration from books. “In the script,” said Poots, “it talks about her fascination with Heraclitus, the philosopher and a writer called Simone Vile, quite extreme ideas that she was adopting and became a disciple of. So, it was interesting to get into the mode of thinking of someone who really is living their life by someone else's ideas, and the dangers of that, but also, perhaps the benefits of that.”

The actress added that being in New Mexico where the series shot was also a help to her preparation. “She's a real obsessive of the land and the outdoors and being there could only benefit that performance.”

For more from Imogen Poots, watch the full interview below, and be sure to catch Outer Range, now available to stream on Prime Video.