Today the third season of the UK crime drama The Bay comes to American audiences via BriBox. The series follows DS Jenn Townsend, played by Marsha Thomason, the new FLO (family liaison officer) at the MIU. She must help a grieving family while also trying to solve a murder.

Thomason was a fan of the series before taking on the role, and she really liked that you get to see more than just Townsend as a detective. “What I really liked about getting the opportunity to play Jenn,” said Thomason during a recent exclusive interview with Jamie Ruby of SciFi Vision, “is that she's at work, and she's a badass, even though she's not necessarily feeling her badassery when we find her, but she’s a badass. Then, we see her at home with all of the turbulence that’s going on there. So, we get to see a fully rounded person, which is what attracted [me to it].”

The role of a FLO is not something that most people know about, and Thomason wasn’t familiar with it either, which she feels is one of the reasons the series is so popular. “I don't know of any other show that comes up at it from the angle of the family liaison officer,” said the actress. “…We all love police dramas, but what we're dealing with is a cop who’s very specifically tasked with working with the family who are going through this horror…that's really interesting.” 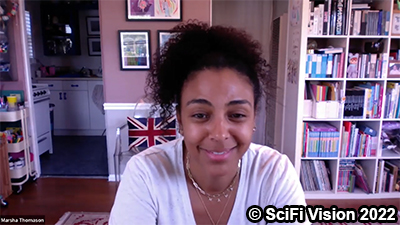 Because of COVID, Thomason unfortunately didn’t get to hang out with a FLO to prepare, but found everything she needed from watching the previous two seasons, the script, and reading up on it on the internet.

Townsend is someone who gets emotionally invested in the families. Thomason said that while it helps her character deal with the family, she’s not good at leaving it behind. The actress admitted that while she connected with Townsend's empathy, she wouldn’t be able to do what she does. 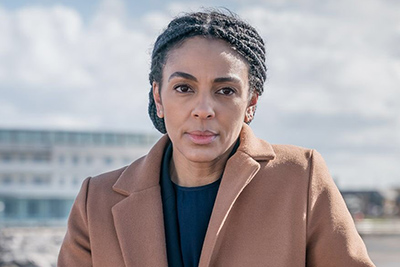 While talking with Thomason, we of course had to also ask her about her work on the series LOST, on which she played the character of Naomi. In addition to saying it was an “honor” to be a part of the series, she also admitted that she was a fan since the first episode, well before she joined the cast in season three, and recalled freaking out a bit when she first had a scene with Naveen Andrews, who played Sayid. “Somehow, I managed to keep it together and got to the end of the take,” said Thomason, “but it was surreal. It was the biggest show at the time, and I'd been watching it for two years, [but] everybody was so welcoming…That's one of the lovely things about it, even though it was such a big show, and I was nervous to join, once I got there, the nerves just left because everybody was so very welcoming.”

To hear more from Thomason, including what kind of detective she would make, what part of the character she had difficulty connecting to, when they start filming The Bay again, and much more, watch the full video interview below and be sure to watch The Bay, now available to stream on Britbox.
Twitter
BotonSocial por: SocialEmpresa
Category: Interviews