Apple TV’s latest offering is a riddle wrapped in a mystery, inside a tragedy. The Last Days of Ptolemy Grey stars Samuel L. Jackson as an elderly man suffering from dementia. Widowed, childless and living alone in a filthy apartment, Ptolemy struggles to separate reality from memory. When his caretaker is killed, teenage Robyn (Dominique Fishback, Judas and the Black Messiah) assumes responsibility for the old man. Both their lives change when they learn of an experimental treatment that can temporarily revive Ptolemy’s cognitive function. With his mind restored but time running out, he seizes the opportunity to solve a murder and unravel riddles from his past.

The show is based on bestselling author Walter Mosely’s novel of the same name; Mosely and Jackson worked together to adapt the story. The six-episode limited series premieres today on Apple TV+ with the first two episodes, followed by one new episode every Friday. 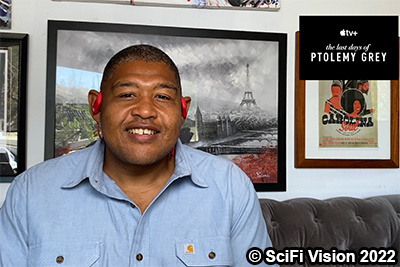 The early episodes are heartbreaking. Ptolemy is mostly forgotten by his extended family; they mean well but have their own families and problems to deal with. Omar Benson Miller (Ballers, CSI: Miami) plays Ptolemy’s devoted nephew, Reggie, who does his best to look after his elder. The role, Miller told SciFi Vision, hit close to home.

“That's one of the things that I drew from in my real life,” said Miller, “because my parents are aging and thus everybody in their age group is aging, all of my aunts and uncles…Nothing in life really prepares you for that, for what you deal with watching the people that you grew up [with] as your heroes and idolizing be in need. So, the approach that I took was one of love and humanity and kindness from Reggie to Ptolemy.”

Marsha Stephanie Blake plays Niecy, the niece who steps in after Reggie is suddenly unavailable. The de facto family matriarch, Niecy has been looking after a number of family and friends and is unable to take a hands-on role with Ptolemy. She sends Reggie and later Robyn to look after Ptolemy. 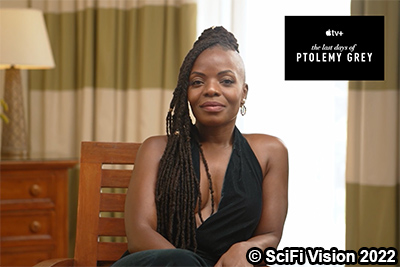 “I think Niecy is not prepared to see her uncle deteriorate and I think that's where things fall apart for her” said Blake, echoing Miller’s comments. “I think it's a really hard thing to watch someone who you admire, you love…It's hard to watch that person deteriorate, and I think Niecy struggles with that. And that's why her approach is different from Reggie's.”

Viewers might judge Niecy for not being more involved, but Blake sees it as an act of love. “She cares enough to send a responsible, beautiful human like Reggie to go take care of Ptolemy, but I think she herself cannot face him in his current state. It's hard.”

Watch the complete interview with Blake and Miller below.