Recently, Sonita Henry caught up with Jamie Ruby of SciFi Vision for an exclusive interview to talk about the role.

One of the things Henry loved from the beginning is that the personal lives of the characters are an integral part of The Chelsea Detective. She thinks she is very similar to Priya, and also
could really relate to the point Priya was at in her life. “At the time I auditioned for the show,” said Henry, “she's now five, but I had a four-year-old daughter. So, I completely related to Priya’s fear of being a new mother, and that doesn't always get talked about it. I feel like it's the societal norm that women are expected to just fall into the role of motherhood, and it should all come naturally, that we're all these born carers and caretakers, and it doesn't happen that way. You have to learn it. You have to work at it, and I love that Priya is working at it.” 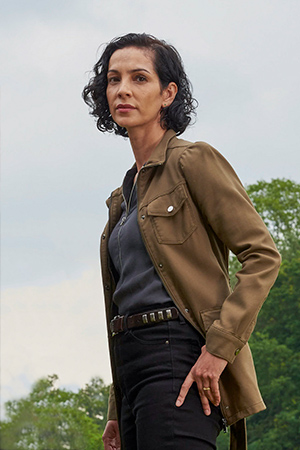 Henry also liked that Shamsie is a woman being the tough cop. “You always have to have the good cop and the bad cop. She was never written as the bad cop. I just, I don't know, I came on set and started throwing my weight around a bit, but in a good way, I think. And I think it's a good character trait for Priya to have.”

A big part of the series is the partnership between Priya and Max, who she described as having a “yin and yang” relationship. “I feel like they're one whole person when they're together,” said the actress, “because they're very fractured, and they are very broken people, but when they're together, I think the fact that they complement each other makes them one giant brain that can get this done.”

The two performers get along really well, and Henry had nothing but praise for her costar. “[He's] not just a giving person but a giving actor,” she said, adding that he brings a warm atmosphere to the set.

For more from Henry about her work on the series, be sure to read the full transcript below, and check out The Chelsea Detective, now streaming on Acorn TV.

SCIFI VISION:  Can you talk about what first attracted you to the part?

SONITA HENRY:   Yeah. I mean, I love detective shows, everyone loves a detective show, at least they can all name one. What I loved about this was that it followed their private lives a lot more, that was an integral part of the show. But also, at the time I auditioned for the show, she's now five, but I had a four-year-old daughter. So, I completely related to Priya’s fear of being a new mother, and that doesn't always get talked about it. I feel like it's the societal norm that women are expected to just fall into the role of motherhood, and it should all come naturally, that we're all these born carers and caretakers, and it doesn't happen that way. You have to learn it. You have to work at it, and I love that Priya is working at it.

You just said everybody knows a detective show. So, my question is, do you think you would make a good detective? Do you enjoy solving puzzles and things like that?

At the TCA panel, Adrian had said that your characters couldn't do without each other, or at least that his character I guess, couldn’t do without you. Can you kind of talk a bit about more about that, and how they kind of complete each other, I guess?

Yeah, I think they do. I think it's that yin and yang thing. They’re one whole. I feel like they're one whole person when they're together, because they're very fractured, and they are very broken people, but when they're together, I think the fact that they complement each other makes them one giant brain that can get this done. He's more emotional, a little softer, and Priya comes in a little hard sometimes, but is willing to use a little bit of force, a little bit of anger, to get the answers that she needs. 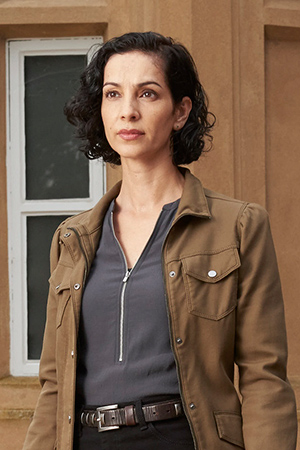 I think that's a little surprising, too, because, like, like you said about being a mother, usually the woman is the less hard one, I guess.

That's a given. I think that's what makes it even more interesting is that she's a woman being the tough cop. You always have to have the good cop and the bad cop. She was never written as the bad cop. I just, I don't know, I came on set and started throwing my weight around a bit, but in a good way, I think. And I think it's a good character trait for Priya to have.

So, you said you've obviously connected with her being a mother, but what part of the character did you have difficulty connecting to and pulling out of yourself?

The running. I'm not a runner. I'm just I'm not a runner. Also, any woman that's just had a baby and is still sprinting? I have to question that. And I did question that with the producers and the writers, because her baby is three months old, and she's back on the track running. I mean, I'd like to speak to an OBGYN and ask their opinion on that, but yeah, that was the toughest part, the physical aspect of it. It was the running.

At least she cancelled her race in the end and didn’t do it.

I think they probably - I complained in a nice way so much about the running that they started just writing those scenes out, like, “It's okay, you don't need to do it. You can just put your sneakers on in this scene and we will know that you were running.”

Yeah, it still seemed like you ran a lot. But was there a part though of maybe her personality, not just the physical, but something that you had trouble connecting to?

Can you talk about working with Adrian?

He’s terrible. He’s a horrible man. [laughs] He is the most delightful person to work with, and this was the first time he was - which was shocking to me, but it's the first time he was a lead in a show, and it was the first time that I was a lead in the show. So, it was just the perfect timing of these two people to come in together who have gone off and been what we call SAS actors. We kind of fly in, and we do our little bit and leave usually in shows. This is the first time that we came together, and we were able to just create these characters and create these stories, and we were able to support each other. He's such a giving - not just a giving person but a giving actor. And as number one on the call sheet, the tone of the show, the tone of the set, the tone of how people treat each other is always led by the first, and the second to a point. So, it was just the happiest, nicest, most loving, warm set to be on. I know that's not going to make great copy for you. I could say it was terrible, and we were fighting constantly, but no, it was a blessing. This whole show has just been a blessing.

I know I was going to say, at the TCA panel, you seemed like you get along. That's always good. 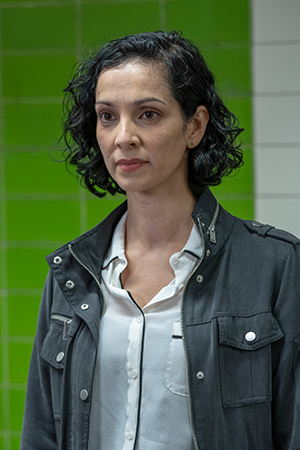 So, I know obviously you said at the beginning the chemistry we read was on Zoom, but was there anything else that was kind of filming wise that was different because of COVID? Or difficulties that they faced while filming?

Yeah, I mean, we had to get tested constantly. We had to wear masks constantly. I'm quite a huggy touchy feely person, and we weren't supposed to touch anyone or hug anyone. So, that was mostly the hardest thing about trying to film and COVID.

Do you have a favorite scene that you can tease without spoiling too much?

I loved anything that we shot in London, because getting to shoot in Chelsea, you don't get to do that very often. Born and raised in this country, but I've never filmed in London. So, those were fun, but my absolute favorite scene is a very simple scene, and it's when Adrian, Max, is talking about his father to Priya, and he's not really talking about his father. He's trying to offer her advice without offering her advice, and the way Adrian delivered that scene, and when we were filming, my reaction was completely natural. That was not a put-on actor moment; that was just me responding to another human.

So, if you do get a series two, is there someone that you'd like to get more scenes with? Because obviously, most of your scenes are with Adrian.

Most of my scenes with Adrian, which I'm very happy about. I love the scenes that I get to do with Sophie [Stone], who plays Ashley, our forensic expert. She is a delight to work with, and I've been a fan of hers for years. So, when I heard that she was casting this, I was over the moon, but I also think we need more scenes with Priya and Jess (Lucy Phelps). The detective world is quite a male dominated world, and so to have two women, I think that would be cool.

Definitely. Is there something specific you'd like to see happen with your character? No more running. [laughs]

No more running. She gets like an ankle injury or something; she can’t run. I’d like to kind of find out more about her family life. We mention my husband Nitin (Davood Ghadami)’s mother in a scene. So, there's something there; that's all they allude to is that I don't want to do something, because his mother told me to do it. So, I think that would be - because culturally, that would be interesting, but also just the mother-in-law. That's always an interesting thing.

I’m just kind of I'm curious. Do you know if they have it set [to have] a second series? I mean, obviously it hasn't aired yet, but I assume that there's material there.

Yeah, as far as I know; I think the streaming services do things a little differently to networks. So, they never say, “Yes, we want a second season,” until the last minute, and then everyone scrambles around trying to make a second season. But I know that scripts are being written, but they haven't signed off on whether we're going to get a second season, but I hope so, because there're so many stories that we could tell, and the personal lives of Max and Priya, there're so many stories we can go to, that I really hope we get to do it again.

Okay, and this one sometimes hard, but can you describe Priya in three words?

Ambitious, tough [laughs] Oh, why do you do this to me? I've tried to give a really cool answer. You know what? Ambitious, tough, and cool.
Twitter
BotonSocial por: SocialEmpresa
Category: Interviews