Tonight, Super Pumped: The Battle for Uber premieres on Showtime. This season, the anthology series explores how the creation of Uber, driven by CEO Travis Kalanick, changed the world.

In the series, many of the cast play characters based on real people. According to Joseph Gordon-Levitt, who stars as Kalanick, playing a real person can in ways make the role easier. “[Y]ou just have so much to go on,” Gordon-Levitt told Jamie Ruby of SciFi Vision during the recent TCA panel. “…You can go to this well of the real person and see if you can find some inspiration there.”

Uma Thurman, who plays Arianna Huffington, told the site that you have to have a bit of humility to play a real person. “[Y]ou are going to be wrong,” said Thurman, “and there might be some things that are right, and it's a creative process…I kind of felt like it was impossible to get it right, but I would play the writing and listen to the sound and hope for the best.” 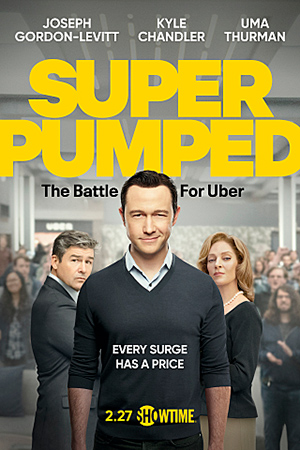 Gordon-Levitt agreed. “It's important to acknowledge that you can never really perfectly render a real person…ultimately, these are characters that we are playing, and they are inspired by real people.”

Kyle Chandler, who plays Bill Gurley told SciFi Vision that there is more responsibility playing a real person and a different type of creativity involved. “Playing someone who is still alive when you can't get into the true facts of what's going on, you still have to be creative and use your imagination,” said the actor.

In the series, Kalanick, among others, definitely has a questionable moral compass, but for Gordon-Levitt, it was important to show the complexities of the character. “My job is not just to relay what happened,” said the actor. “My job is to relay how it felt and who is the whole human being making these things happen, and I'm of the opinion that all human beings are complicated…Reading the book, reading a lot of the press around Uber, a lot of the focus is on these sorts of incredible things that Travis did, both good and bad.”

Gordon-Levitt wanted to show all sides of Kalanick. “I was really intent on not reducing Travis to his headlines,” said the actor. “I really wanted to show a whole and multifaceted human being.”

It was important to Gordon-Levitt to not judge a character he’s playing and to empathize with them.

Executive Producer Beth Schacter added that Kalanick isn’t a “con man.” It’s not what he did, but rather the “method of the process.”

“I think that's definitely a question that we are interested in is what makes these people want to order their universe in the way that they do,” said executive producer Brian Koppelman.
Twitter
BotonSocial por: SocialEmpresa
Category: Interviews