Interview: Shining Vale's Mira Sorvino on Playing a Ghost from the 50s

Next Sunday, STARZ premieres it’s all-new horror comedy Shining Vale, which centers around a family that moves from the city to a house in a small town where terrible things have happened, but they are only seen by author Pat (Courtney Cox). Actress Mira Sorvino plays the role of Rosemary, a ghost in the house who died in the 50s.

The actress looked to film and television from that decade as inspiration. “I watched The Donna Reed Show [and also Ozzie and Harriet], and I was really sort of horrified by just the role of what motherhood and wifehood and womanhood was supposed to be like,” Sorvino told Jamie Ruby of SciFi Vision during a recent roundtable interview. “It really rang so false to me. It didn't have any real humanity. It was all about being for show, having the best social schedule, going to five dinner parties a week and making the perfect casserole and just everything, you know, being in the gossip train. I said, ‘Oh my gosh, this doesn't relate; I don't relate to this way of life at all.’ But that is sort of what Rosemary was trying to fit into.

“Then…I think I rewatched The Postman Always Rings Twice, and just the grand beauty of the sultry screen heroines, and [I] watched a few more noir movies with these fabulous women in them, and I was like, ‘Okay, so she wants to be a little bit more fabulous, a little bit more dangerous.’ Even though she wants to be a success at the social calendar, she wants to throw the best parties. She wants to dance in the cotillion, but underneath it all, she's longing for something more, something real, something fulfilling and true and honoring and that she matters. 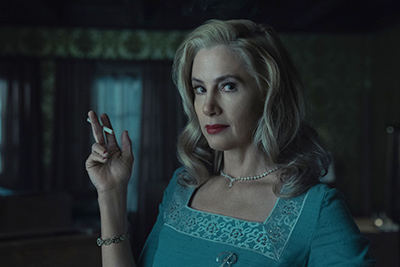 “But she's also from the other side of the ectoplasm. So, it's always going to be in her nature, ultimately, to wreak havoc, as much as we sort of like her and we feel for her, and I loved playing her. Eventually, like the scorpion taking the frog across the river, she’s just gonna sting.”

The series often leaves it unclear and up to the viewer to determine if Rosemary is really there as a ghost or simply in Pat’s head. To Sorvino, it didn’t matter. “I had to play her as though she's real, no matter what she actually is,” said the actress, “because, otherwise, it doesn't have any internal logic for me to play.”

The actress saw her as two different characters. “There was a 50s housewife that lived in that house that looked like Rosemary but didn't dress as glamorously, wasn't as fabulous, wasn't self actualized and proud and feisty this way. She was much more repressed and held down and kind of abused by her husband, certainly mistreated, betrayed, and really, really miserable, like having a nervous breakdown, miserable.

“…When she's the ghost version, or the spirit version, or whatever you want to call that manifestation, she is all the things that Rosemary would have wished to be in life. She's bold; she's fabulous. She's living like a 50s movie screen queen…She's got the zeal and the gusto of someone who is starved for life.”

Sorvino added that it’s that hunger for life that helps her connect with Pat. “I think that she gives Pat that same hunger that she already deep down is already feeling,” said the actress. “I mean, Courtney’s character is already dissatisfied, kind of lost, kind of looking for her way back to herself, and Rosemary absolutely gloms onto this in this sisterhood kind of way and tries to encourage Pat to break her molds, sometimes with disastrous consequences, but always fun.” 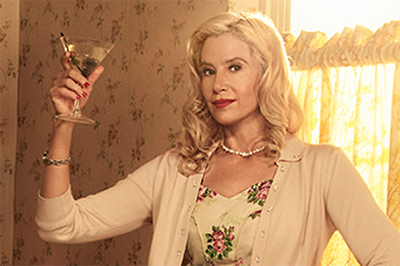 The actress continued that Pat starts to realize that following the rules as she does might not be enough for her, and she’s not living her life truthfully. “[A]s Rosemary has more influence on her, she realizes that…she herself is constrained by these societal regulations and her own regulations, and the weird, weird inherited relationship with her mom. You see this generational saga of slight insanity from mother to daughter to granddaughter…She has this wild child in her. She used to be a heavy drinker, and it's as though she cleaned herself up, but then, silenced a side of herself, and that's the part of her that is called to by Rosemary.”

During the interview, Sorvino also touched on the fact that all the directors are female and the whole crew is diverse. She also, however, was quick to praise showrunner Jeff Astrof. “Jeff was really there 24/7,” said Sorvino, “and he ran the writers room. He is a best friend to women in terms of writing for women and understanding women and having a heart and a humor for them…He is a huge part of why the show is as amazing as it is and why the female characters are as fully drawn and multifaceted as they are.”

For more, be sure to watch Shining Vale on next Sunday on STARZ, and stay tuned for more of our interviews for the series.
Twitter
BotonSocial por: SocialEmpresa
Category: Interviews