Reacher, which is based on the Jack Reacher novels by Lee Childs, recently premiered on Prime Video. The first season is based on Childs’ debut novel, Killing Floor. In the town of Margrave, Georgia, Jack Reacher (Alan Ritchson) is arrested for murder, but it soon becomes clear to Detective Oscar Finlay (Malcolm Goodwin) that they need his help in solving the case. Joining the investigation is Officer Roscoe Conklin, played by Willa Fitzgerald.

Fitzgerald, who recently talked to Jamie Ruby of SciFi Vision in an exclusive interview, loved Roscoe from the beginning and was eager to see her journey unfold. “She is a spitfire,” said the actress. “She has such a clear opinion on situations and such a clear sense of self, and to get to play a character like that is just really fun, because they move through the world in such a different way. I was just compelled by her charisma and her kind of just kick-ass character, and I was excited to see where where that character went over the course of the season.” 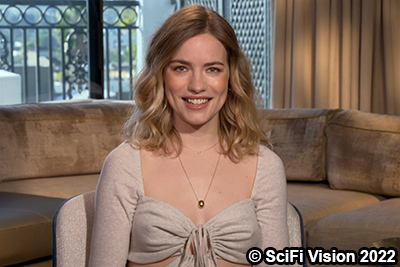 The actress praised showrunner Nick Santora for making it easy to see who the character was. “I think Nick did a really amazing job of writing a character that kind of just jumps off the page. I knew who she was when I read the first scene that she's in…and I think that that's a sign of great writing. I think that's a sign of great character development and just really knowing who you're writing. It's very clear when you talk to Nick that he had a really clear idea of who that character was, and that makes it very easy for you as an actor to be a great conduit for that vision.”

The actress did have some challenges, however, and spoke about the difficulties understanding some of Roscoe’s choices. “Probably the part of Roscoe that was the most difficult to access and understand was, I think, was her choice to stay in Margrave,” said Fitzgerald, “which we kind of touch on a little bit in the series when we learn about the other opportunities that she had to maybe leave and go after some sort of bigger career. I think that as someone who left home left my hometown, that's something that, to me, was an interesting and exciting challenge to kind of look at and make those choices and really, empathetically understand what that was for Rosco that made her want to do that.” 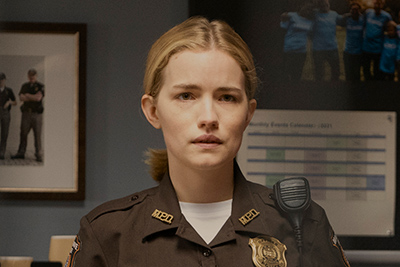 She continued that Roscoe’s choice to stay becomes a complicated one, but it was important to the character to “impact her hometown in a positive way” by joining the local police force.

Fitzgerald was also quick to praise her costar, Ritchson, and said that they had a lot of fun together. “He's just a real funny dude,” said the actress. “We had so many just laugh attacks on set.”

The actress added that he was always positive, which really helped the atmosphere on set with the long days. “He's a great person to have by your side on set, because he is always positive, and that’s saying so much, especially when you're working under long hours and hard conditions.”

For the rest of the interview, be sure to watch the video interview below, and check out Reacher, which was already renewed for a second season, on Prime Video.