Tonight, The Walking Dead returned to AMC for all-new episodes of the final season. At the end of the episode, Lance Hornsby (Josh Hamilton), accompanied by Eugene (Josh McDermitt) and some soldiers, invited the residents of Alexandria to join the Commonwealth community. During a recent roundtable interview, members of the cast talked to Jamie Ruby of SciFi Vision about how difficult it is for their characters to stop moving and settle down and how they are dealing with that. Eleanor Matsurra, who plays Yumiko on the series, doesn’t know if they can. “I don't think it’s in anyone's nature to sit still, kick back, and relax and be like, ‘We did it; we found it; we found the place,’ said Matsuura. “They know what's out there. They're mistrustful of it from the start, even someone like Yumiko, who's really living a very privileged side of the experience of the Commonwealth and is certainly reaping the benefits of a system that is always going to serve her well, because she's upper class in this world.”

The actress added that it's partially because Yumiko has seen too much. “She's knows too much to survive this long for her to just accept this so easily and to not be savvy to the things going on around her…It's just not realistic. I think they all know that too well, which is why they can never just sort of sit down and enjoy it.”

Lauren Ridloff, who plays Connie, seconded that. “You can't just erase our history,” the actress told SciFi Vision. “I mean, I think that is just impossible to do…[Being at the Commonwealth is] almost like an amalgamation of what's happening throughout going through the apocalypse, and now with that knowledge and with that experience that [we] have going back to our old selves, do we continue to make those same decisions based on the post-apocalyptic situation? And how does that influence our behavior and our decisions within a quote unquote, normal society?...I think that's an interesting thing to explore throughout the season.” 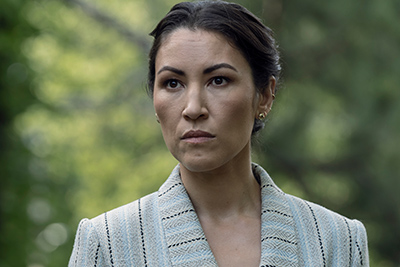 Ridloff added that settling down as well as happiness in general is not necessarily Connie’s focus right now. “She survived the apocalypse for so many years…I think that actually has become a big part of who Connie is now,” said Ridloff. “I think that the pursuit of happiness has really just dissipated. It's no longer a viable option.”

Ridloff continued that Connie is still holding back her values of truth and justice at the cost of that happiness.

The actress added however, that she doesn’t think Connie regrets going to the Commonwealth. “I feel that is the natural next step for Connie. It's all about moving forward and making discoveries,” she said.

Paola Lázaro, who plays Princess, agreed that it’s hard for the characters to stay still and told SciFi Vision that it’s “in their nature to keep fighting.”

Lázaro did also say to the press, however, that Princess is trying to fit in. “[S]he's trying to style her hair different and dress a little bit different. I think she's trying to assimilate, because she feels like she's part of a society for the first time, probably in her life. So, you can see that difference in her. But I think there's always going to be a part of her that's like, ‘No, my nature is wild.’ Yes, she can be calm and everything, but she's lived too much in the struggle, too long in the struggle, to really fully be comfortable in this new world.”

Yumiko didn’t have worry about fitting in, because she’s already a part of that upper society. Matsurra also added that she found her brother there, so she also has no regrets going to the Commonwealth. 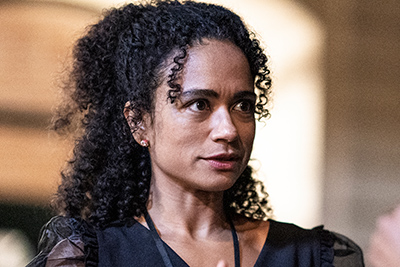 Moving to the Commonwealth didn’t just affect the characters, but the performers as well, as they are no longer covered in dirt and always wearing the same clothes while filming. Matsurra, who at the beginning of her role on the series missed dressing nicely, admits that she now misses the dirt. “The Commonwealth happened, and Yumiko really gets this transformation. Now, I miss the woods. I kind of miss the dirt and the grime…I'm going to miss just getting down and dirty on The Walking Dead. There's something really lovely, particularly as an actress; there's a lack of vanity that we have on the show. You get to come in and get some dirt thrown on you some blood splattered on your face, and you're good to go…I think I'm really gonna miss that.”

Ridloff, who quipped that she wouldn’t miss getting dirt and blood out of her nail beds, said that she would miss, however, how it affected character development for her. “[W]hen I'm in the woods, it influences my choices as an actor, as opposed to being on set in a studio setting in the Commonwealth where everything is so bright and colorful and sweet. It really can be challenging for me as an actor to make decisions that really come across that are true to my character…I do love that challenge as an actor.”

Lázaro added that she would simply miss the people. “Actually, I think the thing that I'll miss the most is the family, The Walking Dead family, including the fans and my cast mates.”

Another topic that came up during the roundtable was Connie’s relationship with Daryl (Norman Reedus) on the series. Ridloff said that she thought the shippers would find the season “very interesting,” and that the Connie/Daryl shippers and the Carol (Melissa McBride)/Daryl shippers would continue to argue, which she loves seeing. She joked that perhaps the three of them could just become a thrupple. 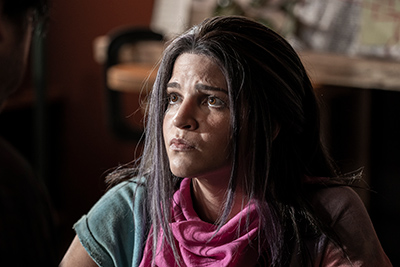 Both Matsuura and Lazaro agreed that Connie and Daryl make a good couple and were rooting for them. Lázaro added that their relationship is “pure and beautiful and innocent.”

Of course, the topic of Marvel’s Eternals also came up during the roundtable, in which Ridloff plays superhero Makkari. The actress said that it was a “huge honor” to play both Makkari and Connie.

Matsurra added that seeing the actress as a superhero was a “natural progression” for Ridloff. “She should have a spin-off. She was the best one in it!” said Matsurra.

Be sure to watch the final season of The Walking Dead, Sundays on AMC and AMC+, and stay tuned for our other interview with the cast.
Twitter
BotonSocial por: SocialEmpresa
Category: Interviews