Video Interview: Reacher Star Alan Ritchson Hopes Fans Forget About the Physical Side of the Character

Yesterday, Prime Video dropped the new Reacher television series a day early. The show is based on the Jack Reacher novels by Lee Child and stars Alan Ritchson in the title role. In the book, the character is large and imposing, and the actor had to train for the role. “I've, I've tried to stay fit most of my career,” said Ritchson to Jamie Ruby of SciFi Vision during a recent interview, “but I walk around like 205 usually, and [they wanted me] to be 235 for this. So, during the pandemic when you can't get to a gym, because everything’s shut down, it made it interesting. So, I was fortunate enough to be able to build a little mini gym in [our] living room and our dining room…I worked out five days a week, once we got a little closer to production.”

The actor also told the site they did a lot of fight training. “We worked with knives. I was able to recall some of my work on Hunger Games: Catching Fire, where I worked with a dagger extensively and got really good at it. So, it was fun to be able to sort of recall that, but fighting with a bicycle tire and a necktie was new to me. So, it took a little work, but the stunt team was patient with me while we built those fights, and I think they came out great.”

The physical scenes are the ones the actor finds the most difficult. “I mean, it's dangerous and exhausting and brutal,” Ritchson told SciFi Vision. “It's as hard on the body as it looks, and I couldn't wait to get done with those, because it was months of training. Those those were the kind of things once it was over, it was like, ‘Thank God, man. I'm ready to get some of those funny scenes.’ ” 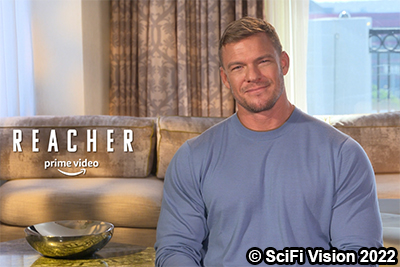 Ritchson also talked to the site a bit about the types of scenes he likes the most. “The scenes that I enjoy more are the ones where I feel like Reacher’s trying to play a character almost, like there's a couple times where he's got a plan, and he's trying to dupe somebody, so he'll take on a different persona…or he'll try and lead somebody down a path where [he's] setting somebody up for failure. And those are almost comedic scenes to me, and I greatly enjoy playing those. There's a few that I was looking forward to all season [that] I just couldn't wait to film.”

Regardless of the difficulties he’s faced, many fans of the book think he is the perfect embodiment of Reacher. It’s not the physical look of the character, however, that is important to Ritchson. “What matters to me is not as much the aesthetic,” said the actor, “as it [is] once they see these scenes unfold, do they feel like the Reacher they see the screen, as the season goes on, is the right guy? I want to know that this is well acted too…I care about the story and the way this lives on screen. So, I almost hope that people forget about the physical side of this and get lost in the story once it gets going.”

Not everyone has read the books, but most people know that Tom Cruise played the original Reacher in the film franchise. Ritchson finds it “surreal” that he’s playing the same role as the film icon, but he also wanted to make it his own and didn’t emulate the star. “I'm grateful for everything that he brought to this, but I wanted to make sure that I absorbed only what I found in the books and in the scripts. I feel like that's where I can honor this character best. I'm a bit of a behaviorist. I will naturally like pick up on traits that other people have, and I just wanted to avoid that, to be as true to this amazing, twenty-four books at the time, as I could possibly be, and I feel like if I did that, then I'm doing my job. And if I'm doing my job, I think we can create something that the fans will enjoy.” 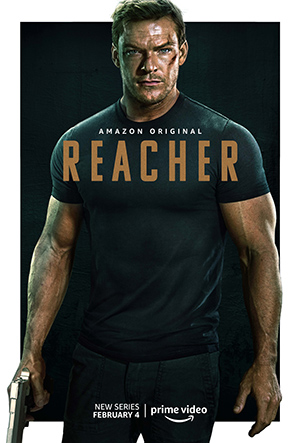 Ritchson thinks both fans of the original and new viewers will find something to like about the series. “There's just a lot to enjoy,” said Ritchson, “the mystery, the romance, the drama, all those elements are there. So it's just, it's good TV, it's fun, entertaining, it's a ride that you want to take and get invested in…This is one that you don't have to have read the books to feel that.”

The actor told the press that he loves how Reacher blurs the lines between good and evil. “I think we tend to like to pigeonhole our protagonist into understanding what's redeeming about them, and there's a lot that confuses that about Reacher; he lives by his own set of rules. He seeks justice; he wants to protect the innocent, but at what cost? I mean, there's a huge body count in his wake. So, he'll speak the language of the villain, in order to bring the villain to justice; it can blur those lines. I think that's a lot of fun. I think that's what makes it so interesting.”

The actor also added that he was surprised how funny the books are and it was important for him to capture that in the character.

For more, watch our included portion of the interview, and be sure to watch Reacher, available to stream now on Prime Video. Stay tuned for more interviews with the Reacher cast.
Twitter
BotonSocial por: SocialEmpresa
Category: Interviews