Tonight, Syfy premieres its new series, Astrid & Lilly Save the World. In the series, after accidentally opening a portal, monsters start coming through, and its up to high school students Astrid, played by Jana Morrison, and Lilly, played by Samantha Aucoin, to stop them, all while surviving high school.

While removing the threat of the monsters, Astrid and Lilly both get super powers, albeit strange ones. Astrid is able to smell approaching monsters, and Lilly’s leg starts hurting when they’re near. Morrison, while talking to Jamie Ruby of SciFi Vision during an exclusive interview, teased that their powers may change. “I can say that [powers] grow, as we do as people,” said the actress.

In disposing of the monsters, Astrid and Lilly get into some quite gross situations. “We've definitely touched some not so nice things,” said Aucoin during the interview. “They made these really realistic organs that were inside the monsters and we had to hold them out and dig our nails into them and squeeze goo out of them…It was not appetizing at all.” 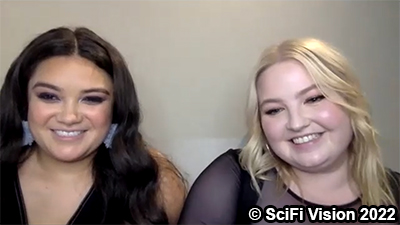 As much as the series is about hunting monsters, it’s also about how anyone can become the hero of their story, no matter how unlikely. The show deals with bulling and other teenage issues and gives a positive message. That representation of body positivity was important to both actresses. “[T]o be able to help with that narrative is an honor,” said Morrison.

Aucoin shared the sentiment. “It means everything, getting to be two badass plus-size women tak[ing] on this role of being these monster hunters, getting to be the hero, the unlikely hero. It's so incredible. I know I could have 100% used this show when I was in high school.”

Although Morrison does share Astrid’s confidence, she’s still learned to speak up more from her character. “What I've learned from Astrid is that she she is bold in telling you what she likes and what she doesn't like, and that's maybe something that I revert to not doing, but I've learned that I can speak my mind and what I think…My ideas are valid and important, just like everybody else's.” 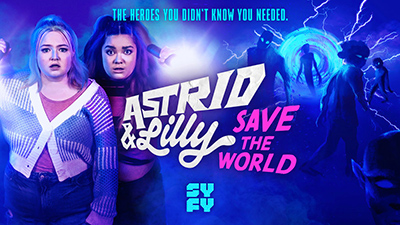 Aucoin admitted that she has learned to be more vulnerable from Lilly. “She wears her heart on her sleeve,” said Aucoin, “and that is something that it's been really tough for me to do, to be so vulnerable and to be so open. I think I really learned that from Lilly, and…[it] really helped me get to that place of just learning that it's okay to show your emotions, and it's okay to feel the way you feel, and it's not a weakness.”

Each episode of the season deals with the characters removing the weekly monster threat, and although there are a set number of monsters to return to the portal, the story does leave it open for more. “There definitely has been [discussion] and there will be a season two if we get one,” said Aucoin. “That is the plan…The last episode definitely sets up for one.”

To hear more, including what monsters are the actresses’ favorites, the possibility of a love interest for Lilly, and much more, be sure to check out the full video interview below, and don’t forget to tune into Astrid & Lilly Save the World, tonight on Syfy.