This season of Fear the Walking Dead viewers have felt that Strand has become much more ruthless, murdering people without thought. According to Colman Domingo, who stars as Victor Strand in the series, his character has always rode a fine line and been the antihero. “I think, in many ways, he has suppressed his own instincts,” the actor told Jamie Ruby of SciFi Vision in an exclusive interview, “but when he's let his own instincts thrive, he's seen the success of it.

“…Now, with this fallout, it's an opportunity for a clean slate. He just doing the math. He's like, ‘Well, I've done all these things, and I'm still a survivor. There must be a good reason for it. Why don't I decide to explore what it's like to do things the way I see fit and to have a civilization the way I believe it should operate, and not suppress it?’

“…So, this is the first time we see him living under his own operating systems, and it’s thriving. It may be harsh…[but] it's a working civilization, and he’s absolutely the head of it. The way he's doing it, it's very complicated, but the thing that he knows, is, at the day, it's working.”

The actor does believe, however, that Strand is being affected by his actions, even if he doesn’t think he is, and we will see how that plays out this season. 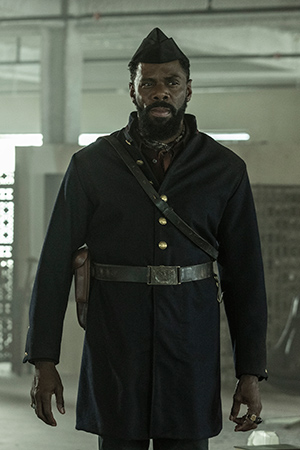 During the interview, the actor talked more about how Strand has stopped listening to everyone else this season and is making his own choices, why he took Baby Mo in the most recent episode, if he can ever learn to trust again, and more. Be sure to read the full transcript below and watch Fear the Walking Dead Sundays on AMC and AMC+.

SCIFI VISION:   Over the seasons, it seems sometimes like Strand’s going to do the quote unquote, right thing, and then he turns around and does what's best for Strand. I mean, that's kind of always what he does. Granted, he's kind of changed somewhat because of Alicia (Alycia Debnam-Carey), but I feel like, this season, he's a lot more ruthless. He's outright murdering people, which, at least, before, I didn't expect. Can you maybe talk a little bit about what has caused that change in him? Or maybe you feel like he's always been headed that way? Can you just kind of maybe talk about that and where his head is at?

COLMAN DOMINGO:   Well, that’s a great way to put it. I think that Strand has always been a very complicated character in The Walking Dead universe. I think that he's always rode a fine line; he's always been [the] antihero, always. I think, in many ways, he has suppressed his own instincts, but when he's let his own instincts thrive, he's seen the success of it. But yet, people still [have said], “Oh, you should do it this way; someone else is taking the lead.”

Now, with this fallout, it's an opportunity for a clean slate. He just doing the math. He's like, “Well, I've done all these things, and I'm still a survivor. There must be a good reason for it. Why don't I decide to explore what it's like to do things the way I see fit and to have a civilization the way I believe it should operate, and not suppress it for Morgan (Lennie James), for Virginia (Colby Minifie), for Madison (Kim Dickens)?”

So, this is the first time we see him living under his own operating systems, and it’s thriving. It may be harsh. He has very simple principles about trust and faith and how we operate, and I think that he's going to commit to it. You're watching, [and] there's vegetation growing; people are doing yoga. It's a working civilization, and he’s absolutely the head of it. The way he's doing it, it's very complicated, but the thing that he knows, is, at the day, it's working.

Do you think though he's affected by some of the things he’s doing? Because, like I said, I was a little surprised that he's kind of just killing. I mean, not that he hasn't killed people before, but do you think that affects him, or is he kind of just blocking all that out?

I think it does affect him. Does he believe it's affecting him? He does not believe it's affecting him, but it's absolutely affecting him. For a long time Strand did not kill. He did not kill for many seasons. Then, people would do the math of it, “Oh, he's never killed.” He's always killed walkers, of course, but he's never killed a human. Then, the moment he started to do that, I think it's an examination of what that does to a person's soul and how they must compartmentalize and…what it does to a person's psyche and spirit. So, I think it's damaged him deeply, and I think he doesn't even have a mirror to who he is. He had to eviscerate that mirror, and he's like, “Alicia is the mirror. Keep that separate; keep that separate, because, otherwise, I can't do the things I need to do to make sure that this civilization thrives, which are very harsh, villainous acts.” So, I think that, ultimately, I wonder, and I question. I wonder how, especially, in this season, you'll see how that affects him, how it affects his heart. It's like, he believes it's a pact that he's made with himself. He says that the problem that Virginia and Morgan and Madison all had was love. “I need to cut that out of my [life].” He’s one of those people who believes, “Once I cut that out, I can do what I need to do. That was their problem.” And he’s going to realize that problem is a human problem, and it's a problem that you're going to need to have, I think. [laughs] 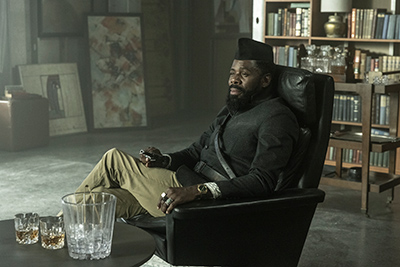 Right. So, I mean, is some of it now that he maybe kind of got a taste of power from Virginia? Because I felt like before he wasn't necessarily someone who wanted - and maybe you feel differently, but I felt like he wasn't really someone who wanted to be the leader and have that responsibility. I mean, he was in everybody's ear and kind of pushing things, but he never seemed to want to have that position. Can you talk a bit about that? I know you can't spoil anything, but what is his endgame, and why he is ready now?

I think from the very beginning Strand was his own leader. All he needed was help to get his boat to Mexico. He was a leader of his own universe, his own world. But then, people kept telling him, they kept challenging him, “That's not the right way to do things. Do it this way. Someone else takes the lead.” So, he always believed, “Well, maybe I'm not right, so I'll let them do this, because, apparently, I'm too harsh with it,” and that became a running theme. So, he could never be the leader that he needed to become. So, he was always sort of a suppressed leader in some way, because I think that he didn't he believed [them], and he said, “Yeah, maybe they're right,” at some point. He said, “Maybe I'm too hard, too harsh with it.”

Then, at the end of season six, he’s like, “Fuck that. Let me just explore this for now, finally, because the universe has done that. Now I'm on my own. We're going to rebuild this thing. I'm going to be the leader of my own universe, and we're going to see how that goes.” He said, “Because I tried it the other way.” He's tried it the other way many times, falling underneath someone else's leadership. He's like, “No, not anymore. I have to do it for myself. At least, if I'm going to survive, or if I'm going to fall apart, the world's gonna end. I have to do it the way I want to do it.”

Fair enough. I feel though like you can't always do everything on your own. I mean, you need people to some extent. I feel like, in this episode, when he was holding Mo, he finally had trusted Morgan, and then that was pulled away from him again, which I think was really, really sad, but, I mean, will he ever be able to trust anybody again? Can you just talk about that? I mean, does he need somebody else?

You know, that's a great question. I think that he doesn't trust anyone. I think it was just that brief moment, like you said, “Oh, okay, I can trust Morgan. We can do this thing.” It’s like, no, he can't.

So, I think just, if I was Strand’s therapist, first of all, he would be laid out on the couch for like hours every day and just wondering why it started. He doesn't trust anybody, because every time he trusts someone, it fails. So, I think that's the only map that he has. He's like, “I've tried it before, failure. I tried again, failure.” So, I think he's looking for that unconditional love, and I think even in the opportunity with Baby Mo, I think that's what he sees. He’s like “Here's an opportunity here.” Do I know that he wants to be the baby's father? I'm not sure exactly if it's that evolved of what being a father is, but he does know that it presents an opportunity for someone to actually trust and trust him. It's a baby. 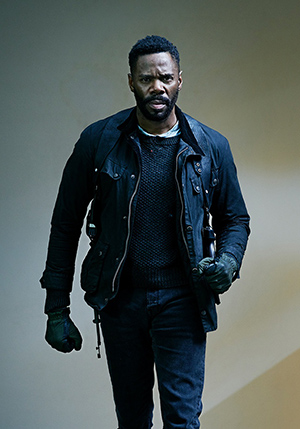 Okay, and that was kind of one thing I want to ask about too. When he said he was going to be the baby’s father, I almost felt that was more like, I don't know, a cruelty thing, because he wanted to hurt Morgan. You you don't feel that way, then?

I actually don't think it was about Morgan. I personally don't, because I never thought about that. I didn't think it was about Morgan; I thought it was about his own need, and I think it's a very compartmentalized need. Like, “Today, I need a hug. I need that baby, because being with that baby made me feel good.” So, I think that that's all he knows. Does he really want to be a nurturing father? I don't know if it's about that. Does he know he wants to hurt Morgan? I don't know. But he's like, “You know what I need? I need that thing. This my universe. I get what I want. Give me that thing that made me feel good.” [laughs]

Maybe he needs a pet first, though. [laughs]

That's true. All right. Well, thank you so much. I appreciate your time, and I'm looking forward to seeing what happens.

[laughs] That was great. You take care.