In the new Syfy/USA series Chucky, the murderous doll turns up at a yard sale and wreaks havoc in Hackensack, New Jersey. While the series centers on new characters, several stars of the seven-film Child’s Play franchise are also in the cast. Among them are Alex Vincent and Christine Elise, who are slated to reprise their roles as Andy and Kyle. The pair Zoomed with journalists this week for a spoiler-free chat.

Vincent is excited about the series’ focus on teen protagonists. “I do think that the inclusion of the kids around that age, which is a new demographic, a new audience for us, is fantastic,” Vincent told SciFi Vision, “because these kids grew up with Chucky being something that their parents loved, and now it's something relevant to their time as well.”

Elise noted that the diverse and inclusive characters are also drawing new fans to the franchise. This time around, Chucky’s unfortunate owner is a gay teen dealing with a difficult family and a vicious school bully.

“A friend of mine…has twin boys that are in eighth grade, one of whom is gay,” she said. “…His mind is blown that we've got a gay kid as the lead in the show, and not as a sidekick or a tertiary character. Now he thinks I’m the coolest person on earth. It's speaking to kids that haven't felt spoken for, and I think that's a really important thing, and I think it's going to bring a big new demographic to us because of that.”

Watch our portion of the interview and read the full transcript below and catch Chucky Tuesdays at 10 pm on Syfy and USA.


SCIFI VISION:   I was wondering if you guys could talk a little bit about the fan reaction, and I'm interested particularly in new fans, fans like me who were unfamiliar with the franchise until the television show. Are you reaching new people, and how are they loving it?

ALEX VINCENT:  Yeah, well, for fans that are just finding the show now, I'm curious first of all, if you're going back and watching the seven films, now that you're there, because as more of the story uncovers, it's definitely helpful to know where we've been, to know where we are now. But the reaction from fans, new fans and fans that we've interacted with for the past twenty years since social media, it's just been phenomenal. The reaction has just been phenomenal, united, and everyone's really rooting for us here, which is a really nice feeling in general. And I do think that the inclusion of the kids around that age, which is kind of a new demographic, a new audience for us, is fantastic, because these kids grew up with Chucky being something that their parents loved, and now it's something relevant to their time as well. And they get to share that with their parents, and I imagine a lot of young teenagers and people my age are watching the show together, and they're equally excited about it. So, that's fantastic.

CHRISTINE ELISE:  Yeah, I can actually anecdotally say that a friend of mine in New York has a twenty-year-old son who is a huge Chucky fan, but she also has twin boys that are in eighth grade, one of whom is gay, and it wasn't until this show that the gay twin got on board. His mind is blown that we've got a gay kid as the lead in the show, and not as a sidekick or a tertiary character. Now he thinks I'm the coolest person on earth. It's speaking to kids that haven't felt spoken for, and I think that's a really important thing, and I think it's going to bring a big new demographic to us because of that. 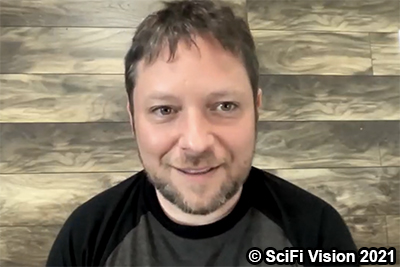 QUESTION:  The series follows the Charles Lee Ray origin story. So, he's back to be kill or be killed. Can you tell us a little bit about that perspective? How you guys approached that in the series, given that some of you have long-term through stories in the films, and how does that carry over to the series?

ALEX VINCENT:  Well, as far as our characters go, my backstory goes back to being five, six years old. So, that's well established, but learning more about this character, Charles Lee Ray, and what motivated him to become the way he was to begin with, I think it's something that fans wanted a lot and wanted for a long time and wanted to learn more about. It's also probably the most difficult to navigate as far as pleasing your longtime audience, because they all maybe have visions in their head of how this character became how he was to begin with. But I think Don [Mancini] just really masterfully is integrating it into the current story by showing little bits at a time. I think the actors that play these younger versions of Charles Lee Ray are just spot on, and I personally love all the exceedingly dark choices that this character has made. So yeah, for me, it's super fun.

CHRISTINE ELISE:  Yeah, I have nothing to add did that. That was well said.

QUESTION:  In terms of the character actor Brad Dourif, who actually does the voice and has been the voice for some time now, what is the dynamic when you guys are filming? Is he actually on set with you and throwing his lines? Or do you get some sort of track that you play off? How do you guys work that dynamic on set? 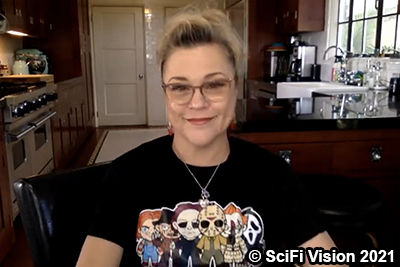 CHRISTINE ELISE:  The first time through, in Child's Play 2, I was already a huge Brad Dourif fan, so I was completely starstruck. We did a little rehearsal in an office on the lot at Universal. We did a reading through all the stuff that I had with him, so he'd know what I was going to be doing, so when he went to the recording studio to record it, he could do it with the right tone and know what he was reacting off of. But he's never on set, and I've never gotten to rehearse with him again. He does all of his recording ahead of time, and then they do playback on set with his voice that's been recorded, probably where he lives in New York.

QUESTION:  I was actually just curious, because this is long form storytelling, and you guys have come from obviously the movies of Child's Play, is there something character-wise that you guys got to explore in the series that you didn't get to explore with, obviously, in Curse [of Chucky] and Cult [of Chucky], and then with a cameo from Christine in Cult?

ALEX VINCENT:  Well, luckily, each time that I've come back to this, even starting from the sequel or part two, Andy gets to do new things in a new environment and tackle new challenges, but with the same "friend to the end enemy" of mine. So yeah, for me, it's rewarding to come back to the character no matter what we're doing. This being a series instead of a film didn't really make too much difference as far as - there's a lot of characters in the show so our scenes are rather scattered throughout the show. So, really, it's not much different to me than working on a film, a subsequent film to this story. It's just broken down in how we show it to you, but the amount of time that I'm spending with Chucky is comparable to the last film.

CHRISTINE ELISE:  Yeah, I think the primary difference here is for Don. Don has a lot more room to tell the story. Seven films over thirty years, let's call it ten hours or twelve hours of storytelling over thirty-something years, and now he's got eight hours of storytelling over eight weeks. So, it gives him the freedom to introduce so many new characters, the freedom and the time to have us meet these kids and become invested in them and also have our stories fit in there and then even room for backstory on Chucky. So, for Don, I think it's been a wide open wonderland for him, but as far as our characters go, it's the same.
Twitter
BotonSocial por: SocialEmpresa
Category: Interviews