Exclusive: Ted Sutherland on Percy's Journey on The Walking Dead: World Beyond Season 2

Recently on The Walking Dead: World Beyond, Percy, played by Ted Sutherland, put the group in jeopardy when he tried to kill Huck (Annet Mahendru) in revenge for her killing his uncle, but he was stopped in time by Will (Jelani Alladin). On tonight’s all new episode, when the plan is put into motion for Iris (Aliyah Royale) and Felix (Nico Tortorella) to pretend to get captured so that they will be taken to the CRM facility where Iris’s sister, Hope (Alexa Mansour), and father (Joe Holt) are currently staying, Percy joins them at the last minute, taking Elton (Nicholas Cantu)’s coat, pretending to be him.

According to Sutherland, who talked to Jamie Ruby of SciFi Vision in an exclusive interview, Percy is getting closer to Iris this season, but he’s still figuring things out. “I think he's finding himself…We're picking up right from where last season left off. So, all of the emotions are still very, very raw. And it's not like Percy is, or anyone is, a fully formed individual. He doesn't have his emotions figured out. He's not completely mature, but it's kind of his journey of becoming an adult, of maturing. I think he's figuring out all of his emotions, and love is one of them. And it's very complicated, especially when you don't trust, and you're not willing to be vulnerable.” 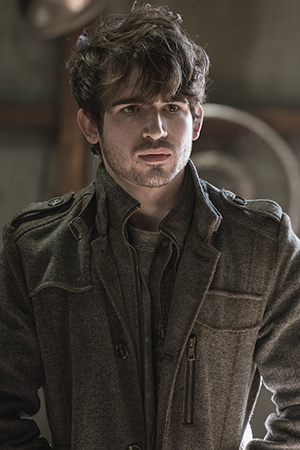 When Percy told Iris him joining them at the CRM was not about revenge, he was being truthful and has truly changed, according to the actor. “I think he definitely has changed, or he's in the process of changing…He's grappling with this idea of being vulnerable and accepting a community and being part of something greater than himself. He’s kind of entered into this group, and I think he has kind of mixed feelings on that. I mean, obviously he doesn't trust many people; he has no reason to.

“…I think he's just trying to figure out a way to deal with his emotions. Grief is such a terrible thing, and [Huck] did take away his closest family. So, he doesn't quite know how to deal with that. The first response is his anger. You want revenge, and that's not always for the best.”

During the interview, Sutherland shared some tidbits about working on the show and his insights on Percy this season. Read the full transcript of the interview below and catch The Walking Dead: World Beyond Sundays on AMC and AMC+.

SCIFI VISION:  Can you first talk about how when you got the role? Did they tell you what it was for? I know sometimes they give fake sides and things.

TED SUTHERLAND:  Oh, I got very real sides. I knew it was for The Walking Dead. I didn't know how far it would extend. I just thought I would be doing like three episodes. The character's name was different. It was Pacey. So yeah, I knew what I was going for, and I think they used the audition sides in the first episode I did.

Other than the script, is there anywhere else you took inspiration from when you were creating the character? Anybody you thought about, any characters or people or anything?

Yeah, I remember in the first season - maybe not people, but [laughs] this is going to sound very stupid. I was thinking a lot about cats.

Well, he’s a thief; I guess they're kind of stealthy.

I wanted it to be something feline, something a little feral, too. And I was listening to a lot of Oasis. I was very into Noah Gallagher, and I was like, maybe some part of me could get some of that assuredness, that cockiness.

Can you talk about Percy’s journey this season, the way he's changed - and I guess, has he changed? I mean, it seems like he has, but he lies a lot too.

Yeah, I think he definitely has changed, or he's in the process of changing. You know, we all are, not to be trite, but he's grappling with this idea of being vulnerable and accepting a community and being part of something greater than himself. He’s kind of entered into this group, and I think he has kind of mixed feelings on that. I mean, obviously he doesn't trust many people; he has no reason to. So, he also has a difficulty being vulnerable emotionally. So, being part of this group, this social structure, is completely different for him, but it's very important. So, that's his journey.

So, what he tells Iris, his reason for coming with them, do you think he's telling her the truth?

I guess, my question then is, do you think that if it won't put anyone in danger, is he still going to try to - and I know, obviously, you can't tell me for sure what happens, but is he thinking about trying to kill Huck again?

I think he's just trying to figure out a way to deal with his his emotions. Grief is such a terrible thing, and she did take away his closest family. So, he doesn't quite know how to deal with that. The first response is his anger. You want revenge, and that's not always for the best. But I would like to push back: I don't think he's a liar. I don't think so at all.

Fair enough. I assume though that eventually, they're probably going to be working with Huck. I mean, can they work together? Can they trust each other? Should she still watch herself? 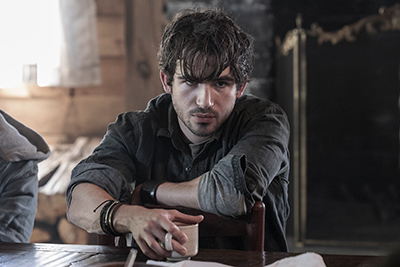 But I guess what I'm asking is he could maybe tamper down his emotions to to do things, to work together if he has to?

So, we haven't seen that much of him pretending to be Elton yet, just the solute in this episode, but did you talk to Nick at all about copying any of his mannerisms or anything like that? Or is it just that one bit?

It’s just the one bit. I mean, a little bit. I think the idea is a very funny one, [laughs] but, no.

Percy’s relationship with Iris is obviously growing this season, can you talk a bit about that?

Yeah, I think it plays to the same themes of unity and vulnerability. I think he's finding himself within that. I mean, if you really think about it, we're picking up right from where last season left off. So, all of the emotions are still very, very raw. And it's not like Percy is, or anyone is, a fully formed individual. He doesn't have his emotions figured out. He's not completely mature, but it's kind of his journey of becoming an adult, of maturing. I think he's figuring out all of his emotions, and love is one of them. And it's very complicated, especially when you don't trust, and you're not willing to be vulnerable.

It seemed like from the Zoom call with [Nick and Hal (Cumpston)] that you are all friends? Do you guys hang out at all? I mean, I know with COVID things are harder, but do you hang out at all, outside of filming?

I always love that that question, because everybody always wants everyone to be best friends, and often that isn't the case, but in this particular case, it actually was. We do get along very well, and we still hang out. Like I see Nico or hang out with Jelani [Alladin] or Hal or Nick, and I am genuinely very lucky that they were all very cool people and that kind of made the experience, the fact that we all got to get very close and formed genuine friendships. It was really cool.

Other than the COVID issues what do you find difficult the most difficult about playing the part?

Difficult? I don't know about that. I didn’t -

Is there a part maybe you find difficult connecting with, with him?

You just think of cats. [laughs]

I think of cats, yeah. [laughs] No, I think that, whenever you're playing a character, I think you kind of [intertwine yourself] with the character]. Parts of the character become you; you become the character, all that sort of stuff. So, I think my own [laughs] inability to be vulnerable was a very fun thing to play with this guy. And I think working through that through the character was very fun. So, no, I didn't find it difficult at all. I found it to be very therapeutic.

Do you I enjoy filming the action stunt scenes, because those seem like they would be a lot of fun.

Yeah. They turn out to be far more anticlimactic to film than you'd like, [but] they look cool when they come out. I remember specifically in the first season, I think in the first episode that I did or something, I was supposed to stab a zombie in the head. You want and you have this idea in your head of how that's gonna go, where you're going to be like, [motions stabbing a walker] “Fuck! That's awesome!” but really it’s just you pull [the knife] out. So, they're fun, but it's all very technical.

Do you get grossed out? I guess probably you don’t at this point, but have you ever gotten grossed out by the effects on the show? Or since you're on the set is it not like that to you? 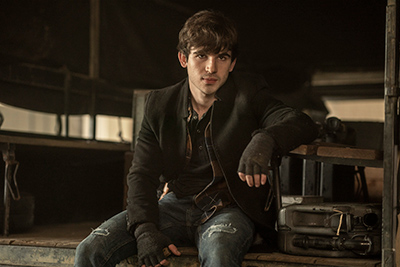 But it doesn't freak you out, I guess, like Aliyah. [laughs]

Aliyah would always talk about how scared she was of all the walkers in the beginning.

You can't look away, right? So, if there was a real zombie apocalypse, how well do you think that you would survive? Would you do well? Would you suck at it? And if you could take one character from any of the shows to help you, who would it be?

I know you couldn’t tell me if you were going to, but they have these other Walking Dead series and movies coming up. If you were to cross over on one of the other shows, is there someone that's on one of the shows that you'd like to get to work with, like on Fear or the flagship show?

Yeah, Coleman. I'd love to work with Colman Domingo again. I think he's a wonderful actor. I got to work with him when I was a little kid. He was such a sweet, sweet person and a brilliant actor, and just the success that he's having makes so much sense, and I love it. So, I would love to work with him again.
Twitter
BotonSocial por: SocialEmpresa
Category: Interviews