At the site of the La Brea Tar Pits in LA, when a massive sinkhole opens up, Izzy, played by Zyra Gorecki, and her father (Eoin Macken) are separated from her family when her brother (Jack Martin) and mother (Natalie Zea) fall into the hole and are transported to prehistoric times. La Brea actress Gorecki recently chatted with Jamie Ruby of SciFi Vision in an exclusive video interview about her time on the series.

Gorecki was only seventeen when she first found out about the role when producers contacted Camp No Limits looking to cast a girl with an amputation, but she knew right away she wanted the role. The actress said she couldn’t believe it when she got the part. “My brain has no concept of the magnitude of things. I got the role, and I was like, ‘It's not real.’ ”

The actress admires her character’s vulnerabilities. “I think Izzy is traits that I wish I had. She has this really special ability to be vulnerable, and that's a really, really hard thing to do.” 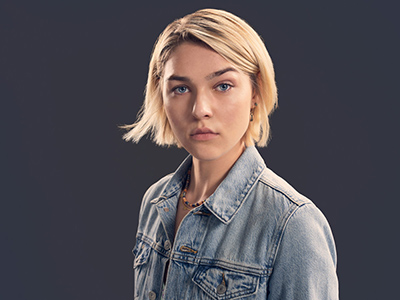 It’s that vulnerability that is a challenge for Gorecki. “I have a lot of difficulty with vulnerability as a human being, because it feels like a weakness to me, even though it isn't, even though it is strength. That was the most difficult part of playing Izzy, the vulnerability and everybody seeing that and everybody seeing inside your head and seeing your feelings everything. I think that was definitely the most difficult, because the physical stuff, I can do the physical stuff. I can do the angry; I can do whatever. It's the soft, the really delicate that's difficult.

“…I had an acting coach out in Australia, and I would immediately go to my first emotion when I was acting. I would go to my first emotion that I thought of, and she said, ‘Always find the path to that emotion and always find the vulnerability in situations.’ I think that's a lot of who Izzy is, is vulnerability and not immediately choosing a certain emotion, which is really good for people with mental health. You have to like backtrack and find the original emotion.”

Gorecki lives in a small town, so she didn’t realize at first how big of a deal it was being on the series and that she would be able to inspire others. “I didn't realize how big it was until I started getting messages from people. They were like, ‘You're so inspiring…As an amputee, I feel like I can do something, I feel like I can achieve my dreams.’ I didn't realize that I was going to have a platform that I could use to help other people.”

For the rest of the interview, check out the video below and watch La Brea tonight and every Tuesday on NBC.