Seth Gilliam plays the role of Father Gabriel on The Walking Dead, which aired tonight on AMC. This season Gabriel joined the mission with Maggie (Lauren Cohan)’s group to bring food and water back from Meridian to Alexandria, and recently, they have been hiding from Pope (Ritchie Coster) and the other Reapers.

Thursday, Gilliam talked to Jamie Ruby of SciFi Vision in an exclusive interview about tonight’s episode, why his character reacted how he did when he found the Reaper praying, Gabriel’s faith, what he finds challenging about the role, and more.

SCIFI VISION:   Can you start by talking about how you originally got the role? 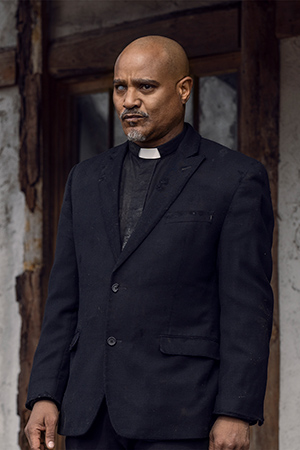 SETH GILLIAM:   Yeah. I read for Scott Gimple. It was me, Scott Gimple, and a camera person in the room. He actually read with me. The audition sides they call them, which are sheets of paper where your lines are written, were for a high school guidance counselor who was hiding secret. Apparently one of his students told him that he wanted to do something really violent, and the high school guidance counselor kind of blew him off. The kid winds up shooting up the school and killing himself. Then, his sister comes to confront the high school guidance counselor saying, “I know he came to you for help, and you did nothing about it.” So, it was kind of like a parallel to Father Gabriel's big secret of having locked his congregation out of the church. I had one reading with Scott, and I got offered the role like two or three days later.

You probably have since then regardless, but had you read any of the comics when you first got the part?

I had not. I am not a big horror fan; I'm more of a sci-fi kind of a guy. So, I hadn't read the comics, and I hadn't watched the show, because I thought that it was just a show about zombies. I was like, “I don't care about zombies.”

Then, when I got off the role, I can't remember which which media platform it was on, but I wound up watching the first four seasons on a Saturday, then re-watching them on Sunday, and then flying down Monday morning to be on set. It was quickly apparent to me in the first like ten to fifteen minutes that this was not a show about zombies; this was a show about people.

Other than the script and the comics, is there anywhere else that you were inspired by for the character, something or someone that you drew from?

I went to three churches on the Sunday before I did the second viewing of the show of the other four seasons, because I wasn't sure what his religious denomination was, Father Gabriel, whether he was Catholic or Episcopalian or what have you. I got a little inspiration from - it wound up being unnecessary - the various priests giving their homilies. Then, I went to the set and found out that I would not be preaching from a pulpit. [laughs]

Every episode you have to put the contact in, which I would think would not be too fun. It probably doesn't feel like a regular contact?

No, it's a hand painted contact that's specially fitted for my eye, and I can't see anything out of it, just big shapes, or light. Light kind of pours in through it, which is one of the reasons why I asked for a hat really, not so much for the look as it is to block the sunlight out, because it gives me searing headaches when light gets filtered in, because I think that my iris is like wide open trying to find images and try to see. So, when the sunlight comes, it kind of just pours into my head.

Does it make it harder? I mean, guess it helps you maybe with your role in a way, but I would think that would still make it a lot harder to think and to keep doing your lines.

And I quite like the look, and I like the effect mostly that it has on other people who I'm talking to. They can't seem to draw their eyes away from the dead eye.

So, then, what do you find the most challenging?

Grappling with his faith I find the most challenging aspect of playing the character, nothing really physical. It's more psychological, more mental than anything.

Do you like the physical part of it, though, the fighting part of it?

Has there ever been anything that you can think of specifically like a walker or effects or something that's really grossed you out?

The meat ponchos that that we had to slather ourselves up with when the walker hoard breaks through the walls of Alexandria and Father Gabriel takes Judith (Cailey Fleming) to safety, that still, even the memory of that grosses me out, but the effects that the special effects team puts together, the makeup people, are so kind of tactile and real and just kind of foul that it's really easy to to be grossed out by.

A little bit, a little bit. Mostly, the pandemic, for me, is bit about isolation, and I'm not sure that The Walking Dead is about isolation. So, it's kind of hard to transfer the one thing into the other. 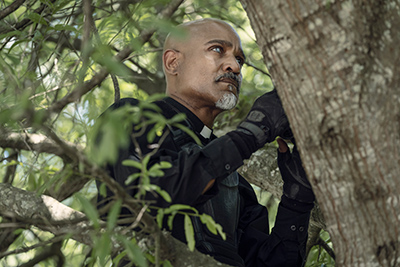 So, I wanted to talk to you about this episode. Obviously, he lets the Reaper go, but in [episode three], it ended a lot differently, because he killed the man.

Can you just kind of talk about what it was that made this time different, and what it meant to him that he didn't spare the other guy?

I think what made it different was that he was taken aback by the fervor with which he’d watched this Reaper priest praying. I think it was something that Father Gabriel had not done himself in quite a while, tried to have a private conversation with God and truly listened for his voice. I think he was taken aback in that way. I think the first guy he did not let go, because he couldn't hear God's voice when he tried praying before pulling the icepick out of his leg. So, he figured that he was on a mission for himself and for his group, more so than on a mission from God. So, that guy couldn't be spared.

How much does it still affect him and affect his faith that he was able to do that, kill someone?

I think he's fallen into a darker place where he's not really thinking about the effect to him emotionally or psychologically. He's just thinking about what has to be done at a task in front of him at the time. And though he may not be hearing God anymore, he's kind of driven by his own internal mechanism to dispatch of evil people.

That's part of my other question then; you sort of answered it, but does he still have faith?

I think he's got some faith, but it's definitely being challenged at this point.

I was thinking back to a previous episode, this was the end of last season, where your character was with Aaron (Ross Marquand), and they were together with Robert Patrick's character, Mays, and Father Gabriel killed him. I was thinking about that and what Aaron did in the recent episode. Do you think, and this is just your own opinion, but do you think that affected Aaron and maybe influenced the way he acted like he did when he tortured the guy in the other episode, letting him get bit by the walker? Do you think that perhaps that maybe really changed him?

I think he did have a bit of a profound effect on Aaron, because I think it was something that he did not see coming from Father Gabriel. If Father Gabriel is capable of this kind of nihilistic view of the world, then hope is a little lost.

I don't think this has happened for Father Gabriel yet, but I know this week's episode is about Maggie learning to have to walk like a Whisperer. I'm just curious. I know you can't tell me whether he actually does or not, but, I mean, how would that affect him in his faith? Would you be okay with [wearing someone’s face like] that? Because I would think that would be something that would not be so easy.

I think I probably know the answer to this, but I'm going to ask. Thinking back to the beginning with what originally happened whenever Gabriel let the people in the church die, if that had happened now, how do you think that that would have been different? Even if it was people he didn’t know? I mean, do you think it would have ended differently? Because I feel like he's changed a lot from back then.

Yeah, I think, at this point, Father Gabriel would have had a very different response to people's cries for help.

On the flip side of that, though, do you think that there's a line he won't cross? I mean, because obviously he has killed somebody now.

Yes, I'm not sure if there's a line he won’t cross. I think old Father Gabe is capable of pretty much anything these days.

Do you have a favorite scene that sticks out to you?

I still think the confessional scene in the church where Rick (Anthony Lincoln) confronts Father Gabriel about what he did, and Father Gabriel breaks down and confesses about basically locking his congregation out and leaving them to fend for themselves and ultimately die is still kind of one of my favorite scenes, because it was one of the first things that I did on the show, and it had the whole cast assembled. That's still a really cool memory for me. 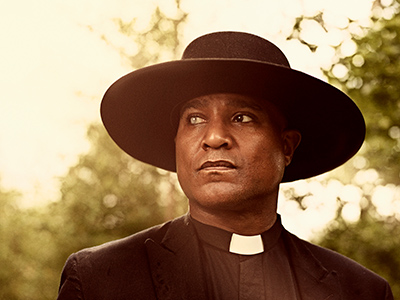 Speaking of memories, not necessarily a scene, but is there a memory that you have that kind of sticks out? Like the thing that if you thought back to this show ten years from now, what's the one memory that would stick out as being something really special?

Yes, it's something that Andrew Lincoln said to me when I was first on the show. We were preparing to do a scene in the church, and he turned to me, and he said, “I hope our characters become friends, because I'd really like to work with you more,” and I hold on to that.

Is there somebody that you'd like to have more scenes with that you haven't gotten to work a whole lot with yet?

You probably can't answer this, but there’s going to be a Daryl (Norman Reedus) and Carol (Melissa McBride) spin off and different things down the road. Do you have any idea - have you been approached to maybe do something beyond the The Walking Dead series?

I have not been approached, and I don't know if there's any plan to approach me or include the character of Father Gabriel in any of the other Walking Dead shows. I mean, at this point, I'm just hoping to survive.

[laughs] Yeah, I guess it depends on what happens. I know he's not alive in the comics.

Can you describe Gabriel in three words?

Okay, that makes sense. Now, I’ll end with asking you a silly question. I don't usually ask this for The Walking Dead, but why not? If Gabriel had a theme song, what would it be? I don't know why I thought to even ask that. [laughs]