In tonight’s all-new episode of The Walking Dead, Carol (Melissa McBridge), Kelly (Angel Theory), Magna (Nadia Hilker), and Rosita (Christian Serratos) go after the horses to bring them back to Alexandria. Magna also confronts Carol for keeping Kelly’s hopes up that her sister, Connie (Lauren Ridloff), will be found alive, thinking she needs to move on.

Earlier in the week, actresses Hilker and Theory talked to Jamie Ruby in an exclusive interview for SciFi Vision about what happens in the episode, how it may affect things moving forward, how Kelly is not limited by her hearing impairment, and more. 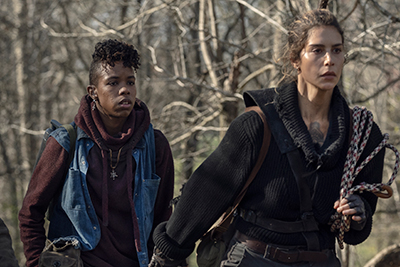 SCIFI VISION:  This question is for you, Angel. We're seeing a lot more characters with hearing loss in popular culture lately. There's the new movie, Coda, and recently, Sound of Metal, all of that. Can you talk about what it's like in the industry now, for you, with them being more supportive of artists behind the scenes, as well as what it's like being like a role model to the deaf community, and also being able to share your story as part of your character’s storyline?

ANGEL THEORY:   I think it's beautiful we're living in a world now where representation is more important and needs to be seen more, and there needs to be people at home that can just be reminded, “You can do this too,” and “You're not excluded out because you're not this or you're not that.” I think the more we get to represent people and certain groups of communities that just aren't really seen as much or people are not really educated enough about, I think that's really allowing the world to be more open-minded and open-hearted and get that education that they need. I also feel like they can connect with the things that they watch, and I'm really blessed that Angel Kang and the writers allowed parts of my own life story to correlate with Kelly’s storyline. And I think I've been able to see over the years something that I thought was actually, I guess I could say, like a downgrade of my life or something that made me feel less than or less worthy of a person, and I was able to find comfort with the people that surrounded me with love, because they actually were able to open up and say, “Hey, seeing you made me realize this and helps me feel more brave and confident.”I'm really loving all of the representation that we're starting to see more and more. It's a beautiful thing, and I hope it continues and gets better.

SCIFI VISION:   Nadia, can you talk about how Magna is dealing with Yumiko (Eleanor Matsuura) being gone and maybe not coming back? Has she thought of going after her? Is that maybe something that could happen? 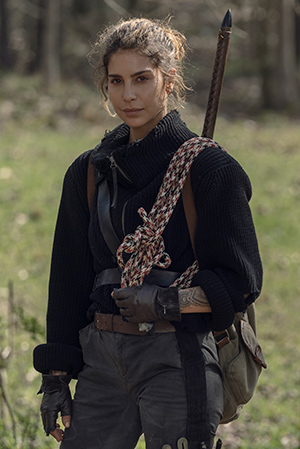 NADIA HILKER:   I think, for now, [with] the guilt and the pain of Connie being lost and seeing Kelly struggling, she definitely puts Kelly first over everything. Taking care of her and trying to [lessen] her pain, which I think she sometimes fails to do, is her number one priority.

Obviously, she thinks a lot about Yumiko. I think, deep down inside, she's not too worried. I think she's very optimistic and feels that she's okay, but obviously that still crosses her mind, and [she worries], but I think the second that thought crosses her mind, she needs to stop it and just come back to really focusing on Kelly. Also Magna does not think that Connie is dead, but it's like, you know, parenting, and she just struggles and just tries to do her very best to protect Kelly.

SCIFI VISION:  Okay, and this question is kind of a continuation of what you're were just saying - for both of you - but obviously in this week’s episode, Magna is worried about Carol getting Kelly's hopes up. Can you just kind of tease at all if that is going to become a problem later on? Is there anything that you can say about that?

NADIA HILKER:   I mean, what I can say, is that being the bad cop is not a fun job. I mean, Magna would love to just keep saying every day “Connie's out there; we're going to find her tomorrow,” but she believes is not the right thing to do. Then, having Carol doing the good cop thing is something that Magna struggles with. There's definitely beauty coming out of it, but it's definitely territory that Magna is not used to being in. And I mean, I really have to say, I don't know yet. I have a feeling it might, but I don't know yet.

SCIFI VISION:  Do you have anything to add to that, Angel?

ANGEL THEORY:   I think it's really nice to see - I mean, Magna, I think, used to think about herself a lot, but, I think, now she’s…becoming this maternal person for Kelly and, thinking about her with every step that she makes. You know, she's filling in for the role of Connie right now, which is just, the big sister, and making sure, of course, that Kelly’s safe, and everything's okay. And I do think Kelly's torn between Magna and Carol. She has a respect and love for Magna…but at the same time, I don't think she's getting the full mental belief and hopes that [Magna] wants her to have, and Carol's kind of feeding that to her, which is making their relationship a little bit closer and more connected. And for me, personally, watching that scene after Magna and Carol had that conversation, and then it goes to Carol asking Kelly, “Hey, you're ready to go?” I felt like that was so awkward. 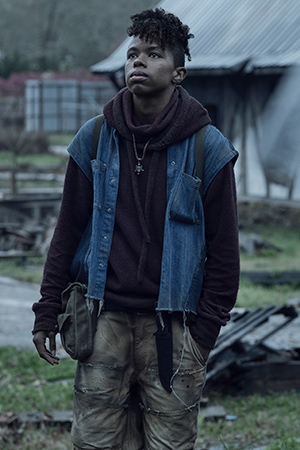 ANGEL THEORY:   It was like, Kelly has no clue what just happened behind her back, but, you know, it goes to show, these are two very different women that have very different mindsets and go about things differently. However, they both love Kelly, and they both want the best for Kelly, even if they agree to disagree sometimes. And I think it’s just beautiful how even though everybody's different, we always find a way to still love and care for each other, even if it's in our own way.

SCIFI VISION:  Obviously, Kelly is losing her hearing at a bad time, because it's during the apocalypse that she's having to learn to acclimate to not being able to hear. Can you just talk a bit about her mindset, of how that's affecting her? Or maybe it's not affecting her, but, I mean, could that maybe cause any issues down the road?

ANGEL THEORY:   I mean, I think we're past the crybaby phase of like, “Oh, my God, I’m losing my hearing.” We know this now. This is not something that I think Kelly's honestly dwelling on. She has a whole bunch of people that she's learning from that show her these different talents and skills. You know, she's not dependent on her hearing, and her hearing doesn’t make her less than the badass that she already is, period, point blank. She has a sister that showed her throughout this whole time, to observe, watch, and be stealthy when you need to be…You just don't need [to be able to hear] in order to survive. And I think Kelly's found her confidence. She's found her footing, and she's around people that have been supportive, even with not having her sister around throughout this whole time. After the cave situation, she has a group, the whole community, that is learning sign language for her as well, even to the point where, like, Kelly, Magna, Rosita, and Carol were all out, and we can't really talk throughout the horse scene, but, you know, we're signing to each other. And everybody's starting to be more open minded and allowing that accessibility to happen as well. They're not treating Kelly like, “Oh, this is the little deaf girl that can't hear” or anything like that. No, she's an equal. The only thing she can't do is really just hear. That's just her own life and her own storyline as well, and later in the future, I think the main message is that you don't have to have your hearing in order to still make an impact and to still be just as strong a character. So, I think with her and the people that are around her, they're all just really supportive, no matter what the situation is.
Twitter
BotonSocial por: SocialEmpresa
Category: Interviews