KIN, which premieres tomorrow, September 9th on AMC+, is an eight-part drama that follows a tightknit Irish crime family in Dublin, the Kinsellas, who ends up in the middle of a gangland war with an international drug cartel after a boy is killed. They may be out-numbered and out-gunned, but they have the unbreakable bond of family.

Recently, stars Charlie Cox, who plays Michael Kinsella, Aiden Gillen, who plays Frank Kinsella, and Clare Dunne, who plays Amanda Kinsella, and creator and showrunner Peter McKenna talked to the media during a panel as part of the TCA summer tour.

McKenna talked about setting the series in Dublin and a bit about the crime family that is presented and how it is similar to a New York crime family like the Sopranos. “It's set in Dublin.  It expands out from the docks, and we do visit other parts.  What we really were careful to do, I suppose, was present Dublin in a way that we hope hasn't been seen before in other TV shows or films.  So, we tried to pick locations in places that felt fresh and new. Are they like the Sopranos? The Dublin crime scene will be slightly different, I imagine, than the New York one, where in Dublin there's quite a lot of gangs. Some of them work together, some of them work against each other. So, it would be based more on a Dublin model of a family who were involved in crime who have an area within Dublin that's theirs, but by and large, until they're actually fighting with each other, a lot of these gangs work together, bring drugs in together. They end up falling out and killing each other and then forming new alliances. So, it's a slightly different model. 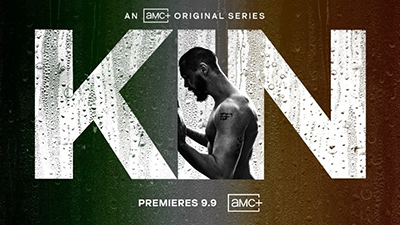 “The other thing that's slightly different, I think, between Ireland and America, I'm just going to say this now, is that Irish people have a very unique relationship with gangland, and I really wanted to get that across in this show. It's where in Ireland, like we had a major criminal arrested last week and it's been on the front pages…We treat them a bit like reality stars, and we have this obsession with them, and I suppose that’s what really interested me in this world, what’s it like to be this family in this world where you’re almost like mini celebrities, but you’re also criminals, and you have all the dynamics of a family.”

Dunne talked about playing Amanda, and what drew her to it. “At first, I think it was just the writing itself was so powerful. I really felt like I was reading somebody very unique, to be honest, and that drew me in, and straightaway, but I feel, certainly, a little bit like Carmela in The Sopranos sometimes. There’re elements of that, but then there’s also parts of it make me think of the police officer in Happy Valley that Sara Lancashire played, like where there’s sort of a mission or there’s like a determination and a lot of thinking and strategizing. So, I feel like there’s so many layers. So, I don’t know if I could just say one other character would influence me, because there’s was always so much to do as Amanda. There’re so many layers, so, to be honest, it was just the words on the page for me and going from there.

“…Playing her was incredible and probably one of the turning points in my career, because up to that point I’ve only had a little bit of screen work. I’ve never done a shoot for longer than five weeks, so to get to play a role for that long and go on such a long journey with a character, it was a massive thing for me, but also one that’s so full and so involved with so many of the other characters as an ensemble cast. I just felt very like bonded and part of something very strong by the end of the process.

“…I think she definitely goes on a very interesting journey. I think it’s a slow burn of a series that then builds momentum, and I think you see that, especially in the final two episodes. You definitely see Amanda dare to do some more stuff.”

Cox said that he was excited by Amanda’s journey as well. “I had a few scenes with Clare early on where we were kind of rekindling a potential relationship from the past, and then there was one scene in particular where you start to see a turn in her, in that character, in Amanda, and it genuinely took my breath away. It was like I saw a different side to a human I’d already met, and it was really powerful. It made me, if I wasn’t already excited about the show with what Peter had done, it made me really excited for people, too.  That’s, I think, the thing I’m most excited about people seeing is that journey that Amanda goes on.”

He also talked about the importance of his character’s relationship with his daughter in the series. “We meet a guy who's led a certain life and having had a serious wakeup call and spent the majority of his daughter's childhood locked away, he's looking to make up for that lost time as much as possible. And it pains him greatly. You know, I kind of spent most of my time working on that feeling and the desire to withdraw and alienate himself from the life that he's lived up until that point. [I] hope that there's enough in there that helps you kind of recognize that he's capable of the stuff that he's done in the past and what he then ends up doing in the show so that you get both sides of it.”

Another thing Cox discussed was the difficulties in perfecting his accent for the series. “I find it really hard. Also, a few years ago, I did a Northern Irish accent, and I thought that would help me in the process, and, actually, I think, if anything, it probably hindered it, because I found that there are some sounds that are so similar, and I found it very hard to get out of the intonation and the cadence of the Northern, because it was just [that] my sense of memory was there. So, a lot of the ADR I’ve done hasn’t been around sound so much as it has been around kind of the way I finish sentences, and going up at the end, and that kind of stuff. I found it really intimidating to be on set with an entirely Irish cast. Hopefully, the accent is passable…I take it very seriously. I work really, really hard. My accent coach, Paul, was unbelievable and a huge, huge credit to him, if it works. If it doesn’t, it’s my fault, not his.”

Dunne and McKenna both praised him for doing an amazing job, as did fellow star Gillen. “It does work, and to Charlie’s credit, he kept it up all the time. We did a reading early on, and I knew from then that it was totally [right]. Not that I was thinking about it. I wasn’t thinking, ‘What’s this accent gonna be like?’ at all, but it was kind of very obvious that it was gonna be the right voice for the character, because there's a lot of different kind of accents, but it suited the character. That was the thing that I really noticed. I thought, ‘That sounds like that guy’s voice,’ you know, it’s reserved. It’s low key.”

Gillen also talked about both his own character as well as the others making rash decisions. “Frank doesn't always make the right decision, either. I would say he's pretty measured, though, very thoughtful, reticent, not too hotheaded, except when he can't help but be hotheaded, and I guess that's his weakness is a streak of inability to hold a temper. But all these people are involved in crime. There's always an undercurrent of violence. So, in a way...we're all as responsible as each other, of course I have the wisdom of experience and age. It's not unexpected that the younger, hotheaded members of the crew would be the ones who are getting out of hand sometimes.  So, I think it's all pretty realistic, in terms of structure of an organization and that dynamic of temper and experience.”

Be sure to check out KIN on AMC+.
Twitter
BotonSocial por: SocialEmpresa
Category: Interviews