Today, Hulu premieres the new comedy series, Only Murders in the Building. The series follows a group of true crime fans who become unlikely friends when they stumble upon a murder of a fellow tenant and start their own true crime podcast. The series stars Steve Martin as washed-up 1980s television star Charles-Haden Savage, Martin Short as unemployed Broadway director Oliver Putnam, and Selena Gomez as home renovator Mabel Mora. The three also serve as executive producers.

The three stars, as well as executive producers John Hoffman and Dan Fogelman, recently talked to the press during a panel for the series as part of the TCA summer tour.

When talking about how the series came to fruition, Fogelman said that it was because of a lunch he had with Martin that he decided to move forward on the project, because he was still working on his series, This is Us. “I like to get really involved and be involved with the scripts and the edits, so it kind of took something special, and when Steve had said the idea, and the opportunity to work with these three guys, that was kind of the thing that moved it forward, not the fact that it was different or similar to the other show.” 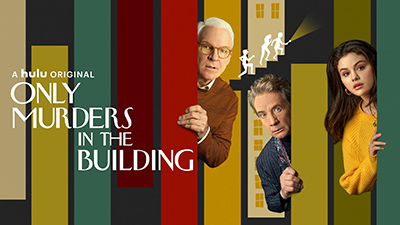 Short said that he hadn’t expected to do a series with Martin. “We've been doing an extended tour of our two-man show for many years now, so we certainly had that, but to extend it to television…up until Steve had his meeting with Dan and they got thinking about the series, he and I had never talked about, ‘Hey, we should do a TV series together.’

“…And the experience was as happy and joyful and creative as you could dream it to be.”

Martin agreed. “I think we're very lucky to have this late in life after we've done a lot of our work, and to have this thing that's so much fun and creative, I mean, I wasn't even going to be in this, and I sort of thought, well, I'll do it if Marty does it.”

The actor admitted that he has listened to a lot of podcasts on true crime and said that the idea for the series came because he was interested in the subject.

Hoffman expanded on the idea for the series, “It was the combination of this incredible comedic cast, and then, the idea of true crime lovers coming together and attempting their own podcast seemed to write with sort of possibilities comedically. So, yes, it’s a little bit meta on the podcasting world and the true crime world together.”

Fogelman added, “Steve’s a deep well when it comes to podcasts, as is John. I think the idea [is] that these guys have a take on a podcast as amateurs and they’re kind of running around with boom mics and, certainly, this isn’t the way that the average podcast is made, but I think we own that, and that’s part of the comedic principle of the show.”

Gomez talked about what initially drew her to the project. “What I’d say is the level of sophistication of the material is first the reason why I wanted to do this. [On previous Disney projects] I was a kid; I didn’t know what I was doing. I was just riding around on set. Now I just feel like a sponge, and I soak up all the wisdom that I can. It’s really nice to be back on TV, and it’s nice to be casted as my actual age, which never happens.”

She continued to talk about working with such comedic legends. “I was very nervous, to be honest, because I didn’t know what to expect, because sometimes I find that comedy people can sometimes be a little bit distant, and so I didn’t know what I was getting myself into. And now I have like these two crazy uncles in my life that basically give me boy advice, and I sing rap songs to them.”

The actress learned a lot from the veterans. “How they lead a set is so commendable. They are so humble, and they are kind, and they are there until the very end, and they just really [have] set such an example for me. They’ve been doing this longer than I’ve been alive, and if anything, I would be so lucky to have a career that lasted that long…I love the way they talk to people. I love the way that they just come to set and make everybody feel good, and that makes me want to be that and do that more…I’m just so lucky. I just sit down and laugh all day.”

She also appreciates their sense of humor. “What I think is really special is that they have a sense of humor that doesn't exist anymore, in a way. I love that they have a sense of humor that's not the typical, like, crass, or kind of dark. It's very light, and I think for me, that was something that I really appreciated. But I have to be honest, I don't know if I'm a good actor. I just do my job. And I just really hope that I can live up to, you know, these incredible people. I will say, though, I learned a lot from the first episode to the end. I even made a joke to John about, like, I wish now I could redo the entire first episode, because of how developed I felt towards the end.”

Martin, who said that he knew Gomez and her music, even if he didn’t know all of her acting work before she joined the cast, had high praise for her. “I believe when Selena's on screen, the show is suddenly elevated. It's more mysterious, it's more interesting. There's an old cliché, the camera loves her.”

Short, who also praised Gomez, talked about the three of them having different approaches, “What I love about the end product of the show is the three different energies of the actors. I kind of play it very real. Steve goes way over the top, and Selena grounds everything in this kind of dry, hilarious delivery. The combination, I think, is perfect, and it was a dream to work with this brilliant, young lady.”

He also praised Martin. “His agenda is to make the set loose and happy because that's the playground. He is never temperamental. He always knows his lines, and if he doesn't, he does jokes about it that gets everyone laughing and then it becomes a better take. That's been the way it's been since Three Amigos for me.”

The two also agree that they get along well and aren’t competitive with each other either when it comes to getting lines.

The actors and producers also talked a bit about the other actors they got to come on the show, as well as the small cameo roles. Hoffman attributed the ability to get a lot of people signed on to the project to the three stars. “I would only say this; these people that we were so fortunate and lucky to get, for various reasons, but the headline reason, obviously, are the three people in the show. The minute you said what we were doing, it was much easier to sort of have Nathan Lane say, ‘I’d be interested to do more’ and have Amy Ryan say [she would do it]. They were all coming towards us, which was a real gift…We had plethora of dreamy New York theater actors, legends, some in the theater that are in the show, and I think [it’s] the balance of reality with the fun of seeing people you’ve seen in different roles.”

Surprisingly, the show was originally not set to necessarily even be a comedy. Martin revealed, “It was conceived not for me and Marty Short and Selena Gomez; it was just conceived as an idea that it would be cast. It was actually conceived for older actors…the comedy actually came after. The comedy came because of the casting. If you had cast three serious actors, it’d be a very different show, but the comedy just occurred through the writing and through the performances, I think.”

Be sure to check out Only Murders in the Building, now available on Hulu.
Twitter
BotonSocial por: SocialEmpresa
Category: Interviews