Tonight, AMC aired the newest episode of Fear the Walking Dead, “The Holding.” In the episode, Alicia (Alycia Debnam-Carey), Luciana (Danay Garcia), and Wes (Colby Hollman) are brought into the underground compound they secretly approached where they plan to find out more about the group that have been leaving the spray-painted messages. The doomsday group turns out to be more of a cult, and we are introduced to the character of Riley, played by Nick Stahl, who works under the leader, Teddy (John Glover).

Friday, Stahl talked to Jamie Ruby of SciFi Vision in an exclusive post-mortem interview about the episode, his character, and what fans can expect.

***Note there are spoilers for 611, “The Holding,” in the following interview. Please watch the episode before reading.*** 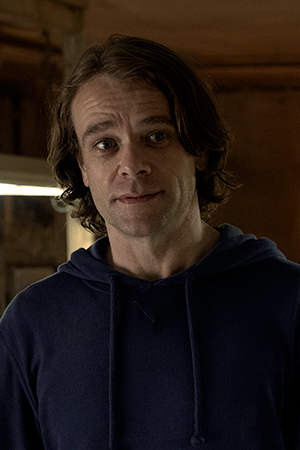 SCIFI VISION:   I enjoyed the episode. I watched it last night. I'm wondering though, you're probably not allowed to say a whole lot, so I'm not sure how these questions are going to go, but we'll see, I guess. [laughs]

NICK STAHL:   Yeah, they've definitely given me some strong guidelines. So, I have to watch out for that, so I don't get in trouble, but I will answer what I can, for sure.

We really don't know much about Riley at all. Is there anything about his backstory that you're allowed to tell me, like where it comes from? Or just kind of in general?

All I can say, really, I guess, is just that it wouldn't be unlike anyone else that sort of joins, let's just call it a cult, in that, you know, a lot of times people, Riley included, are in sort of a vulnerable, impressionable state and subject to being influenced by groups like this, by leaders like Teddy. So, that was part of Riley's story, but beyond that, I can't any details.

I mean, it sounds like you're going one way with it then, but my question was, we have somebody like Wes’s brother, Derek (Chinaza Uche), who seem’s like he’s brainwashed, but Riley definitely seems to know everything. He knows all the secrets, and he seems to know what's going on.

Can you kind of talk to that a little bit more? I mean, is he more part of it and in on it, as opposed to just being brainwashed?

The way that I viewed the Derek character was more like he's on kind of a pink cloud a little bit. So, I feel like Riley has been part of the group and following Teddy for a lot longer; he's just been around a while. So, maybe he's lost that kind of like glaze in his eyes a little bit.

That's one thing, I mean, in watching the episode, I was kind of struck by even some of the background players. I was just like, “Yeah, they look a little too happy; they've got that kind of cold vibe going on.” But, for Riley, I kind of pictured that he maybe had more of that in the past, but maybe that kind of luster has kind of worn off a bit, but he's every bit as loyal, faithful to Teddy, if not more. But, yeah, I kind of saw the Derek character as not having been with the group very long, so he's kind of on a high.

Well, it makes sense. So, you say he's definitely loyal and faithful, then, would you say there’s no way that this group could persuade him? I mean, he has definitely drunk the Kool-Aid, so to speak?

Well, I mean, I don't think he knows Morgan (Lennie James) or Virginia (Colby Minifie) or these people any more than the sort of stories that he's heard…It [would be] interesting if Riley had encountered Morgan's group when he met Teddy. Maybe he would have gone a different direction, but he's certainly committed to Teddy and their cause, for the time being.

What can you tell me about his relationship with Teddy?

Not much, I mean, other than he kind of used him as a father figure, as definitely his leader, and just, you know, he’s like a family member. I mean, Riley is willing to sacrifice himself for the group, or just for Teddy, actually, you know, that kind of, I'd say, blind loyalty at this point.

Can you talk about working with John Glover?

John's great. John's a lot of fun to work with. He's just like an old New York theater dude who loves musicals, and he's always singing, and he's much younger than his years. I mean, he's got tons of energy, and he's just a really fun guy to work with. I think every time he was on set, it just was infectious, and he was just such a fun spirit for everybody. So, yeah, I had a great time with him.

Can you kind of tell me, I know you can’t say any specifics, but can you tell me some of the people maybe that you get to work with in the next episode? I know, we see in the preview that at least you definitely have scenes with Morgan. Can you kind of say anything about that just kind of who you're going to get to be with? Or are you not really allowed to? 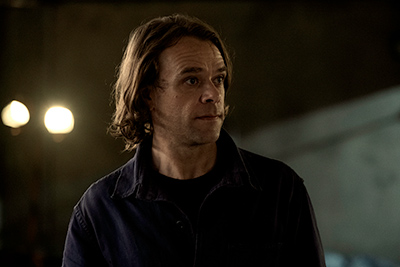 I’m sorry. I’m afraid of getting in trouble, and they basically said anything beyond [Episode] Eleven - You know, I could say probably, I'm around some new characters than I was in Episode Eleven. [laughs]

Okay then can you talk about working with Alycia Debnam-Carey?

Alycia's awesome. She's really very sweet and works really hard on the show. You hang out with her, and…you're like, “Oh, yeah, she makes total sense for this character.” She's very cool, as was everybody on the show. I had a really great experience working with everybody. [It’s a] very welcoming, very tight knit group, and [we] just had a lot of fun. It's just a really good, really good group.

Do you have any stunts coming up? Not that you can tell me what they're about, but do you have any action scenes? I assume you probably do.

Yeah, there's more action stuff that happens for the character, but I can't say [anything]... [laughs]

No, no, I know. I assume though you enjoy that kind of stuff. I mean, you've been obviously in a lot of different things like that before this. This isn't new for you. So, I assume that you enjoy that part of it?

Yeah, I enjoy all of it really. I enjoyed the whole job, to be honest, and tackling any kind of challenges or any kind of anything new that I haven't done before.

That was a really cool thing, actually, about this show, because they are so secretive - and it's not just with you guys, but it really was with the actors too - I didn't know what I was going to be doing from one week to the next. So, it was exciting to sort of get new material and read and see what I was going to be to doing [next].

You talk about them being secretive and everything. I mean, did you get asked to do this? Did you audition? And if so, when you first did, did you know what it was for?

I did audition, and I knew what it was for, I just didn't know anything about the role, and the scene, actually, that I auditioned with turned out to be kind of a decoy scene. So, it wasn't anything that I actually filmed; it was kind of disguised as something else. I knew that it was Fear the Walking Dead, but, I had very limited info on the character or anything like that. So, I just knew it was a new character, but that was about it.

So, what have you found the most challenging about this role in particular? Is there anything that stands out?

You know, I would say, challenging things to me are kind of actor things, like, the challenge, for me, I guess, was I didn't want to play a villain and sort of make it cliché stereotypical. It's a challenge to try to play a role like this and to make it fresh and to do something new with it, and, you know, something people haven't seen. Depending on what's written for you, there's always that kind of danger. So, I wanted to make it something new, an original character, and that can be challenging.

I did want to ask you about working with the walkers. First of all, he calls them “posters,” is that supposed to be short for “composters?” Because I don't think they actually said what it meant.

I just was curious. 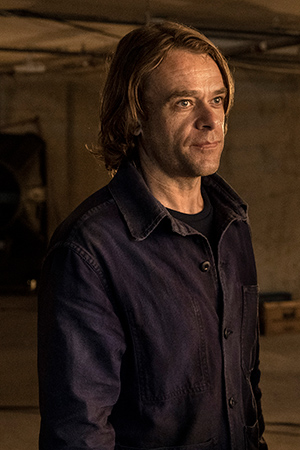 Okay, that was just kind of my own curiosity and not relevant, but, I mean, you got to be around those kinds of effects, and especially that one walker in the tree was really cool, but, does it gross you out at all? Or is it just cool to be around?

You know, they do kind of gross me out, I'll be honest. I don’t know; I think they're pretty nasty. You know, a lot of times you see a group of them on set, and I didn't like to hang out too much around them, because they kind of grossed me out. [I’ve got] a sensitive stomach or something. I don't know. A lot of that gore, it's hard for me to watch. It’s not my go to genre, actually.

I know though the actors have been talking about watching them walk around in masks, and it can be funny, but other than that -

Yeah, it can be, actually, for sure.

Is there anything at all, like, generalized, that you're allowed to tease about what's coming up, just kind of like a little, “watch it next week” type of thing?

Well, I can just tell you that the show goes really unexpected places. Episode 612 is probably unlike any episode that I know of. I mean, speaking of original content, it's very, very unique and very, very surprising. So, all I can say is just keep watching, and be prepared for the show to go places that you haven't seen before.
Twitter
BotonSocial por: SocialEmpresa
Category: Interviews