Tonight, an all-new episode of Prodigal Son aired on FOX. The series follows Malcolm Bright (Tom Payne), a criminal profiler who works at the NYPD. His father, a serial killer (Michael Sheen), sometimes helps him from prison with the more difficult cases.

In this week’s episode, the case hits close to home for the medical examiner, Edrisa, played by Keiko Agena, when a member of her internet sleuthing group is found murdered.

Yesterday, Agena talked to SciFi Vision in an exclusive interview about working on the series, Edrisa’s love life, and more. 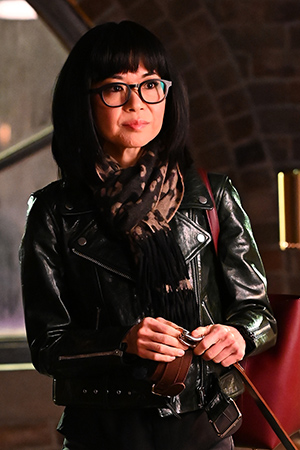 SCIFI VISION:   I remember hearing you mention at the TCAs that there were some things you had told the writers that you would like to see incorporated into your character that they ended up sticking in. I think it was about this week's episode. Can you talk a bit about that and what it was you talked about that they used?

KEIKO AGENA:   That’s a good question. I mean, we have had conversations about Edrisa’s parents. I know we just mention it so briefly in this episode that's coming up, but I think that the flavor of that, and, certainly, I think, when I was acting it, thinking about conversations that I've had with them about who I think [her] parents are, came through in that. I don't know if that exactly answers your question, but I think a little bit of that.

I think there have been, even from the pilot, these little snippets of Edrisa, you know, knowing about Japanese bondage leather, and so there is some of that that has kind of gleefully come out in [tonight]'s episode, too. So, maybe those are a little bit of conversations.

I think, in general, it's just the fact that we have talked about her in a whole way is just part of why we are able to have an episode like [tonight] where it's just a little fuller, where you get to see more than just her in the medical examiner room.

You just mentioned something I want to ask about, and I don’t think they actually mentioned it in the show, but I was just curious, she's seen so many of these things growing up that she mentioned, what did her parents do for jobs? Do you know, or has it just not been said?

It hasn't been solidified. I mean, I know I have ideas in my mind of what they've done and where they are, but I think that we can surmise that she was probably alone a lot. I think that she didn't have a traditional childhood in that she went to a traditional school. For a lot of it, I think there was a lot of traveling. I don't think that her parents were maybe protective of what she was [laughs] introduced to as far as topics. Definitely, seeing a cadaver at seven, that's a little bit early, things like that. So, I think her childhood is definitely unique.

Can you talk a bit about her having this sleuthing group and how she's able to connect to some people, these online friends, and kind of what that means to her? Then also, do you think that she's purposely hidden it? Or do you think it's just never come up? Because they seem surprised when they find it out.

Yeah, I think that, for Edrisa, getting to connect with people in this sleuthing group has been really important to her. I think she's really connected with people who are as obsessed with solving crimes as she is. She has kept this secret from the other people at Major Crimes, because, I think, she was probably a little bit afraid that they would tease her; it seems a little junior league. I think that's the fun dynamic that even kind of comes out a little bit in the episode itself in what I think is a funny way. I think that she's comfortable with them, and I think, for Edrisa, she'd love to be that comfortable with the people at Major Crimes, but I think that that's a journey that's an interesting one to watch unfold.

I assume that she probably never expected to meet any of these people in real life either.

That makes a difference.

In [tonight]’s episode, Edrisa gets a little romance. Is that going to be something maybe we'll continue to see or is this just like a one-episode thing?

Yes, so Edrisa gets to meet Blaze (Michael Luwoye) in person, which is someone that she's gotten to know over a course of many weeks, and months, perhaps, in her web sleuthing group, and it is not something that she expected to do. He is not the person that she expected to see, physically. She thought that his super-hot picture was a sock puppet, but she's pleasantly surprised that, no, that's exactly what he looks like, and she's comfortable with him, and she has chemistry with him.

So, that leads, inevitably, to a a rather interesting date that, besides the severed head and life-threatening situation, was a fun date where a lot of fun things happened. I hope that we get to have Michael Luwoye back at some other time, because, I think, that, for Edrisa, it's really nice to have somebody who really likes her and thinks she's awesome. I think we all like that. 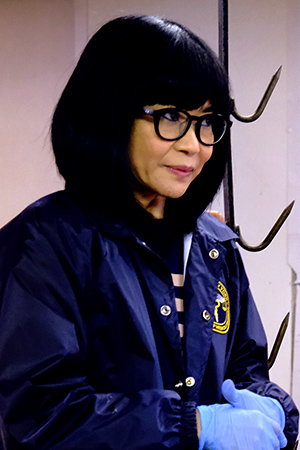 Can you talk about how important you think it was for her to be included in the case more? I mean, granted, she included herself somewhat… [laughs]

…but, obviously, they listened to her and kind of let her be a part of it and didn’t stop her. What does that mean to her?

Edrisa really wants to be a part of Major Crimes in a way that is more than just as a medical examiner. I think she really wants to connect with them in all sorts of ways. So, to be able to be a part of the group, the gang, is very important to her. I think she feels accepted, and the fact that she was able to to contribute to the capture of the killer does make her feel proud of herself, I think. That's a different thing that we're starting to find with her that's changing. I think that she's probably a little different by the end of the episode than she was at the beginning.

So, you think she likes going out in the field?

Oh, she loves it.

Oh, I hope so. I think last season there was an episode where she went to the funeral directors’ convention, and she got to go with [Bright] out in the field, and that was super exciting. So, I think this season, we got to do this, and, hopefully, next season, we'll get to do something else equally as strange and odd and fun. That'd be lovely.

Can you talk about your sort of stunt in the episode when she stabbed the guy? Was that fun for you to get to do that?

Oh, you know, that was a really challenging night, actually, and it's not because of the stunt in any way, with the knife, and that timing and all of that. It was that it was extremely cold, and it was at night. So, we were dealing with that, but there were also trains that were going. They aren't always in the background of the shot, but we couldn't hear each other very well. [laughs] So, a lot of times, we were kind of yelling at each other…It was just very challenging in that situation to to do that scene. I still love it, but I when I see that scene, I remember that was a really tough night.

Now when I see it again, I'm going to be thinking about the train in the background. [laughs]

So, knowing kind of how Edrisa is and learning a bit a bit more about her background, I'm curious, and this is obviously just your opinion playing her, but how do you think she would react if Malcolm were to tell her about Endicott (Dermot Mulroney)? Because I feel like if there was anyone he could tell, she would be the one that would maybe understand and maybe not turn him in. Maybe she would have helped him hide the body. [laughs] I don't know.

Yeah, it's interesting, because my understanding of who Edrisa is, is influenced by every script that I get. So, the way I think about her now is different than I thought about her at the pilot stage, but by now, I think, yes, I think she would be accepting of it. I think she would understand why it was done. I don't think that she is law abiding for the sake of laws. I think she is law abiding for what the laws are intended to do. So, I think there's a lot of gray area for Edrisa, and we all know that Edrisa very much respects and is in love with Bright. So, I think that's gonna affect [her] decisions a lot.

We talked last season a bit about the effects, although, at that point, I had only seen, I think, three episodes. That was way back at the beginning of last season. Obviously, you're around all the bodies and everything. Is there any body or effect or anything that's ever actually grossed you out, or because you're there, does it not faze you?

It's less disturbing when you're there, but the one that really was so kind of upsetting was when I was in the church, and the body was hanging from the ceiling. It just seemed so real to me. It just looked really real. [laughs] So, that one, I think, was the most upsetting one, and the hand in the box was pretty [real]. It's amazing what they can do. It's so detailed, but that was a pretty real looking hand.

So, I'm not sure exactly when you filmed everything, but has COVID like affected much of what you've had to do this season? I know last year you had some episodes that got skipped. I didn't realize at first it was because of COVID, until I talked to Frank the other day. But did it affect this season and the day-to-day filming too? 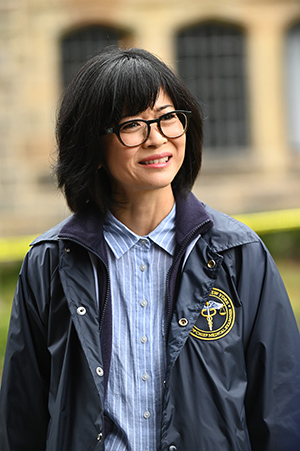 Oh, yeah, because we had to end production two episodes early. So yes, it's technically because of COVID last year that we lost those two episodes.

This season, it's interesting; it is much more challenging. The production staff have to jump through a lot of hoops to make sure that everyone is tested and everyone is safe, and we have masks, and we're distancing and all of that.

But, you know, an interesting thing that has happened is that because they can't write sort of bigger scenes, there are a lot more two, three person scenes…You can actually see it in the whole season, but you can really see it in the episode that’s coming up. You have these duos, these scenes where it's just two people being able to have an intimate scene, which, I think, in a way is maybe a blessing of being forced to film in this way, where the writers are really writing these wonderful two person scenes, which as an actor, is kind of a dream.

Is there anything that you can tease about what’s coming up after this episode? It can be either for Edrisa or just in general.