The comedy series Young Rock, which is based on the life of professional wrestler and actor, Dwayne “The Rock” Johnson, follows him as he takes part in interviews while running for president in 2032. Each interview leads to a flash back episode of him growing up as a ten-year-old, a high school student, and a college student.

Joseph Lee Anderson plays the part of Dwayne’s father and professional wrestler, Rocky Johnson. Matthew Willig plays the role of wrestler André the Giant, who was always around Dwayne growing up.

Anderson and Willig recently talked to the press during a junket promoting the series about their preparation for their roles, using improvisation, and more.

Be sure to watch our part of the video interview below.

The actors talked to SciFi Vision about the preparationthat they needed for playing real people. Anderson said, “Prep wise, the look was a big thing. I gained about thirty pounds lifting, wanting to look as muscular and big as possible. I was watching a lot of his matches on YouTube. I got to have some really, really good talks with Dwayne, just trying to get whatever I could get my hands on as far as Rocky Johnson. Then, I had to remember that it's a comedy and to bring some of my own funny to it.”

Willig told the site, “[Gaining weight] was kind of the three-month sort of plan. In the meantime, it was getting his voice down and getting his mannerisms as far as his speech, which is not easy to do. So, I started with a dialect coach, a French dialect coach, and sort of got a lot of [ways] that you would say English words in French. So, that was kind of a thing for a while. 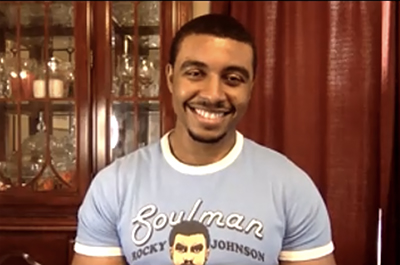 “Then, I needed to, what I like to [call], ‘mumble it down.’ I had to kind of talk like I had marbles in my mouth. So, that was a whole thing that I had to really work hard on. In real life, he could get away with saying something and walking away and people going, ‘What did he say?’ but, obviously, it's a TV show, so you have to make it clear enough that people can understand you but yet sort of keep it in that sort of André speak. So, that was tough; that was a tough thing.

“I watched every interview he did, because that's his real speak, and so I did that a lot and consistently did that. That was tough, but, again, it was kind of the the anchor for sort of having the look and the voice.”

Besides gaining weight, the actors also had to train to get into shape for the series. Anderson told the press, “I had about two months to get to 250 pounds. So, I put on about thirty pounds, just constantly in the gym. I was eating about five thousand calories a day. It was wild.”

Willig said, “I’d like to say I started about twenty years ago when I started being an athlete, a professional athlete, but for André’s look, I wanted to kind of give him sort of that big look. I knew I couldn't - you know, I'm 6’8’’; I couldn't be seven foot tall, but I kind of wanted to have the dimension. So, it was really important for me to have that look, and just like Joe, I gained about thirty-five pounds, but it was bad weight. For a couple months, I ate whatever I wanted and ate late at night. I just needed to have a gut, which I'm not used to carrying around. So, that was interesting to me at my age, I'll say, you know, being a fifty year old, trying to gain thirty five pounds…I think it really gave me a good look as we kind of went along.”

Anderson told journalists that as he got ready for the role, there was a lot he was surprised to find out about The Rock. “The fact that he grew up poor most of his life, I wouldn't have expected that. I didn't know he wanted to pursue an NFL career. I didn't know that he used to steal everything he would see. [laughs] So, it's a lot. I think most people are surprised by so much, because all we know is the mega movie star.”

Willig was surprised to learn about the relationship between André and a young Dwayne. “I think it was just a revelation to hear the actual relationship that André had with with little Dwayne; I wasn't aware of that. So, that was a whole thing. That was kind of my first question to Dwayne, ‘What was the real relationship like?’ He was very eloquent in explaining how he was like uncle André; he was a guy that was always around. He had a really cool relationship with him. So, that was really nice. It kind of elevated my character right away, just knowing that that was real.” 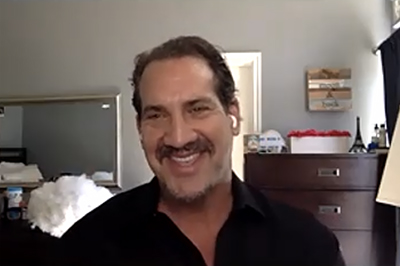 The actors also talked about following the script yet sometimes using improvisation to add things. Anderson said, “With comedy, I know it's a big rule of thumb to stay as close to the words as possible. These writers spend so much time going over these words and going over these jokes that that's [what] they want it say, but we are playing real people. There were times when I was talking to Dwayne, I was like, ‘What's something your dad would always say?’ or, ‘What's something that he would always do?’ And he would say, ‘Oh, he would say this a lot.’ Then, I would go back to Jeff (Walker). I was like, ‘Hey, I don't know if you guys know this, but Rocky would say this.’ ‘Oh, yeah, we'll add that.’ So, there was a lot of freedom that I was given to do that, but I try to respect my writers as well.”

Willig added, “It's a tricky part, because he's no longer with us, just like Rocky, but there is a great communication that you have to have. Like Joe said, ‘the writing is so important.’ You don't want to step on toes, but at the same time, both Natchk (Nahnatchka Khan) and Jeff Walker gave me, as André, the ability to sort of come to them at any point and say, ‘Hey, André might do this,’ or, ‘André might say that,’ or, you know, just even incorporating [things]. He used to say, ‘Boss’ to everybody, which was something that wasn't on the page, but as we went along and sort of did more research, [we] found out that he used to call everyone ‘Boss.’ So, that was something that I was able to incorporate, just little things like that, that made it more authentic. It was cool. And, again, having a relationship with a director that you can sort of go, ‘Can I try this?’ or ‘Is it okay to incorporate that sort of feel’ that's huge. That's something you don't get every day when you're on a set. So, that's nice to have, especially for first a year.”
Twitter
BotonSocial por: SocialEmpresa
Category: Interviews

Doctor Who: The Edge of Reality is a Fun & Creepy Treat for Fans
Wednesday, 20 October 2021