Yesterday, Harts talked to SciFi Vision in an exclusive interview about his work this season on Prodigal Son, his character dealing with racial profiling, the possibility of directing, and more.

SCI-FI VISION:   We talked a bit about this last time, but, obviously, last season, JT was much more distrustful of Malcolm, and I feel like now, they're definitely becoming friends, and he doesn't feel quite, I would say, the way he did. Can you just kind of talk about how their friendship is evolving? And also do you think he notices that Bright's been hiding things? 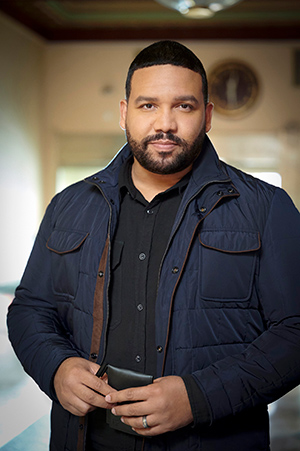 FRANK HARTS:  You know, I think that you're right. JT has grown to appreciate what Malcolm Bright has to offer the team over the period that he's been there. I think this season, with everything going on at home with JT his wife, with the baby, and also on the job with the profiling issue that happened early on, they haven't had a ton of time to really connect. And with COVID and everything, they haven't had a lot of time to sort of be in the same zone like they they had during season one, but during the time that they are together, I think that JT has clearly grown to appreciate a fellow soldier in the trenches, doing the job that he's there to do and doing it well. It's not about personalities anymore. It's about saving lives and making a major contribution. I think he really does appreciate that with Malcolm.

This season JT got to kind of take over a bit for Gil, you know, while he wasn't able to do it, what do you think that meant to JT? And do you think it's changed his perspective on his job at all?

Yeah, I mean, I think that it was probably one of the most exciting and also surreal things that ever happened to him all at once, because here you have a young black man being promoted to the highest position in major crimes for a temporary period, entrusted with this responsibility. At the same time, he's being shaken down in an alley. So, I think it opened his eyes in a number of ways, or, I should say, opened them even wider to the fact that he can, if given the opportunity to do this job, be the head of the division, just as well, if not better than anyone else.

At the same time, it opened his eyes to the realities of daily life on the ground as just a black man walking through the streets of America, you know, as we saw in Virginia, just a short while ago when a young soldier, a Lieutenant, was being harassed in a gas station parking lot and maced and for simply complying. He's an active duty soldier. It was just mind boggling to see.

So, those kinds of real world parallels really excite me about playing this character, but also, at the same time, it can be scary to approach as a human being, but also as an actor.

I know you've probably been asked about it a lot, but, obviously, like you said a bit ago, JT deals with racial profiling. From what I understand the writers kind of consulted you before you did all the scenes, and you guys had a discussion of how you wanted that to play out. Can you just kind of talk about that overall, and did you did it work the way you wanted? Were you happy with it in the end? Because, I think it worked really well.

Yeah, we definitely had the conversations last summer after George Floyd, but just in the end, of course, creatively, I don't have a lot of say in the way those things go, but the creators were at least very good about listening to my thoughts and prayers and ideas and hopes regarding JT as a black cop in the world, and in a [world] post George Floyd and Brianna Taylor and all the rest. So, I didn't know exactly how it was all going to go down, but I was happy with the leap that they took off the cliff, because it wasn't an easy task, especially when you're dealing with a show that's about so many different things. It's Whitly family focused, and then, you sort of have this rush of major real world events that happen that you have to deal with, and only thirteen episodes to do it. So, I really appreciated the way they kicked it off.

I think it's hard to solve every problem on on television, and say, solve racism on television, in just a few episodes, but I think they gave it definitely a valiant effort. I'm happy with the progress that we've made and the connection that we made.

I mentioned this to Chris [Fedak] and Sam [Sklaver] as well; I’m excited to see, as we move forward, showing sort of the other side of JT’s life that was affected. This bad thing happened to him, and now I'm interested to see how he really picks himself up and moves forward and lives a full three dimensional life in spite of them, regardless of what happened to him, and I think that's coming.

Well, I guess, you partially answered what I was going to ask. I was going to ask, "Is he still going to be dealing with it?" Does it affect his work anymore? Or since everybody, at least in his group, is supportive, is that enough for him? 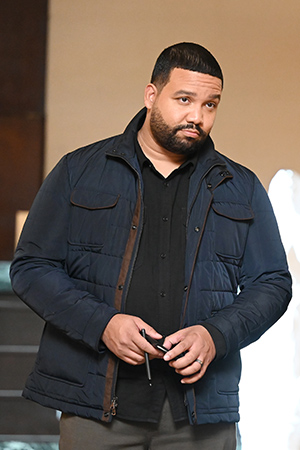 I think that he's definitely able to do his job without any issues at this point. But, of course, you're always going to have certain elements in the department, at large, who are still playing games and trying to give him a hard time, but I think it's wearing thin at this point, especially because he does do such a great job. It's hard to deny him in a way, and it's becoming easier and easier to appreciate him more for what he does as a police officer, as opposed to this incident that happened in an alley. That wasn't his fault at all. So, I think he's definitely able to do his job so far.

Some weird things from time to time, they happen, you know, notes left on your locker, or inside your locker, or things like that, but I think they're few and far between, and they're becoming less and less and less. As a military guy, it takes a lot to shake him. This was a weird thing, definitely a crazy thing that happened, but he's able to rise above, I think, and survive this.

I don't think that's going to happen this season, but, hopefully, moving forward I'm sure that it'll absolutely happen. As a matter of fact, Chris and Sam [and I] have had that conversation, and they're excited to explore all the dimensions of JT and his personal life, especially when we move into season three, keeping fingers crossed. They're always thinking about all of the characters on the show and all the ways that they can give those characters as many dimensions as possible, and really, more importantly, to give the audience what they desire, which is a closer look into what makes these characters tick.

It's always fun to see what the Whitly family's up to, and it's also exciting to go to the other side of the river, so to speak, and see what the NYPD families are up to, whether it's Dani, Gil, JT, or Edrisa (Keiko Agena).

When I talked to Aurora at the end of last season, the one thing she told me, which I didn't even realize, but, I guess, some of the episodes got taken off the schedule, and before the finale, they had moved around some things. I'm just curious, when they do something like that, did they add what was planned back? Did they start new stories? Or did they just kind of mash them together? Or do you not know; you may not even have an answer to that, but I'm just curious.

You know, it's a great question. I mean, we definitely lost some things. I'll put it this way to you. I said, we lost some things, but in the end, not really, because they always seem to find a way [back around], especially with even more limited resources, when you are losing time and actors and things like that to COVID. they're able to hit the story points somehow, some way. At some point, it all comes back around.

So, I think it may not have been as easy to swallow as it would have been if we had a nice smooth ride for the season, but in the end we got done what we needed to get done and may have lost a few small things here or there, but in the end, the major story points, they get back to them.

Actually, this season, I was fortunate enough to be able to shadow direct for a few episodes and sort of see how the sausage is made from the other side of the camera, and it is just amazing to see all of those plates spinning in the air. It gives you a different appreciation for the work that, not just has to be done in general, but, especially, during the time of COVID when life is even more difficult as a showrunner. So, that really helped me appreciate a lot more of what happens and how it happens.

Is that something you're interested in? Do you want to try to direct an episode, or did you just kind of want to see how it works? 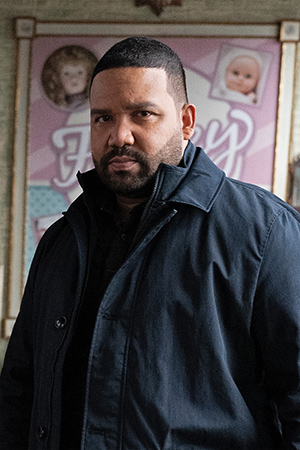 I mean, I'm 100% interested in it. So, while I train myself and then build up my skill level on the other side of the camera, I just sometimes like to just get that real world experience as well, on the other side, because even though I'm always on set as an actor, and I know a lot about how to make television, there's nothing like literally going on the other side of the camera and just focusing on that. Also, even just leaving the set and going out to see what it's like to scout locations and deal with costumes and hair and makeup, tone meetings, it excites me. I want to definitely be one of those folks who is able to contribute in a real way behind the camera, and not just necessarily as an artist, but I'm definitely excited to contribute my name to the list of available black directors as well, because we need more.

Definitely, and when you do that, you'll have to come talk to me again after that.

So, is there anything that you are allowed to tease? I know you're not in necessarily this next episode a whole lot, but maybe in general, something about JT that you can kind of put out there?

You know, that hasn't happened yet, and I'm not sure that it will happen this season, but again, that's one of those things to definitely look forward to when it happens. I think it would be some great television when JT and Catherine meet up on screen, but we'll see how it all shakes down in the end. Fingers crossed.
Twitter
BotonSocial por: SocialEmpresa
Category: Interviews