NBC’s hit series, Zoey’s Extraordinary Playlist, returns Sunday with all-new episodes. The musical comedy-drama follows software engineer Zoey Clarke (Jane Levy) who last season discovered she had the unique ability to hear what people are thinking as songs. During the episodes the cast will suddenly break into song and choreographed dance numbers.Andrew Leeds plays the part of Zoey’s older brother, David. Alice Lee plays his wife, who recently gave birth to their child.

Earlier in the week, Leeds and Lee talked to journalists during a junket and teased a bit of what’s to come for their characters.

In the upcoming episode of the series, David joins a band with Zoey’s neighbor, which is really important to the character. Lee told SciFi Vision that Emily supports him. “Emily obviously supports his decision to not work, and she actually digs it, I think. I think she's a little groupie, and she thinks it's hot that her husband's in a band…It’s kind of a funny twist.” 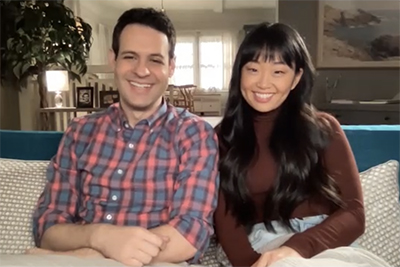 Leeds added that David may be a bit too old for it and hinted that it may not work out. “Something happens in a future episode where it doesn't quite work out the way that David had hoped, unfortunately, because he was really into it. It's like his dream. His dream was to be in a band.”

He also talked to the site about what his favorite song to perform on the series has been. “Honestly, they've all been so so fun it's hard to say a favorite. They've all been favorites for different reasons. “Just Give Me a Reason” was really special. It was just the first time that we were really working together. I love that song; I love what it was about for us. The movement was so interesting. 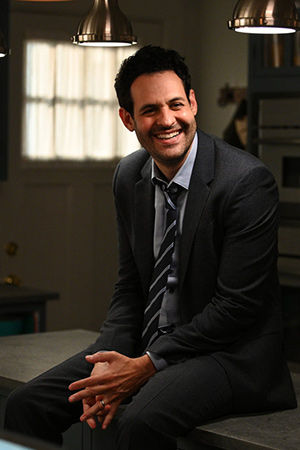 “The thing that’s been so fun is every single time…[is] it's always a different style of movement for the most part. So, you know, doing “I Want to Break Free” in the courtroom was so challenging, for me anyway, [but] that was just really fun.”

The actor wasn’t sure it worked out so well, but Lee assured him it did.

He also talked to the site about singing with Peter Gallagher, who played his character’s father in the first season. “Last year, singing the Billy Joel song, “Give Me My Angel” with Peter was a really special moment for me, just to get to do it and to get to be there with him. Doing it and singing it live, which we don't always get to do, was really special, for a number of reasons. One, because I love that song, and I love Billy Joel, also, because I grew up looking at Peter Gallagher…[He’s] this amazing actor. When I was a kid, I was doing a Broadway show, and he was in the theater next to me doing a Broadway show. So, I was always like, 'Oh my gosh, it's Peter Gallagher.' So, then to find that I was getting to sing with him on camera was pretty, pretty amazing.”

Lee told SciFi Vision she loved performing “Poison.” “That was such a fun song to sing.” She added that there is one coming up later in the season that she also loved.

The two continued that they also have a song they sing together coming up. Leeds said, “We have something coming up together in Episode 10 that was also different, but definitely one of the most special things.” 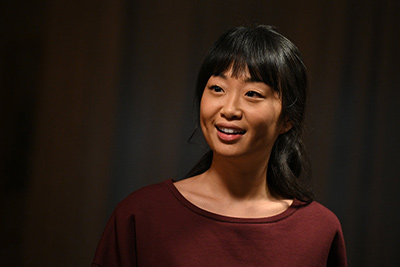 Lee praised his singing in it and added that they couldn’t reveal what song it will be.

Talking about what’s on their personal playlists, Leeds told journalists that although he doesn’t really make playlists, it would feature his costar’s music. “[Alice]’s an amazing songwriter and is actually going to release a new music video this Friday that she that shot while she was up here, and she shot another one up here before, and she's incredible. So, my playlist would be her song, which I do constantly find myself singing.” He added that, otherwise, he listens to musicals and Billy Joel.

Lee said that she does make playlists, and they are usually random songs that she hears and decides she likes. Right now she is listening to “Mood” by 24kGoldn.
Twitter
BotonSocial por: SocialEmpresa
Category: Interviews