Tonight, the newest episode of Resident Alien premiered on Syfy. The comedy series follows an alien (Alan Tudyk), who crash lands on earth and kills Harry Vanderspeigle, who is hired as the interim town doctor after the original is murdered. Taking his place, Harry poses as human until he can find his ship and equipment and destroy the Earth. Along the way, Harry ingratiates himself with the people of the small town in Patience, Colorado and starts to learn what it’s like to be human.

Corey Reynolds stars as Sheriff Mike Thompson. He is a no-nonsense sheriff, who, along with his deputy, Liv Baker (Elizabeth Bowen), has spent the season trying to find out who killed the original town doctor.

Yesterday, Reynolds talked to journalists during a junket about working on the series, what’s coming for his character, and more.

Reynolds talked to SciFi Vision about a scene from tonight’s episode, where Sheriff Mike came to Deputy Liv during karaoke and sang to her, trying to make up for how horribly he treated her and for not giving her credit for finding the doctor’s murderer.

“Chris [Sheridan] was really good at utilizing our talents, if you have any special abilities, similar with [my] beatboxing. He knew that I have a musical history. He had talked about, early on, wanting to get singing somehow plugged into the season. We didn't know exactly how it was going to go at the time. 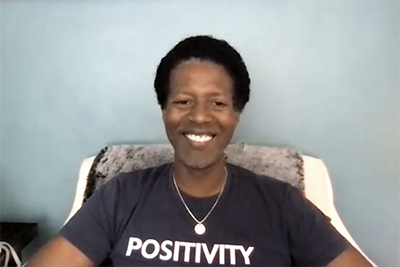 “As the arc of the season between my and Elizabeth Bowen’s character, Deputy Liv, as that took place, he found The 59 and karaoke to be the perfect opportunity to utilize her talents vocally and mine as well. It seemed like a way for Sheriff Mike, who's been anything but humble this season, to acknowledge her value and in the way that he could, at that moment, at least, apologize to her and show her that he understands her value.

“I think in this episode tonight, this is the one where our killer’s arrested, and we see Mike go through this moment of, if I'm remembering the episode correctly, he's walking into the town hall, and everyone's kind of congratulating him, and he's not feeling it, which is odd. That would be like the moment of all moments, I think, for him to be gloating, but there's something missing. He didn't solve it on his own, and quite frankly, he wouldn't have been able to solve it without deputy Liv. I think what happens in this episode is that his desire to mend the fences with Deputy Liv overtakes his desire to be in charge and to be dominant. I think he understands that she's quite valuable.

“I think, ultimately, there's some stuff that, you know, we were always very confident that there was going to be a second season. So, Chris and I have already discussed, long before the end of this season, some stuff that's going to be in next season. So, I think we're gonna come to discover a lot more about why Sheriff Mike is the way he is, and maybe why he was treating her the way that he was.”

The actor, however, confessed that it is hard to be mean to Bowen. “We'd cut sometimes, and I [would be] like, “I am so sorry,” [laughs] because it's just he's so abrupt, and he's an outsider in the in the town as well. Everyone else in the town has been there their whole lives, and he and his father moved there about five, six years ago. So, I felt like, and I think Chris felt like as well, that it was important to, when you're talking about the background of the town, you have to kind of discuss the background of the people who've been there from the start.

“But yeah, there’re some very exciting things coming up for for Mike. We're going to get into his head, which could be scary.”

Reynolds, postulating why he acts as he does, agreed that it’s about time his character stepped up and gave her the credit she deserved. “Outside of Liz being an amazing person and a beautiful human being, Deputy Liv has been on his side as best as she could since the very beginning. I mean, there was at one scene with Max (Judah Prehn), before she did the artist's rendition of the alien, where she says to him, “I know the sheriff seems tough, but he's just a big old teddy bear.” She's been trying for a while, and he just has not been, but I think he's deeply insecure. There's a lot of insecurity going on in Sheriff Mike, and people when they're insecure tend to do ridiculous things.”

The actor later told another journalist, that he thinks a lot of it has to do with his father. “This season's he's been obsessed with this case. This is the biggest thing that's come in to his world in a long time, and he has a father that he feels like he has a lot to prove to. 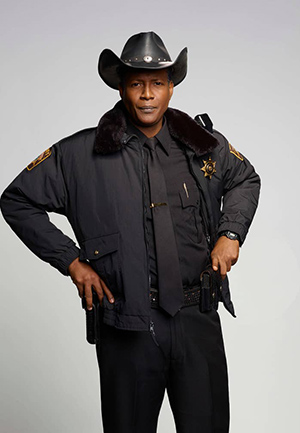 “I think, for Mike in particular, he's fighting being in his father's shadow to a degree, which we're going to explore more, in season two in particular, but his dad is pretty overbearing. When you've had a lifetime of someone saying, 'You're not good enough,' it can create an individual who always feels like they have to prove they're good enough, and I think that's what's going on with with Mike.”

Reynolds also talked to journalists about what he feels has been the most fascinating aspect as he has got to dive into the character. “[It’s] trying to figure out a way to walk the line of being a likable antagonist. Most of the characters that I've played in the past have been fairly likable. Going back to Seaweed on Broadway in Hairspray and Sergeant Gabriel (in The Closer), they've also been very kind of straight laced and by the book. So, it was fun to play someone who doesn't have those parameters to live in, and our creative team is very good about allowing us to improvise and to adlib…What's fun about the show, honestly, is we improvise so much that we don't know what tape they're going to use. So, for us, watching the show is also fun, because it's cool to see what Chris decided to use, to piece together, because it's all so very different in some ways, but it's just been just been a lot of fun. I love Sheriff Mike and his attitude, and it's fun to be the pseudo - I don't want to say bad guy, but not be the good guy, the goody two shoes. It is strange to be in a town with an alien and feel like your character is one of the weirdest.”

The actor added that when stepping out of the confines of those types of characters, he was able to do certain things like drop f bombs, but unfortunately a lot of those were cut. “If you guys see some outtakes of this show, oh my gosh, there is some crazy shit that you guys haven't seen…There is an outtake reel that's going to be unveiled I've seen, and it is fantastic.”

For some fun, Reynolds also commented on which actor on the show would be the most likely to be an alien. “Instinctively, the first person that comes to my mind is Alan, just simply because he's so freaking good as Harry. His choices that he makes - sometimes, as an actor, you watch another actor perform. It's kind of like an athlete. When you feel like, 'Oh, I could do that.' [or] 'Well, I could make that shot,' or 'I can throw that pass,' or whatever, but seeing some of the choices that he's making, they're so unique and unorthodox and perfect for Harry, but probably Levi [Fiehler], maybe Alice [Wetterlund] as well. We're all a little weird.”
Twitter
BotonSocial por: SocialEmpresa
Category: Interviews