Last week's episode of For All Mankind was all about keeping secrets. Dani (Krys Marshall) leveraged her lie into a command position but for now, Molly (Sonya Walger) and Ellen (Jodi Balfour) are keeping up appearances. Worse, both are forced to watch men get away with things the women never could. Ellen is still hiding her sexuality in the hope of getting to Mars while husband Larry (Nate Corddry) enjoys his post-NASA freedom. Meanwhile, Molly takes over as head of the Astronaut Office knowing she can never capitalize on the position the way Ed (Joel Kinnaman) has.

Scifi Vision spoke with stars Baflour and Walger about how their characters are dealing with the consequences of their choices. Watch our video or read the transcript below, and be sure to watch For All Mankind every Friday on Apple TV+.


Zoom Interview
For All Mankind
Jodi Balfour and Sonya Walger 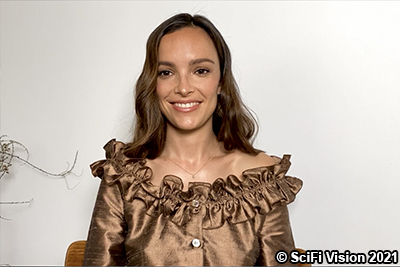 SCIFI VISION:   I wanted to ask you both about the sacrifices that your characters have made. Maybe, Jodi, you could talk a little bit about [how] Ellen gave up the love of her life in favor of her dream, but now, she lives with Larry, and she has to see every single day what it could be like if she if she made a different choice. While they have, I think, a fantastic partnership and a great marriage in some ways, could you talk about what's in store for her in the season as she watches that?

JODI BALFOUR:  Yeah, absolutely. I can talk to a degree about it without walking into spoiler territory, but you're absolutely dead on. There's massive sacrifice she makes at the end of season one, and we see the toll it takes on her. We see the toll it takes on Pam (Meghan Leathers). We see the toll it takes even on Larry as very much more than just a bystander in that threesome relationship, but yes, she's now living with Larry. It's nine years later; they have a wonderful bond and a real partnership. There's a lot of support there, a lot of love even, but absolutely, it's missing something huge, and she is watching Larry navigate that in a very different way to how she does. Larry has sexual partners. Larry has a lot more fun, in the way we understand fun, than Ellen does, and that is painful. But I think at least until a certain point in the season, when something really exciting happens, she doesn't know how to marry these two worlds. She tried, and it broke her heart, and it broke someone else's heart who she cares more about than anyone else in the world, so her way of coping is to compartmentalize and to completely cut that part of herself out until something stops that from being possible any longer.

SCIFI VISION:   Thank you. And Sonya, [what] Molly does in the beginning of season two, I'm not sure if I'd call that a sacrifice as much as it's a risk. I'm not sure if she even really thought it through. Molly, it seems to me, always just acts on instinct, and she's a rule breaker. She's always gotten away with it; she's never really had any consequences for her actions. Can she continue to get away with it in season two? 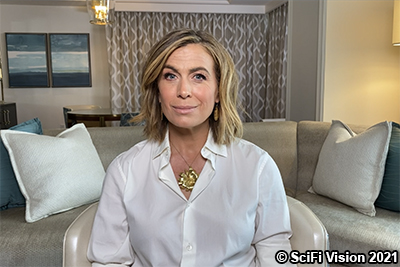 SONYA WALGER:  Well, that's what we're about to find out, I think. Yes, I think Molly's impulsiveness has largely been to her great good fortune and has got her on the moon in the first place. That headstrong, willful, determined, "I will take no chain of command, nothing,” I think that has made her enormously successful as an astronaut, and I think it's going to be the seed of her downfall, potentially.

SCIFI VISION:   Molly also has a fantastic husband (Lenny Jacobson), and we don't maybe see as much of him as we do of some other spouses. It's interesting to me that she seems to have not confided in him or turned to him, or maybe that's coming. Maybe I haven't seen that yet.

SONIA WALGER:   It's an interesting part of it, I think. Molly, for all her outspokenness is actually an enormously private person and quite internal. It's always been fun, and part of the challenge of playing Molly has been how to paint these big, big broad strokes of this outspoken, angry woman and also keep some simmering of what's the internal temperature underneath that; what's the vulnerability in Molly. So, getting to play with Wayne, Lenny Jacobson, the lovely actor who plays my husband, I'm always so relieved when we get those scenes, not only as it's so fun to play with him, but it's always a moment to give Molly an opening and to soften her and to have an insight into what happens when Molly is disarmed, when Molly is not defending her position all the time.
Twitter
BotonSocial por: SocialEmpresa
Category: Interviews