Recently Hulu premiered Into the Dark: Tentacles. In partnership with Blumhouse Television, Into the Dark is a monthly horror anthology made up of feature-length stories. Tentacles follows the couple Tara (Dana Drori) and Sam (Casey Deidrick) as they enter into a sudden and deep intimate relationship that soon changes into something horrific.

Drori, along with writer Alexandra Pechman and director Clara Aranovich, recently talked to SciFi Vision during a junket promoting the series.

Be sure to check out Into the Dark: Tentacles, available now on Hulu. You can also read the full transcript below the video.

SCIFI VISION:   What was the process for creating this story and then turning it into a script for the show? 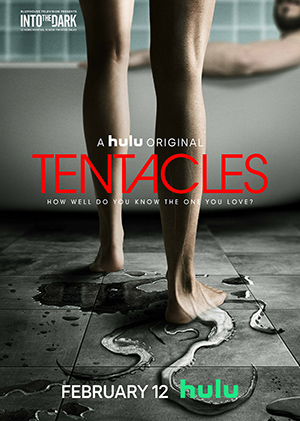 ALEXANDRA PECHMAN:   It started out as a nightmare [laughs] that my partner - we were just starting a relationship - collaborated on the story together. Then, I wrote a script from there. It went through different iterations and then went out as a spec, and then, found its way to Blumhouse, where they do this great Into the Dark series where it fit really well into the holidays specific themes. It went through some more drafts, getting it to a place where we could go shoot it, and then Clara came on board, and it went through more iterations. COVID happened, [laughs] and that led to some creative discussions and changes. And now, you can go and see it.

What was the original nightmare you had? I'm curious about that.

ALEXANDRA PECHMAN:   Something very similar to what happens with Tara happened with me, and instead of my partner thinking that it should make him run in the other direction, he was like, “That's a cool horror movie idea.”

Clara, when you directed this story, were there any special challenges that you had to overcome?

CLARA ARANOVICH:   Oh, sure. I mean, as Ali mentioned, COVID threw us a bit of a curveball, and what that required of us was kind of re-conceiving some of the intimacy scenes. Obviously, there were a lot of actors being in close proximity to one another that we had to re-conceive, or just make sure it was really earned. So, there was that side of it, and also that impacted how we might want to conceive of or execute any fight scenes.

But more than anything, it altered how we were going to render the titular appendage. I don't want to offer any spoilers, but what I will say, is originally there was not intended to be any CG. Everything was intended to be done practically. We actually fitted Dana for a silicone body rig, which we did end up using…We basically transition some things from practical special effects to post production, visual effects.

Then, aside from that, there was just the challenge of making a film under Blumhouse’s kind of famous constraints of like, “How quickly can you do this at a level of quality that feels like you can carry the name of the of the production company?” We were gifted with a very skilled crew, and I'm pretty proud of what we were able to accomplish.

Did either of you get any particular ideas besides what you mentioned or directions from the producers about how to do the episode, or do they pretty much let you do what you want?

CLARA ARANOVICH:   Well, they were involved in giving notes. They know what they're doing, and Ali talked to that process, but as far as like how we wanted to realize it, they gave me a really long leash, because one of the things that's beautiful about the Into the Dark anthology, is how absolutely varied each episode is from the one before it. Each one is very filmmaker focused and voicey, so that was very cool.

But, I'm also curious to hear [from] Ali what it was like developing with Blumhouse.

ALEXANDRA PECHMAN:   Yeah, I mean, I think, especially given that the Into the Dark series is so focused on particular holidays and particular themes driving each episode, it was about really paring down and focusing on what the central idea of this story is, which is the relationship and losing yourself in another person, and just really streamlining things so that it's a snappy [paced] Into the Dark episode.

Dana, was it difficult to play both a woman and a monster at the same time?

DANA DRORI:   Absolutely not. It was very easy. [laughs] in every possible way. I don't think that women - and not that you were putting these words in my mouth at any way, but I don't think that women are two dimensional characters. I think that there's a full 360 view of women as - well, I was going to say as humans, but I guess she's not a human in this film. But no, I thought that was the most exciting part of the film, actually. One of the reasons I was so drawn to the role, was that I was able to play a woman who is not easily put in, you know, a spoon fed constraint that we're so used to. So, I had a lot of fun with that, actually.

Good. And I wanted to ask you; I hope it’s not a delicate question, but did you and Casey feel comfortable with each other before you had to do all those sex scenes?

DANA DRORI:   Yeah. This is my favorite subject to talk about, actually. Clara did an incredible job in a multistep process of making sure that we were comfortable with each other, making sure that everything was well communicated and aboveboard, making sure that we had a really wonderful intimacy coordinator who worked with us to get everything out in terms of our boundaries, but also our desires and what we'd wanted to do on camera. I can only speak for myself right now, but I think that goes for both myself and Casey, that we both felt very comfortable and excited to do all the intimacy scenes. It was such a wonderful experience. I only have positive things to say about it.

DANA DRORI:   I hadn't in film, necessarily, but I worked for a decade as a model, and I had had pretty harrowing experiences in the modeling industry, that coming to this project and having agency and a voice for my own body and for my own subjectivity in those roles was so refreshing. I was so moved by that, and I was so thankful to Clara and to our intimacy coordinator, Corrin [Evans], for being such advocates on my behalf throughout the entire process. I felt like it was a completely different experience from my former experiences from my previous job.

I wonder if it makes a big difference working for women more than for men who are in charge. 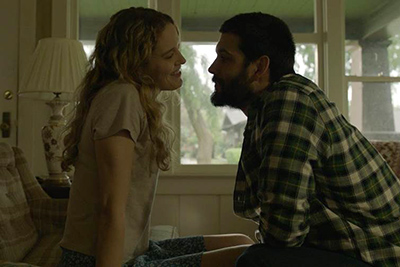 DANA DRORI:   Yeah, I mean, I loved that we had a female writer and a female director. I can't speak to another experience of it, but I've worked with a lot of male photographers who were total jerks. That would actually be a really interesting question for Casey, who I'm sure has worked with multiple directors. I wonder what his experience was, but I can't speak to that. But not only in terms of the the coordination of the intimacy scenes, but also the subjectivity of Tara's character as, you know, someone who loves sex, someone who is not necessarily just the object of it. She's really much the subject of a lot of those sexual experiences, and the the sex scenes were not just like hetero P and V sex. They were very intimate and very sensual, and the first one was just for Tara's pleasure. I am very proud to have collaborated with Clara and Corrin and Ali on those on those scenes with that subjectivity.

I'm actually interviewing Casey on Monday, but I know he was on Days of Our Lives for a long time, so I'm sure he was comfortable with the sex scenes. But are there any other questions you can think of that I should ask him? Anything particular that you think would be interesting for me to ask Casey on Monday?

CLARA ARANOVICH:   I’d like for him to talk about how he works with - and Dana, tell me if you feel differently, but they're both extremely skilled, but he, I think, really brought life with - again, I'm not sure about the spoilers, but watching him work with the CG aspects like aspects that weren't there, he's very embodied. His process is very intense. That's what I'd be keen to hear about. I don't know if you feel differently, Dana, having been on set with him.

DANA DRORI:   No, I think that's a great question. I mean, Casey has a specific type of focus that I hadn't seen in other actors. He's very, very, very good at at creating an image that is really believable, even when it's with these sort of practical stand-ins. So physically, he's just very capable of that. Yeah, I'd be very curious to hear what his process is for that too and if he'd be willing to speak on it even.
Twitter
BotonSocial por: SocialEmpresa
Category: Interviews