Actress Aurora Perrineau, who plays the role of Detective Dani Powell on the series, recently spoke in an exclusive interview with SciFi Vision about her work on the show, what she’d like to see for Dani, and more.

SCIFI VISION: How did you first get involved in the show? 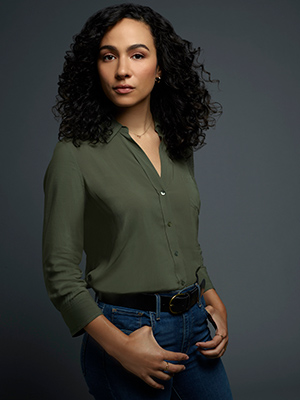 AURORA PERRINEAU: I got sent the script, went to an audition for the character, kept auditioning, and then eventually got it.

I ask everybody this; is there anywhere other than the script you took inspiration from when you were creating your character? You know, anybody you thought about or anything like that?

Yeah, I actually know a female detective in real life, and so through the auditions - it didn't end up happening for the actual show, but during the auditioning process, I dressed like her, and my mannerisms are similar to her, the cadence in which I speak is similar to her as well. So, I kind of just based my whole thing off of her.

So, other than then talking to her, was there any other special preparation or maybe research into things, law enforcement or otherwise, that you did for the show?

Not so much. I rewatched The Killing, which was a show that I loved before. I’d already watched Law and Order and stuff like that before as well. I felt like I’d kind of already been involved a little bit with the criminal justice system for a show that I'd done before called When They See Us. So, I’d already been a little bit more familiar with how certain things work and, you know, detectives and all of that stuff, because I’d done research for that show. So, I felt prepared.

That helps, I'm sure. Maybe this stuff you did before too, but did you do any weapons training, stunt training, or fighting? Any of that kind of thing? Specifically, a lot of people were mentioning the fight in episode 118; that's a really good fight.

As far as the stunt stuff, I've done a lot of stunts before. So, we kind of worked that fight out the day before with our stunt coordinator and our stunt doubles to figure out how much of it I could do or couldn't do and how much I was allowed to do with our guest star, Dag. We just did it the day before. It was super fun; I love getting to do physical work, so it's good. 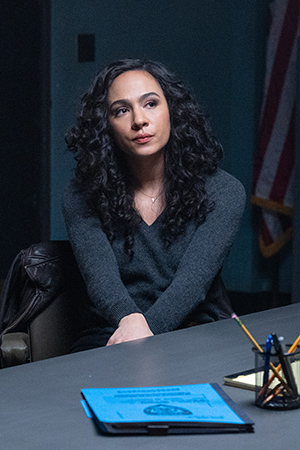 Is there anything you can think of that you specifically would like to see for Dani for season two?

Yeah, I think for Dani, I would really like to go more into what happened with her father and where she's from in the Bronx and maybe see more of her home life to understand why she is the way she is. I know a lot of times people have questions. I saw some questions yesterday about why Dani flinches when Malcolm is throwing the papers and the certain reactions that she has to things. So, I'd like to see more fleshed out reasoning for why, as opposed to having so many questions, about why she does the things she does. I guess, a better understanding of what makes her, her.

That kind of leads me to the other thing I was going to ask, specifically about her reactions, is how do you think it affected Dani the way that she saw Malcolm in the last episode attack Eddie (Matthew Lawler) and pull him off of his father? Like he gouged him in the eyes and all that. And also, do you think that she thinks that he could have killed him?

I think Dani's a professional, so even though she has, you know, deep love for Malcolm as a person, she really does have to look at the evidence and consider that there is a possibility that he is guilty of this. It doesn't probably help with all these other behaviors to make him seem like he doesn't have the capability to do those things. I think, you know, the thing with the gouging of eyeballs and all that stuff, she was undercover and all, so she's seen these kinds of things. I still think it's a traumatic thing to go through and watch someone that you care for have to go through with their dad.

Right, right. Just out of curiosity, and there probably are people online who think the same thing, but I thought about it when I was watching you earlier in the season, could you ever see Dani in a romantic relationship with Malcolm?

You know, I mean, I guess anything can happen, but it's one of those things that I feel like a lot of times when people have chemistry, we always assume that chemistry means a romantic relationship. But I really think there's romantic chemistry, and then there's friend chemistry. A lot of friend chemistry can be confused with romantic. Or it could be [romantic]. You know, it can go either way, for sure, but I think when you're close to someone, sometimes people feel that way.

I know I have a male friend in real life who, I guess for the longest time, everyone thought I was dating, and I was so confused. I was like, "What do you mean?" They were like, "Oh, well your chemistry when you're together..." I was like, "Oh, yeah, he's just my best friend. There's no relationship going on there."

Right, right. No, I just - I don't know. Early on in the show, I thought she'd be really good for him. [laughs] 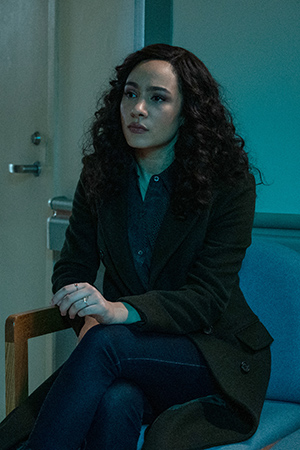 [laughs] I think they definitely get along really well.

So, is there another character you’d like Dani to have more scenes with, or another actor, because you want to work with them more?

I mean, I'd love to just work with everyone all the time, because everybody's so great. I'd love to work with Keiko [Agena] more, just because, I mean, we have such a good relationship outside of work, and I don't get to see her often, because I'm on set and she's not on set as often. And I think her character (Edrisa) is so fun and quirky and cool, and she does such an amazing job, that I'd love to see kind of her relationship with Dani build more, because I think it's like an odd couple, which would be, you know, really fun to play with.

Maybe they've told you this in backstory, but what do you think her relationship was like with Gil (Lou Diamond Phillips) that's made them close?

I think it's kind of similar to the thing with Malcolm, where, you know, Malcolm kind of saw him as a father figure, and Dani lost her dad so young as a teenager. I think that we didn't learn it this season, because of the two episodes that we didn't get to film, but actually, you find out that my dad was in law enforcement. So, I think that Gil is like the next best thing to her dad, and she clearly idolized her dad, and she idolizes Gil, and he kind of becomes her father figure as well.

You just said something I didn't realize. Somebody had said next week was the finale, and I thought, no, it's not. So, what happened? Are you just not doing the last two, or did you make an ending to the season? I'm not sure what happened.

Next week is the finale. So, we shoot out of order, because one of our actors has a really busy schedule; so, we have to shoot kind of around that actor. So, we shot [two episodes,] and there are two episodes that are missing, but we definitely have the finale that we shot, which will be this coming week. And that will actually tie the whole season up…So, it should all be pretty cohesive.

Okay, cool. Yeah, that's kind of sucks you didn't get to do the other ones, but at least you got to do the ending. That's the most important thing.

Yes, I'm so glad that we got the finale, definitely. 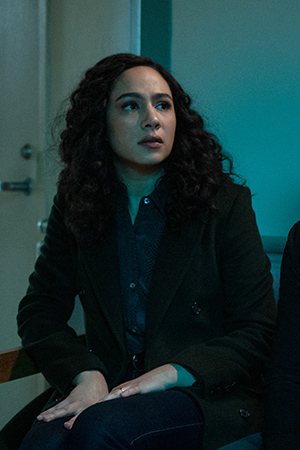 So, how do you feel you are most similar and most different from Dani? How do you connect with her?

I think I connect with her on the sarcasm level. We're definitely very sarcastic. I feel like a lot of people in life think that I'm really serious, and so I guess maybe that's something that also seems similar to Dani, but it’s really not. I'm incredibly goofy and nerdy, so I guess that doesn't feel like Dani to me either. But, you know, I think we're both a little hard headed; we're both sarcastic and believe in what we believe in, but that's kind of where it stops.

So, how do you feel about being a role model for young women who want to get into law enforcement?

I mean, that's great. I didn't know that that was a thing, but if that is a thing, I think that that's wonderful. You always hope that, you know, [as] a woman of color, that you in some way are showing other young girls a good example. So, I would hope that I'm doing that, and that would be wonderful.

Actually, yes. I can't talk about it, because in the next episode, but I can tease that it's between me and Malcolm.

What do you like or dislike most about Dani? Is there anything you can think of? Anything you'd like to change about her, if it was up to you?

So, is there anything that you can tease about next week that you're allowed to without spoiling it?

I just wanted to ask, when I read your last name, I was curious and finally looked it up and found out that yes, your father is Harold Perrineau. I was a big fan of Lost, and I was just kind of curious, with it being such an iconic show, did you watch any of it? 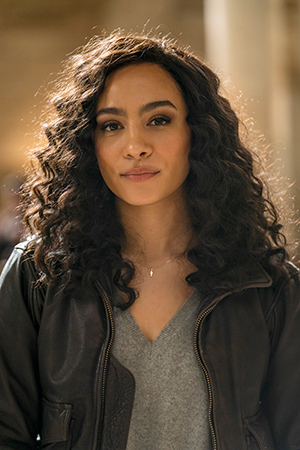 I actually was considering rewatching it during quarantine. I was like, "Maybe I could just binge through all of Lost, because I haven't seen it all the way through."

Well, I definitely recommend that. We did that for our podcast. We did the whole rewatch. It took forever, but it was great.

What else have you been doing while you're in this isolation? Anything fun?

I have a Peke-A-Poo. A little one, Kiki.

Oh yeah, they're loud dogs for sure. They're fun, though.