Syfy Powerful Mondays continue to get better and better with each episode that airs of their newly acquired series Lost Girl. The network has already picked a date, April 16th, to air season two of the series.

The show follows Bo, played by Anna Silk, a succubus who must learn to control her hunger. She is helped by her friend, roommate, and sidekick, Kenzi. While Kenzi doesn't have powers of her own, she has a lot to offer, such as a great sense of humor and a kick-ass wardrobe. She's brave and will do whatever it takes to help Bo.

The spunky character of Kenzi is played by actress Ksenia Solo, who has appeared on television series such as Moonlight, Life Unexpected, and Nikita. She has also appeared on film in movies such as Black Swan.

The actress sat down last week with Jamie Ruby of SciFi Vision for an exclusive interview to talk about life and her work on Lost Girl. 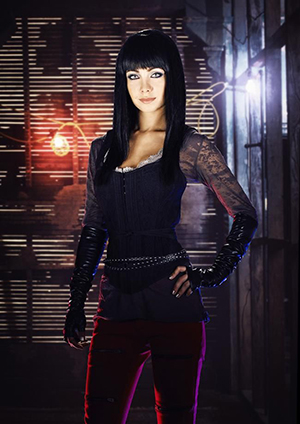 Tonight's episode, "ArachnoFaebia" is Solo's favorite. "It's a really fun story and it involves a creature that has actually scared me since I've been a little girl, so it made for a fun time when we were filming it...

"We all go really crazy in the episode and it was really fun to do something completely different than what we've been doing. And the fact that Kenzi got to shoot a gun at Bo and they both wanted to kill each other was a nice change of pace for all of us and we had a really good time filming that episode. It's definitely one of my favorites."

Solo revealed that the fans will soon get more of Kenzi's backstory. "We'll get to see a lot of new things with Kenzi, she'll be getting into more of her own adventures and into her own trouble. Also in the future, there's love that comes into Kenzi's life, which really turns her life around. So there will be more Kenzi adventures coming soon."

The actress was used to dramatic roles before she got the part of Kenzi. "At first, as much as I was really excited and kind of freaked out to take on this role, at first it wasn't easy and it was really a matter of building this character and really finding who Kenzi was. And of course the comedy just kind of seeped through that. And I think that fifty percent of the comedy is in the writing and fifty percent is how we portray our characters. So the process of finding Kenzi's funny bone, if I can say it like that, was defintely an intersting one, and it was very new for me. So I was really excited and also very scared because I thought. "Oh my God, I'm not funny. I have to be funny, Oh my God, how am I going to be funny?" So it was intersting."

Kenzi is the character with the most funny lines on the series. She revealed that her favorite is "smells like fried bitch," which will appear in episode eight next week. "That's definitely one of my favorites, as soon as we called "cut," every time we couldn't stop just laughing because that line is just so funny. To be honest, we've had so many that it's really hard, after just wrapping season two, to look back and remember specific things. But I have to say that "smells like fried bitch" is something that will live on with me forever." 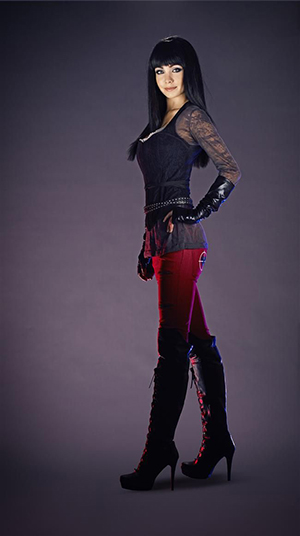 The comedic part of the role is part of what attracted Solo to her character originally. "The fact that Kenzi was the complete opposite of me, and also I really found it a challenge the be the comedic relief of Lost Girl. My entire career, for the most part, has been very dramatic, so the idea of being the comic relief of a show was very attractive to me."

Solo learned about herself from the comedy in her role. "Ironically, through discovering who Kenzi is, I think I've learned in my own life that I can be pretty funny. And I don't think I ever knew that about myself. So the moment that kind of clicked in, I would say towards the end of season one, it was kind of like a cool thing to realize. I thought, "You know what? This ain't so bad." If I can pull off being funny in my own life too, if Kenzi's given me that, then that's great, and I'm so thankful for that becuase now maybe I'll try to be as fun as her in my own life."

When asked about a funny moment from filming that she mentioned in a previous interview, she still remained tight lipped. "It's not in this episode so I don't think I can say yet. But we'll keep this going until I can finally tell you, and I hope that you find it as funny as I do. Because every time I think about it, if Anna and I are having a long, hard day and we're tired and it's cold and whatnot, we always think about that moment and it always makes us laugh. So I can't tell you yet, but the suspense is building."

Being cold is actually one of the hardest parts about filming for Solo. "One of the most challenging things I find is the environment that we often have to film in. It's an interesting thing when you've been working for over twelve hours in below-zero temperatures and you're wearing a miniskirt, and you have to hold yourself up underneath a car as it's moving, and then you have to get on the ground and roll on the ground and there's snow and the whole crew is in parkas and masks, you can't even see anyone's face because it's so cold. We have to just pretend it's not that cold and everything's okay. And if your lip is quivering you got to make sure that no one can see that. So I would say in my experience of Lost Girl that's definitely something that I have to overcome and brave the harsh conditions we are sometimes faced with." 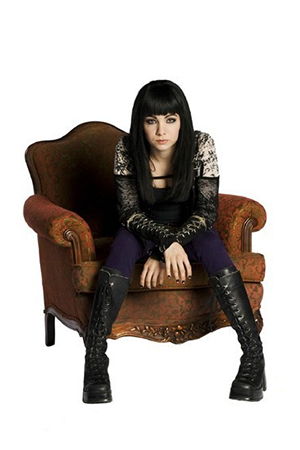 Another challenge that Solo faces is working with green screen. "It's always a challenge when you're being attacked by a monster and he's not really there, or it's a stunt person dressed up in a green suit and you're supposed to be petrified, but there's this green frog standing in front of you waving their arms with little dots on them for the special effcts team to put in later or whatever.

"So the challenge is to make your acting and your reactions to these things that aren't really there, to make it as believeable as possible. That's something we have to deal with very often on this show."

Solo gets a long well off set with the cast, including of course Anna Silk, and also Kris Holden-Ried, who plays Dyson. "We're like two peas in a pod or, whatever those analogies are, like peanut butter and jam. We have a pretty great relationship. I really look up to Chris because I think he's such a gifted actor and it's [unintelligible at 10:20, maybe "a joy"] to work with him in that sense. I really enjoy any time we have scenes together. But off-set...you know, I'm the youngest person on set, so I guess I'm the least mature of everybody. But Chris, he's a big kid at heart and we just have a lot of fun. He's got an amazing sense of humor, he's always making us laugh. Some days you can find him in the corner playing his guitar, singing songs between setups or whatever. So we're always having a lot of fun."

The actress also enjoys working with Paul Amos, who's character is one of her favorites fae. "I'm a really big fan of Vex. [Amos] really makes this character so awesone. I wish I could think of a better word, but he's funny and he's charming in the most revolting way, and the fact that he can manipulate and control whoever and whatever he wants, and that British accent, it just makes everything way cooler in my book. So I really love Vex. And I'm also a really big fan of Dyson, I think what Kris has done with that character is just so one-of-a-kind."

In the future, Solo has thought about some other types of roles she'd like to have. "I have a lot of dream roles. There are a lot of things that I look forward to doing, film-wise, in the future. 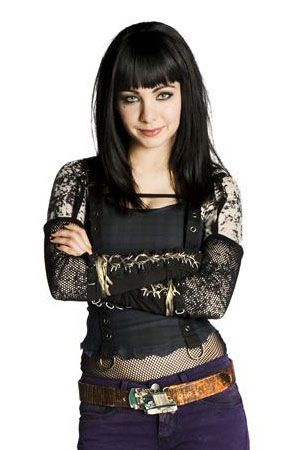 "I think film is really where my heart is. I love TV, but from the time I was little - movies make me happier than anything. And there's really a lot of directors that I dream of working with. One of them - I had a dream come true and I did get to work with Darren Aronofsky, but I hope I have the opportunity to work with him again in the future, I'm a big fan of his work. And, you know, Woody Allen and Martin Scorsese and Danny Boyle, there are just so many amazing directors that I have been lucky to work wtih and I also look forward to getting to work with in the future."

Solo has also thought of who she'd love to see guest star on Lost Girl. "There are so many amazing actors that would bring so much to the show. But if I could wave a wand and make magic happen, I would have to say that Pacino, if he could come in and play my mafia dad - because my dad hasn't been talked about too much yet, only that he's involved with the mafia - so if Pacino could come in, I'd say I could die happy, right there."

The actress has also been inspired by other actresses. "I am really inspired by and love actresses who are naturally funny. Also actreses who have the ability to be equally dramatic and funny. As examples, in my head people that stand out are people like Cameron Diaz, or more recently someone like Sofia Vergara and Zooey Deschanel, these women who are hysterically funny but you believe them and it just seems to come so naturally. So that's just something that I really try to keep in mind and that's something that inspires me."

Solo will begin filming season three soon. "I just hope the fans enjoy the ride we take them on in season two and I'm sure it's going to get bigger and better as we go on."