Tonight Syfy premiered season three of its hit series, Wynonna Earp. In the episode, Wynonna (Melanie Scrofano) and the town battle some sexy supernatural strangers, while Doc Holliday, played by star Tim Rozon, is captured by one with a familiar face.

Earlier today, Rozon talked to SciFi Vision in an exclusive interview about season three and what’s next for Doc Holliday. 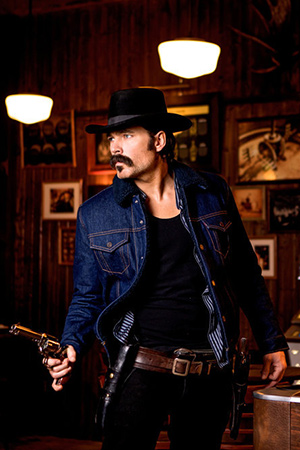 Now that Doc and Wynonna's daughter Alice is gone, Doc has changed. Can you talk about how giving up the baby and some of the other events of season two will continue to affect him through this season as a person?

TIM ROZON: He’s changed, but he changed at the end of last season to. One big overlooked character arc that Doc Holliday had, even before giving away Alice, or knowing he had an Alice, was when he went to Hell in that alternate universe. I mean, he went to literal Hell. We didn’t hold any punches with Doc. He had burn marks from shackles on his wrists. I had the makeup done every day, so I know they were there.


And we never really talked about what it was like, but he knows that in an alternate reality, had he gone down his current path, he would have ended up in Hell. And we’re talking about a guy from the 1850s, who honestly, Hell meant more to maybe than this generation or whatever, but let’s not take away the gravity of what Hell was probably really like. You know, people just burning alive. It’s Hell [laughs] it’s the worst day imaginable.

And he kind of went there and came out of it and came back, so he definitely doesn’t want to go back there. And I think he’ll do whatever he can within his power to never go back to Hell again.

He’s also facing mortality now. So, the fear of Hell is something he has to deal with that he hasn’t for the 130 years that he was trapped in the bottom of the well. As much as being stuck in that well sucked for Doc, at least he didn’t have the fear of going to Hell, which now he does.

And the woman that he loves he had a baby with that he had to give away; it’s another reason for him to want to stick around. So, there’s a lot going on for Mr. Doc Holliday.

Having and losing Alice though has definitely affected his relationship with Wynonna. She even makes a comment to Waverly (Dominique Provost-Chalkley) that Doc won’t touch her unless they’re training or talk unless he’s angry, so she keeps him training and angry. Can you talk about how it will change their dynamic this season?

Well, their relationship is strained, and it’s not a simple love story. It’s never going to be easy. [laughs] Doc’s, you know, a 185 year old cowboy or whatever now, who was best friends with her great, great, great grandfather, and it’s not going to be as easy as some of the other relationships on the show. Though I’m not saying they are easy in any way. You know what I mean; it’s just not simple. There’re a lot of complications there, and I just don’t know if they’ll ever truly be able to just be happy together.

You know, my favorite scene ever, and I believe that he meant it, was at the end of season one, when Doc told Wynonna how he’d like to go off with her and grow barley and live in a little house and be happy and be in love. And I just think now he’s starting to realize that that’s never going to happen. There’s just too much going on. There’re too many scars and wounds that haven’t healed on both of them. 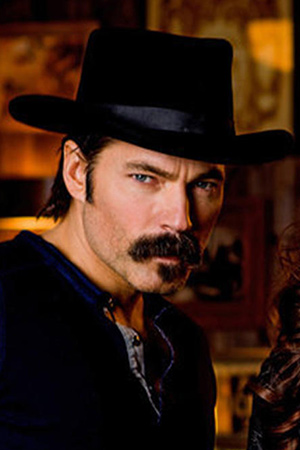 Speaking of wounds, last season we had talked about Doc’s mortality, and the possibility of him getting sick again, and at the time, you couldn’t really say anything. Now that he’s mortal, I know you can’t tell me any specifics, but should we be worried about him?

Well, I mean, if anybody notices [when they’re watching] 301, or after they’ve watched it, if they rewatch it, they’ll notice that his hand is bandaged. This is his gun fighting hand.

And why is his hand bandaged? Well, if anybody else remembers, Bobo (Michael Ecklund) threw a knife through it when Bobo came out of that tunnel and Jeremy (Verun Saranga) saved the day with his ray gun.

Doc and Jeremy had an interesting little exchange where Jeremy said “Wayhaught” for the first time. And Doc responded by saying, “Wayhaught? What’s that?” I don’t know if anybody remembers that scene, but around that same time was when it happened.


Now we notice that his hand is bandaged, and why is that a thing now? I don’t think in season one that would have been so much of an issue. You know what I mean? But now it’s there.

It seems to me like Wynonna has chosen Doc. Is it safe to say that? Or will there still be just as much of a love triangle with Doc and Dolls (Shamier Anderson) this season?

I would like that [laughs]; I would definitely like that, but no, I don’t think that she’s made that choice.

Do you think that Doc will ever meet Wynonna’s mother (Megan Follows), because I think that would be very interesting.

[laughs] I’m pretty sure they will have a meeting. Don’t forget, she’s Alice’s grandmother; she might want to meet the baby’s father. Let me say this, Wynonna Earp’s mother, there is absolutely no doubt that she is Mama Earp.

Would it be safe to say we may see the baby again at some point? Can you tease anything about that?

Again, I’ll say this. As Doc, I certainly do hope so. As myself, I cannot say too much there.

In tonight’s episode we meet Contessa (Chantal Riley). Will she be back again as part of the story, or is that pretty much it? Is there anything you can tease?

I mean, it even goes back to the hand bandage. Nobody thought about it when Bobo threw the knife through my hand. Think about this, what hand was it? Right or left? Which hand does Doc shoot with? Is he the world’s fastest gun fighter? 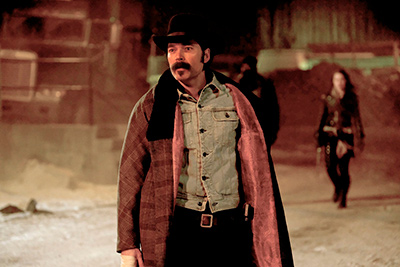 Hopefully he will still be!

I don’t know. All I’m saying, is I don’t think anybody or anything happens without a reason.

So is it safe to say that whether or not the character returns that she will at least be brought up again?


Can you talk about filming and the logistics of your escape from the bus in the episode?

You know, that was one of those super fun scenes. We were on some sort of party bus thing. It was a limousine that they rent out, because, how can you get a stripper pole in a limousine? Well, they exist. And they found one, but then they needed to find a way where you could actually have an actor climb up the stripper pole and break off of it without breaking his arms and his legs, because I was actually handcuffed. And at the same time I’m being electrocuted. So, you’ve got all these fake electronics going off, and I’m stuck on the thing.

Of course I wanted to do the whole thing myself. I did most of it, but right at the end they wouldn’t let me fall from the top of the pole to the ground. So for that last bit, we actually brought in Doc’s stunt guy, this guy by the name of Denton Edge - yes, coolest name ever and a pretty cool guy. He has been Doc's stunt guy since season one. So, he actually did the falling part, the rest of it was all me.

There’re just some things they won’t let us do, but those days on set are just the best. Wynonna’s pretty much like that every day. You’re just doing super fun stuff when you’re acting. You know, like how do you not have fun pretending to get electrocuted, stuck to a stripper pole, and you’re handcuffed? It’s just super fun stuff to do.

Speaking of those kinds of scenes, do you have a favorite fun scene from this season like that that you can think of? Or does that rank top?

Oh, I mean there’re so many. I’m just so scared of spoilers. You know, I’d never want to be responsible for any type of spoiler. So, I’ll just stick with [episode one]. Like all of that was amazing, just to get back and do all that stuff again, but there was a scene when I finally escape, and I’m out of that hatch, and I’m running after Contessa, where I’ve got no shoes on. And don’t forget it’s - I don’t know the Fahrenheit Celsius thing, but it’s -30 in Calgary, and there’s snow, and I’m running around with no shoes on. It was pretty awesome. And I didn’t want to [laughs] do too many takes there, because literally my feet would have frozen up, like I would have lost my toes if I would have done it too many times, but it was pretty fun to do.

[laughs] I don’t know. To me that doesn’t sound fun; I would have gotten shoes! 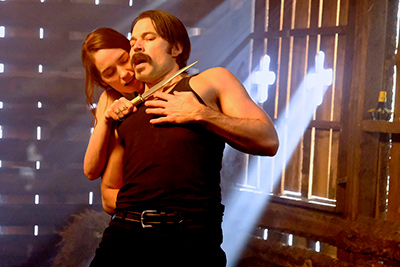 Is there anything you can tease about the next episode?

The second episode is going to be the most talked about episode in the history of Wynonna Earp. That’s a fact; I’ll put money on it.

Can you give me a clue to why? [laughs]

No, I cannot definitely say why, but you can trust me right now when I say that to you.
Twitter
BotonSocial por: SocialEmpresa
Category: Interviews