Tonight the third episode of the series Bellevue, "The Guy with Fire in His Eyes," airs on WGN America. The eight-episode series takes place in the town of Bellevue, when a high school hockey star struggling with their gender identity (Sadie O’Neil) goes missing. Detective Annie Ryder (Anna Paquin) and police chief Peter Welland (Shawn Doyle) are brought in to investigate.

Yesterday, the co-creator and executive producer of the show, who also directed some episodes as well, talked to SciFi Vision in an exclusive interview.

SCIFI VISION: Can you talk about how you became involved in the series and how the concept came about? 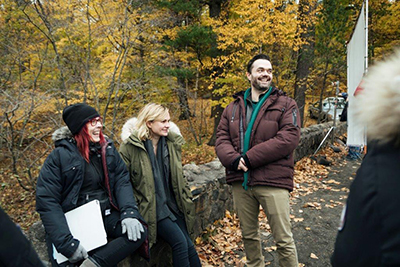 ADRIENNE MITCHELL: I did a series called Durham County years ago, and it was another really unique crime series. There was a writer who was really obsessive and really loved it and wanted to work with us. My writing partner Janis Lundman said, “Why don’t you write a pilot for us and we’ll take a look at it?”

So, she went away for a couple months, wrote a pilot, and she sent it off to us. I was on another show, coming back from a casting session in Los Angeles, and I had a kind of pharmaceutical cocktail, because I have a fear of flying [laughs]. So, I’m bleary eyed, and I’m reading this going, “This is insane; I love this woman’s voice. I love her characters; I love the authenticity.” So, when I landed, we optioned it. And that amazing writer was Jane Maggs.

And what we did is we worked together on the show for about a year to develop it. We filled out the world and what the community of Bellevue was like and where it was located. We came up with a defunct mining community. We wanted to look into how cycles of intolerance repeat themselves, because communities turn a blind eye to things. So, we thought it would be very interesting to connect a murder of a young girl who’s considered quite feral and quite an outsider in a town twenty years ago, to another present day outsider who is also prey to the intolerance of the same community.

We have friends who have had experiences where they were subjected to transphobia. We wondered what it would be like for a teenager exploring their gender identity in a small close knit community and how much more difficult that would be.

So, it was very important to us, and we have had some really meaningful dialogue with transgender viewers about the series over social media, and it has been a very thoughtful and positive dialogue.

...So that’s kind of how it all was born. It was a very, very beautiful creative experience with a very bright young writer. This was the first series that she has put into production. 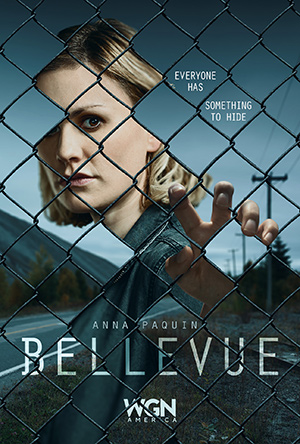 You have kind of done a lot here. You co-created the show, you’re an executive producer, you directed some episodes, and from the IMDB it looks like you may have also written for the show. Is it hard to do all those things for one show, or does it make it easier because you have more creative control?

I did not do any writing. I worked with the writer as a director and producer. Jane did the writing, and we brought on Mowyn Brebner and a few other awesome Canadian talents to write, but I was in the room as a director. With that show I was in the room; I was working through the script from a director’s perspective and giving comments and coming up with things. And you know what it is? It’s finding a creative partner that you click with and that you have the same sort of ideas around what you want the series to say.

And it’s awesome to be able to do all those jobs and have creative control, because then there’s more of a sense of a stamp or a vision that gets executed in a consistent way.

So, I think that’s why I do love it. I just love being in on something when it’s just really in the early stages of being developed, because it sort of becomes part of your DNA, the show.

So, when you direct it, when you’re on the set, it’s like you know it so well that you have the courage to be free and change things that happen.

Like Shawn Doyle and Anna Paquin had a chemistry and a connection that was coming through those characters that we hadn’t actually written in the series. We started to see this really interesting relationship, and we deepened the Peter character, and their relationship became a lot more complex as a result of what we saw on set. They just evoked a long history and we just started getting excited about ‘oh, we can go much further with is.’

Because Jane and I were so involved in the beginning and were doing so much of everything, I think what that affords you, is you know it so well that you have that freedom to make changes that will eventually be more enriching for the show.

Can you talk about the casting process?

I think the first was to get the lead, and, you know, casting is such a timing kind of scenario. So, we got an order I think to do the show in May. Then we had to shoot end of September, beginning of October [2016], and had some relationships with an agent at WME Lorenzo De Maio, and we gave him the script, and he immediately thought of Anna Paquin. I know that she was looking at the time for a really cool detective series, and she’s a crazy crime fiction addict, so she wanted also to play a cop; she’s always wanted to play a cop. 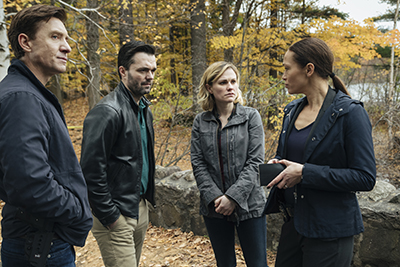 So, it was a real timing thing. This character is feisty and messy, and, you know, raw and imperfect, and it’s just something that just hit Anna right away.

So, she read the first script, and then she asked for the second, the third, the fourth. Then we had like these scrawls for the rest of the episodes, just like brainstorming things [laughs], because we still hadn’t written them. She wanted those.

And then I was in LA casting, and she wanted to meet with me. So, we had an awesome lunch in Venice, and she and I just kind of clicked on the creative approach and all that. And I swear, it was after we just walked out; she said, “I’m in.” It happened really quickly. It was amazing.

I heard or read somewhere that the cast got the last scripts later in filming and that no one knew who the killer was for except the person playing the killer.

Can you talk about that and the decision to do that and how you feel it affected the series?

We thought it would be really interesting. We just wanted to make sure that the authenticity of not knowing who it was could just really play, and we didn’t want any subconscious different treatment of the person who turned out to be the killer. We wanted that to be something that was quite neutral; we didn’t want them to sort of read into anything.

So, it was a very conscious decision, and I think it worked, because I think when we started to film the scenes when the revelations were coming out, I just felt that it was a little more fresh and real in the characters who find out and therefore a much more sort of authentic performance around that.

Did you hear the cast members trying to guess who it was?

Oh my God, it was hilarious. Nobody got it! [laughs] Nobody got who it was, but everyone was guessing. 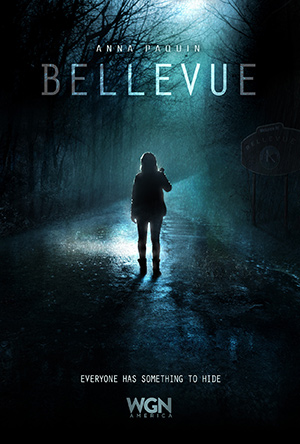 I had originally thought Bellevue was a limited series, but read there could be a second season?

I think our hope is that we’ll all come back to do a second season. Right now we’re very happy with its performance. It’s getting an awesome, passionate, loyal following. WGNA is very happy with the first episode across the premiere week. I think 2.3 million people saw it; it’s a large, sizable number which they’re very proud of. We keep getting fans, and the number is growing, and it’s a really interesting and very vocal group of people. They’re so many amazing things that are happening. So, we hope we can do it again, absolutely. Another mystery for sure.

Can you describe the series in three words?

I’m not a writer; this is a Jane question!...Eerie, haunting, twisted rabbit hole. That’s not three! Is that okay? Twisty-rabbit-hole; that’s a phrase. [laughs]

This Season on Bellevue