SciFi Vision | Interviews | Exclusive: Karin Konoval on her Journey Through The X-Files and Beyond

Exclusive: Karin Konoval on her Journey Through The X-Files and Beyond

Last night FOX aired a brand new episode of the hit series, The X-Files. In the episode, “Plus One,” Mulder (David Duchovny) and Scully (Gillian Anderson) encounter a pair of twins, both played by Karin Konoval, who are somehow causing people to kill themselves, thinking their own doppelgänger is to blame.

Konoval, who also played the iconic part of Mrs. Peacock in season four’s “Home,” as well as Madame Zelma in season three’s “Clyde Bruckman’s Final Repose,” recently talked to SciFi Vision about her work on The X-Files as well as teased her upcoming role on Freeform’s Beyond.

SCIFI VISION: This was your third time on The X-Files, what was it like being back after so long? 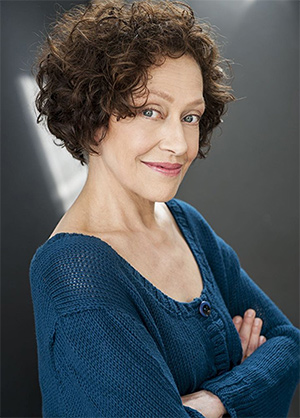 KARIN KONOVAL: It was a total joy to be back on The X-Files. The roles that Chris Carter wrote for me to play were just about the best gift I could think to receive as an actor. I was clapping my hands with glee from the moment I read the script; what a treat.

And the filming was so much fun. I loved working with director Kevin Hooks and with David Duchovny and Gillian Anderson again, and Chris, who I can only describe as a magic man, both as artist and human being, was there throughout. The crew is fantastic on the show; the whole experience was a delight.

Can you talk about who the twins are that you play in “Plus One” and maybe tease a bit about their unique connection?

Judy and Chucky Poundstone are twins who have been playing the game of hangman together, telepathically, since they were kids...and wreaking havoc.

Was there any place other than the script that you took inspiration from when creating the characters in the episode?

Was there any other special preparation or research you did for the roles?

I actually did a sort of “test tape” initially for the roles with eight pages of the script and a scene for each of the characters, each side of each character. Chris wanted to see this to make sure that I could convincingly transition from female to male, and I was very happy to do it, because it gave me the chance to fully explore and land the characters for myself.

I spent two days of work by myself at home before doing the audition “test tape.” I began by solidly memorizing the eight pages of script, and each scene led me to a sense of the four distinct physicalities and the four distinct vocal qualities I would use for each.

It was fun. I found with “nice Judy” a sense of her approaching the world sideways and fearful, kind of leading from her left or right shoulder and with a light, careful voice.

“Nasty Judy” felt like a chest forward, feet planted, come-and-get-me-no-apologies kind of energy, and a voice rumbling up from the basement.

“Nice Chucky” felt just relaxed and all fine, kind of leaning back and letting his stomach hang out.

“Nasty Chucky” felt like he entered the world like a knife or a laser from the left side of his forehead and his chin.

The physicality I discovered with each led me to their voices, and once I'd found each separately, I practiced being able to switch from one to the other on a dime.

For the audition test tape that I did with my agent Aaron at our agency, I had to be able to change wardrobe fast. So, I went to a second hand store and found a shirt for Judy that I could hold closed, prim and proper, for “nice” Judy, and then open it up to show lots of cleavage for “nasty” Judy, who I also added lipstick for.

With Chucky, I just put on a man's shirt and vest, greased my hair back, thickened my eyebrows with a pencil, and glued on a novelty store mustache. 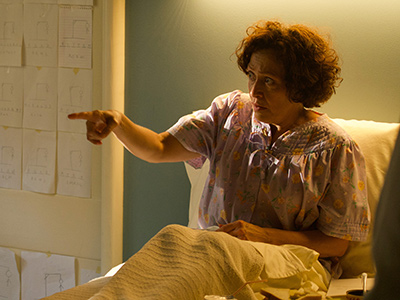 The whole change from Judy to Chucky took about five minutes. Once I had that down, changing both energy and clothes from one to the next, I went in and did the taping.

What was wonderful, was Chris and the creative team on the show wished to keep and expand on the exact choices I'd made for myself, so we did. I've still got pictures of my test efforts at home. Pretty close to where we wound up on the show.

When creating them, what were some of your thoughts that went into the characters in the sense of them sort of reflecting each other? For example, as twins, I'm assuming you thought about their similarities; maybe you purposefully performed certain movements the same way for both of them. Was there anything like that?

In fact, I didn't. I was entirely focused on establishing each side of each of their characters as a distinct personality, and to be honest, trying to make them more similar never crossed my mind.

One thing I did do though, in the twin theme, or reflection theme, was that I decided to make one of them left handed, and one right handed. There's a lot of hangman drawing in the show, so I thought this would be a fun little private thing to add to each. I decided, for whatever reason, that Judy would be the one with better penmanship, so I made her left-handed, because I'm left handed and can write more cleanly that way. I made Chucky right-handed -- something about the disaster of a house that he lives in, etc. -- and so writing for him was much more of an effort for me, and it was also scrawlier.

Do you have a favorite scene or line in the episode?

I do have a favorite line in the episode, but unfortunately, due to circumstances beyond artistic control, the line was cut. So, I won't tell you what it was, but I can tell you that it was a Chucky line. I'll also tell you that when I got the first whole version of the script, I was on a set filming another show, Exorcist, when I read it. I was sitting quietly off set in my chair while close-ups were being filmed on another part of the scene I was in, and when I got to the line that was my favorite, I barked aloud with laughter. And then I heard, “Cut! Quiet on set, please!” and took my choking, laughing self outside where I could laugh my head off for a few minutes.

There's a really fun scene where you throw “Dookie” at Gillian. Can you talk about filming that? I can imagine there had to be some funny moments or bloopers during those takes.

Let's just say, it was fun. I am a terrible, terrible thrower, so when it came time for having to land Dookie in a precise place, like hit a bulls eye, that glorious job went to the fabulous props master, who was brilliant at it.

You originally played Mrs. Peacock in “Home,” which is such an iconic character. You obviously had a lot of practical makeup effects and prosthetic effects for that, as well as makeup to make you a male version of Judy in “Plus One.” Can you talk about those experiences? 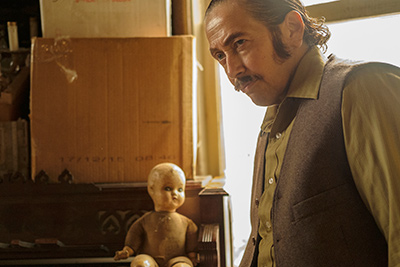 So, with Mrs. Peacock, a sort of “coffin” box was built for me that fit me tight, and my shoulders and head protruded out the top of it. Mrs. P's arms, what there were of them, were a created thing that was attached to my shoulders and then worked electrically as I recall by an off-screen SFX person. I, Karin, worked with my head and my shoulders, which would initiate the movements.

I can tell you that being in that box and under that bed was one of the hardest, most claustrophobic and terrifying experiences for me as an actor I've ever had. The scene where they first pulled me out and I was hollering blue murder was definitely an expression of what was going on for me under that bed between takes. So, I'm not surprised at how it terrified viewers, because I myself was terrified!

The facial prosthetic and makeup was actually quite minimal, compared to other roles I have played, like the Wicked Witch in Tin Man, or the evil queen in Snow White, for example. Those were huge “hard prosthetic” roles that took hours to accomplish. With Mrs. P, the brilliant Toby Lindala created only a strip of facial prosthetic that went across part of one side of my face, and then also there were her terrible teeth, a mouthpiece that I would gag on throughout filming. There was otherwise very little makeup. It was just me.

The makeup he created was simple, precise, and allowed for me to act the role completely. My hair was greased back with a hair glue, thicker eyebrows drawn on, sideburns and a mustache added, and just a light spray of five o'clock shadow around my chin. That's it. Nothing else. The longest part of the process was the glueing down of my hair, which is naturally curly and sort of huge in volume.

Switching gears, Beyond season two is premiering. Can you talk about your character and what your fans can expect?

I was only in two episodes of Beyond early in the season. It’s a wonderful show. I play a psychiatrist. I think that's all I can tell you.

I also wanted to ask you about the Planet of the Apes films. You did motion capture. Can you talk about that experience?

I played the role of Maurice the orangutan in all three films, and it is one of the most challenging and rewarding roles as an actor I've ever had, in every conceivable way. I wouldn't describe it as “doing motion capture.” I would describe it as playing a role no different than any other role I've ever played, finding the psychological, physical, and vocal integrity of the character. Playing Maurice's journey through all three films was the same as I would play any other character. Yes, my performance was captured using performance capture technology by the brilliant Weta Digital, but we filmed all three films the way any others would be done: on location, in all the circumstances you see in the films. I'm very proud of my work as Maurice. 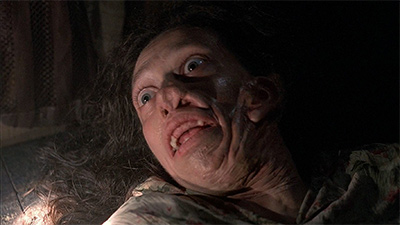 You've been in shows like The Magicians, Travelers, Continuum, Fringe -- quite a lot of science fiction, and a lot of my favorites, actually. Does playing those kinds of roles interest you more? If so, what is it about sci-fi or genre television and film that you are drawn to?

I love to work, period. I think it's simply that these are some of the series I happen to have been cast in. I mean it though; I really do love to work. I love investigating interesting, challenging roles; I love the filming process, I just love it. I can't really answer any better than that.

Out of all of them, what has been your favorite role so far and why?

I have several favorite roles over the years, many of them roles I've played onstage and especially in musicals, some of them roles I've played onscreen. I can certainly say that in the past few years the role I had on Travelers was a very cool one to do, and playing Maurice in the Planet of the Apes has been, as I said earlier, perhaps the most challenging and rewarding role I've ever undertaken. Playing Chucky and Judy has been a blast, possibly the most fun I've had onscreen to date!
Twitter
BotonSocial por: SocialEmpresa
Category: Interviews