Exclusive: Laura Mennell on her Role in Syfy's "Alphas"

Laura Mennell, one of the stars of the new series Alphas, which airs Mondays on Syfy, is not new to science fiction. Fans will recognize her from her work on such television series as Sanctuary, Eureka, Fringe, and Supernatural, to name just a few. She also starred in the supernatural thriller 11:11 and played the part of Janey Slater in the movie Watchmen.

Mennell recently took some time to talk about her new role in an exclusive interview with SciFi Vision. 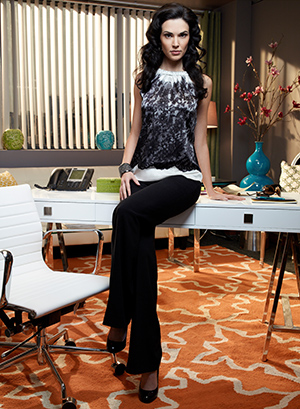 Acting was an interest to Mennell from the beginning. "I was always interested in the arts as a child - painting, dancing, violin, you name it. Acting though really seemed to stick - I loved it at a young age.

"In high school, I was always a bit of drama geek, and that passed over into college theatre school where I started training in film classes and auditioning for film and TV. I love it - always getting to try new things, exploring different characters. You're always learning something as an actor. Sometimes you get asked to do strange things and your job can turn into a series of fun dares. You just take the plunge and see what works!"

Mennell almost passed up the role of Nina Theroux, until she read the script. "I was reading for a so many pilots I actually took a few days off to visit my Dad and almost turned down the audition. Luckily, my agent called to tell me I couldn't pass this one up so I read the script and was hooked.

"I did a series of taped auditions from Vancouver and sent them to LA, then flew down for a screen test. When I finally heard the role was mine, I was ecstatic! I really love the show and my character Nina. She's such a great strong female character - very capable and extremely intelligent. Her ability to influence people into doing whatever she wants is a pretty fun thing to play. Nina gets to do things the average person only dreams about: who wouldn't love to tell a cop to eat a speeding ticket, and have him actually do it?"

Nina is one of five main characters with enhanced abilities on the series. "Alphas is about a group of seemingly normal individuals with extraordinary mental and physical abilities. We use these talents to solve crimes the government can't seem to crack, and generally the cases involve other alphas.

"It's a great show because we have these super-human abilities but we're not anything like your traditional super-heroes. Our characters all have these extraordinary abilities, but it's in a real-world setting. We're far from your traditional "heroic" superheroes. We all have flaws. Our abilities all come with their downsides, and our quirky personalities clash at times while solving these cases."

Mennell's character is an "influencer," or "pusher." "Nina is a great, strong female character. She's extremely intelligent, very capable and has a bit of a dark past that she doesn't like to talk about, as you'll learn a little more about as the season progresses.

"She's able to influence others into doing whatever she wills. Her ability to manipulate people comes in handy on the job, as she cuts through red tape and gets unwilling suspects to dish out important information. She also has a lot of fun with her gift though, and has a habit of using it for her own gain. I think the audience will have fun seeing what she does with it from week to week." 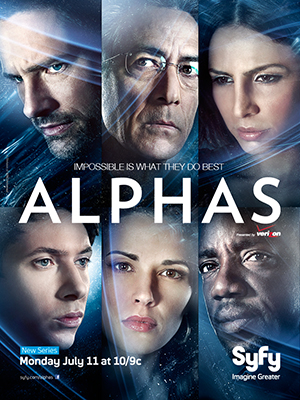 Mennell thinks it is the characters that will attract people to the series. "I think the relationships between all the characters on the show will really draw people in. I know the show has the whole investigatory element to it, but I think it's how we interact with each other that really sells it.

"The show may also be a drama in many ways, but there's a lot of fun humor involved. Gary's character, played by Ryan Cartwright, is pretty funny. He cracks us all up on set! Alphas is pretty exciting, intense, and action packed. The show is a ticking time bomb and will have people on the edge of their seats!"

There was some preparation for Mennell involved in taking on the role. "At first I watched more sci-fi genres and investigatory type shows for a little inspiration, and enjoyed doing odd things like watching clips of people being hypnotized on Youtube, but I think with Nina it's been more important for me to simply daydream a little about her...and also just allowing myself to intuitively feel her out.

"Nina also has a lot of strength within her, and I've explored getting physically stronger as a person, because I think it makes you feel stronger mentally. Prior to the show, I started running a lot, but now I'm working with a professional trainer. It's great inspiration. My trainer kind of kicks my butt a bit though, but in a good way!"

Nina is a fun character for Mennell to play. "I think it's a lot of fun playing with Nina's ability and love that she uses it to get the best clothes, the best cars, the best of everything, just because she can. It's a lot of fun working with that, and I love that the talent makes her extremely valuable to her team! Nina can definitely save the day at times.

"I don't think I'd change anything [about her] right now. I love reading the new episodes every week and seeing what the writer's have come up with. Literally every episode keeps getting better. I think the audience will feel that way too."

Mennell is very different from the character she plays, but that is part of what makes it fun. "Nina and I are pretty different people. She drives fancy sports cars while I drive a smart car. She uses her ability to her advantage a lot of the time, whereas I'd most likely use it to better the world...maybe make people more environmentally friendly and vote for the Green Party! But its fun playing someone so different." 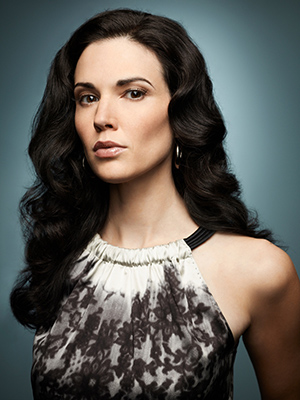 Nina's power would be a fun one to have, but not to keep, according to Mennell. "I'd pick Nina's [ability] because it sounds like a lot of fun, but only for a day or two. I think getting things too easily in life isn't really a good thing. It's good to have to work for things; otherwise you wouldn't appreciate what you have in the same way."

One of the main challenges Mennell faces on the set is running in high heels. "There is so much action in the show and I've even been running around in stilettos at times! My feet are taking a beating, but I'm getting pretty good at it!"

The cast is wonderful to work with, according to Mennell. "I'd say my favorite part about working on Alphas has been working with our tremendously talented cast. Ryan, Malik [Yoba], Warren [Christie], Azita [Ghanizad]...they are all so great. And of course it's wonderful to watch David Strathairn in action, he's such a brilliant actor and a very genuinely kind person as well. I think we're pretty lucky on the set of Alphas, we have a great group of actors and a really great, hardworking crew. It's nice working with such wonderful people, because we work some very long hours at times."

The writers and producers are open to the cast's suggestions when it comes to the script. "They love when we inject adlibs, which is great, and has added some wonderful energy to the show."

Mennell is a fan of different genres, including science fiction. "I don't like to limit myself to certain genres—if a show is good, it's good. There's great science fiction films out there, like Aliens, District 9, and E.T.. There's also been a lot of great TV shows, like The X Files and Firefly. Right now I've been enjoying Roswell."

One of Mennell's favorite roles was the sci-fi action movie Watchmen. "I loved being part of Watchmen and playing Janey Slater. Shooting it felt like being placed in a new and exciting world. The sets and wardrobe were absolutely incredible! And Zack and Larry Fong (the cinematographer) made such a seamless transition bringing the comic to life on screen. It literally looks like certain panels of the graphic novel where ripped out and placed them into the film. I think visually it's pretty brilliant and Zack captured the tone of the comic so well."

Another of Mennell's favorite roles was the Emmy winning film Flight 93. "I loved being part of Flight 93, although it was a little scary playing someone like Elizabeth Wanio. Not only was she this wonderful, real life person, but just knowing her family members would most likely watch the film at some point heightened its importance for me. I thought it was a lovely tribute to those on that flight and an important film to be part of." 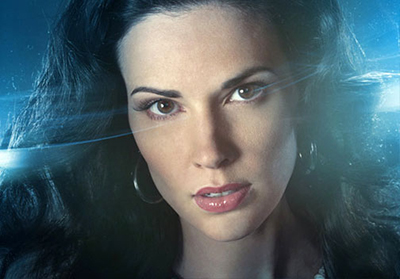 Another great role Mennell played was in the hit television series Fringe. "I loved working on Fringe. I think it's a pretty cool show with a great cast.

"And I really enjoyed playing Rose; she was this great tragic character. When she speaks lovingly about her father even though he's responsible for her physical mutations, and says how he found a solution for them to appear normal through the visual illusion he created, that scene always really got to me emotionally.

"I remember I shot two close ups for that scene. One that got screwed up because someone's cell went off, which was annoying! During the second take I had one single tear that came down in the scene, and I remember being so happy it didn't fall down the other cheek. If it had it would have ran underneath the prosthetic mask I was wearing, and the camera would have never picked it up!"