Exclusive: Anna Silk on Bo's Faemily and the End of Lost Girl

Quite a lot happened in the powerful Lost Girl episode, "Family Portrait," which aired tonight on Syfy. In the shocking ending, Bo, played by Anna Silk, lost both her mother and grandfather.

The actress recently sat down with Jamie Ruby of SciFi Vision in an exclusive interview to talk about Bo's reactions to these losses and what's to come next on the series.


SCIFI VISION: This season brought in Eric Roberts as Bo's father, Jack/Hades. Can you talk a bit about working with him? 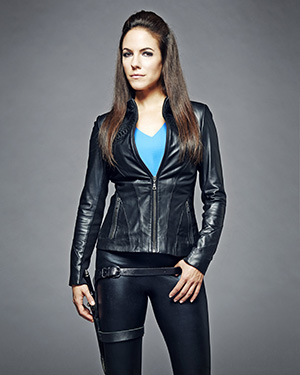 ANNA SILK: He was a force. He was really interesting to work with. I'm the one who worked with him more than anybody else on the show, so I spent a lot of time with him, and he's really interesting to watch from a performance point of view, because he never does anything the same way twice. He really keeps you on your toes, which is kind of what the character needed to do to Bo. And he just brings a lot of energy to set and is very captivating on camera. He was lovely to work with.

I had a really good experience working with him, and I just feel like he was the right choice. He's really such a dynamic performer and really interesting to watch. I've never seen anyone quite like him.

In tonight's episode, Aifa (Inga Cadranel), Bo's mother, returned. Can you talk about how that affected Bo?

The way that she sort of appears out of nowhere, and you know, now that Bo has met her father and all that kind of stuff, to see her mother appear again in that context, is very confusing to Bo. It's upsetting when you finally have both of your parents in one room when you haven't your whole life, and when you also have gone through what Bo has gone through, it's a pretty big reveal and a pretty big shock. But it's also so sad, sort of what happens with Aifa, because she's taken advantage of, because we've always seen her as so strong, and she is really really strong, but we really see her vulnerabilities in that episode, and I think that's really hard for Bo to take.

In the episode, Bo is being told that Trick (Rick Howland), her grandfather, has been lying and keeping secrets from her. Can you talk about Bo's struggle, specifically in this episode, in choosing which side of her family is telling the truth?

It is a struggle, and, you know, doubt is put into her at the beginning about Trick, who's been her anchor in terms of real family and someone that she has come to trust. I think it's funny, because I feel like that's a really complex, but common human reaction, that sort of regular people have when they're faced with something. Sometimes the people that we love the most and that are closest to us we can be the meanest to, or put doubt on that relationship, because of really big feelings about something else. So, you know, these huge feelings come up for Bo, because both her parents are back, and she starts to distrust the people that she's come to know as real true family, and who are really loyal to her. So it is a really conflicting episode, actually; it was tough for Bo. 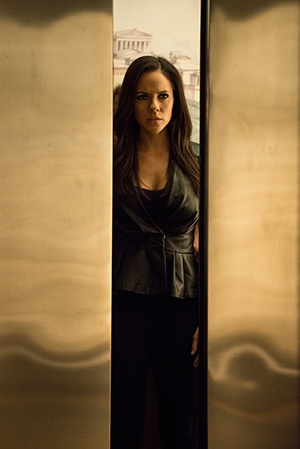 This episode has some big losses. Can you talk about how that will affect Bo moving forward?

The losses are huge. I mean because not only is it a personal loss for her; it's the saddest part of losing her mom, after seeing her go through that kind of pain, and she understands, probably for the first time, what kind of life she really had and what kind of pain she endured.

And then of course losing Trick, I mean, what I love about Lost Girl is there are huge consequences to living in the Fae world, and we've never really shied away from those consequences. People don't just kind of almost die all the time and then come back all the time, like that's just not going to happen. And so there are consequences to the big evils that exist, and that consequence was huge for Bo. I mean, losing Trick was just a tremendous loss for everybody, but I think for Bo, it's just so personal.

And there was something really kind of beautiful about that scene though, because she sort of also accepted the fact that he was going to go. She knew she couldn't really do much about it.

I had goose bumps thinking about it when we shot that day, and of course Rick had been such a big part of our show as well as Inga, but particularly Rick, because he was certainly there more often, and we were all really sad to see him go. There was a real like palpable energy in the air that day.

Trick's parting words to Bo are that she is of his blood. Is that implying that she may have his powers to rewrite history with her own blood?

I don't think you're off base. I think that there's a lot of meaning in that. It's a reminder to say like we're family, you know, don't lose your way, I think. But also there is something to be said about the power of the Blood King and where her genetic lineage lies. So I think you're definitely thinking in the right way.

After the end of last week's episode, with her father pretending to be her, and essentially raping Tamsin (Rachel Skarsten), it's now clear to not just the audience, but also Bo, that her father was evil all along. Will knowing that make it harder or easier for her to make it through everything?

Well I think it kind of does both. You know, Eric Roberts is so great at playing someone that you wanted to hate, but he was also very charming, and also very charming to Bo. I mean, you know, she has her father there. So it's hard to believe that he could be capable of that kind of evil and have a bigger plan at play. So I think going forward, I mean, Bo has always been a fighter, so when this happens, she definitely moves forward with a plan. And you have to be careful, because you can get careless because you're so blinded with rage and hurt, but I think it's sort of a full circle moment for her as the series sort of comes to an end, and she realizes sort of the true source of her power. 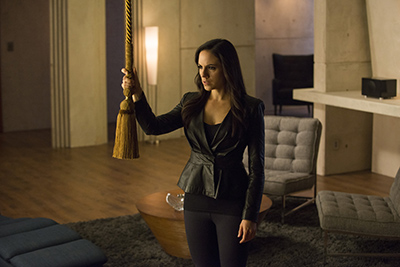 The love triangle between Bo and Dyson (Kris Holden-Ried) and Bo and Lauren (Zoie Palmer) is still a big part of the show. Will that still continue through the end?

The love triangle has been a part of the show from the very beginning. And I don't think any of us knew, even the writers and the producers, how impactful that triangle would be. It was meant to be a central part of the story, but I think they really focused on it when they realized the popularity and how much it affected people. And so the triangle is definitely going strong until the very end. But, you know, I always say that Lost Girl made bold choices and Bo makes bold choices, and I feel like that's definitely true within the love triangle, and that's pretty much all I can say. There are bold choices made, but also there's a longer story to be played out with that triangle I think. I like to think that fans are wondering where they are now, what they're doing, and where they'll be in ten years and twenty years, and all of that kind of stuff. But yes, it's definitely a theme right to the end.

Would it be safe to say that at the end of the series she doesn't make a definite choice? Can you say to that one way or the other?

Were you surprised where Bo ended up at the end of her journey?

No I was not really surprised...When I read the last episode, it was like I'd finished the greatest book I'd ever read. And was so satisfied with the last chapter and closed that script and just felt really good about where we ended up and it did conjure up thoughts of the future with these characters, and that's what I wanted.

You know, I always wanted Bo to realize her full power and her true potential and also realize that, you know, it's still going to be messy out there, but she's ready for it in a different way. She's really learned a lot and is ready, I think, for the next wave. I think at the beginning, she's blissfully unaware of a lot, and then she became too aware, too much, and you know now there's a lot - it's noisy. It's a noisy world, the Fae world. But she's ready for it. 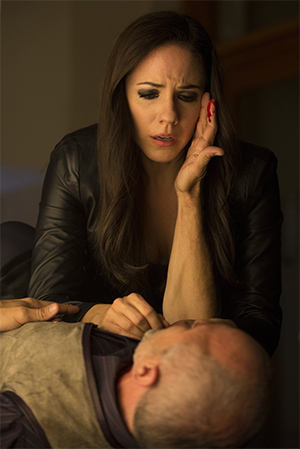 Do you know what's next for you? Do you plan to take on more roles right away, or take more time off after you have your baby?

Well, you know, I really took a concerted break. I wanted to take a break after Lost Girl. It was such a great journey, and such a great role, but it's a lot of work leading a show for five seasons. It's work in the best possible way, but I really wanted to take time to kind of clear my head and be with my son and have another child, so that's exactly what I did. And I'm very, very pregnant at the moment, but, you know, I love acting, and I love performing, and I love reading scripts, and I'm definitely at the place where I'm reading stuff and having meetings and talking about things for the future. So I don't know what that next role is yet, but hopefully I'll be able to confirm some things in the nearish future. But right now my goal is to have a healthy baby and spend some time with my family adjusting to that new edition.
Twitter
BotonSocial por: SocialEmpresa
Category: Interviews