Tonight season two of the popular series Bitten returns to Syfy with two all-new back-to-back episodes. Based on the best-selling book series Women of the Otherworld, by Kelley Armstrong, the series this season is in for some changes as witches are introduced into the mix. Star Laura Vandervoort, who plays werewolf Elena Michaels, recently talked to Jamie Ruby of SciFi Vision in an exclusive interview about what's to come this season.

Season two picks up where the previous left off with Elena still dealing with her fiancé Philip (Paul Greene)'s death. According to Vandervoort, fans will see a very different Elena this season. "This season picks up three days after our finale. Emotions run high and vengeance is all Elena can truly think about. She has not taken the time to mourn Philip. The true change in Elena this season is her seemingly acceptance of her fate. She does not apologize for her actions this season. There is no questioning who she is and what she has to do.

"The approach this season was really just being emotionally certain and all in. Season one, Elena was constantly torn between the two lives she was living. She constantly fought the animal within her, trying to suppress it. No more." 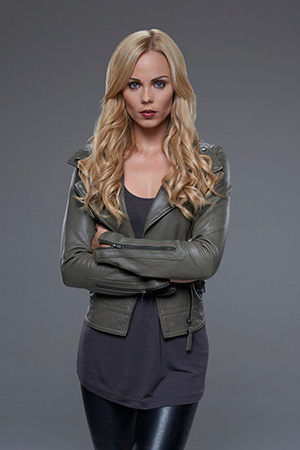 This is something that will of course affect Elena's relationship with Clay (Greyston Holt) this season. "Elena is emotionally disconnected from Clay as season two is under way, but not physically. She needs to release her anger and tension somehow right? (laughs)

"Without Philip in the picture, the audience would suspect Clay and Elena to live happily ever after and maybe they will, but things do block that path for them. Let’s face it, nothing in love comes easy. Throw in being the only female werewolf in existence and you have a recipe for blood and death, not roses and candlelight dates."

What would a normal date look like for Elena and Clay? She and her costar have joked about it before. "Greyston and I always joke around when we are in the middle of a crazy episode, covered in blood and sweat, that it would be nice to just see Clay and Elena go on a date, play cards, watch a movie."

They've talked about some other things that would be fun to see as well. "We joke about musical episodes of Bitten. The cast singing as they kill."

If the actress was able to write anything for Elena, it might be something like that. "Perhaps I would write a lighthearted comedy episode? (laughs) Everyone is just happy, birds on Elena's shoulder as she picks flowers at Stonehaven, rather than digging a grave." 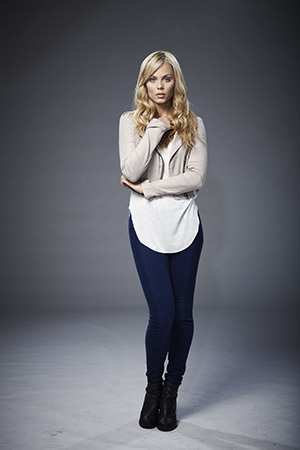 Vandervoort talked about the part of Elena that she connects with. "I connect with Elena's need to make things right, to make things better. She struggles with right and wrong at times especially season one. I always connect with her need to be equal, to be strong and take care of things on her own."

The biggest change this season is with the introduction of new supernatural beings: witches. The actress was surprised by the addition at first. "The addition of the witches was definitely a surprise, but a pleasant one, however. I knew eventually the witches would show up, but did not know which season.

"Having women on the show was a nice change for me. I think it was also a change to not have the pack working as closely together as a group. [There were] less of the family oriented moments, the warmhearted chats with Jeremy, the pack breakfasts, I felt like I missed that. However this season is so action-packed and has so many different storylines going, that it made sense; all we know, the warmth of Stonehaven, the comfort of family, was gone."

The witches will change the tone of the show this season as well as Elena's attitude. "The witches bring an entirely new aspect to the show, a supernatural world. Obstacles the pack cannot go up against with just sheer wolf strength and pack law. 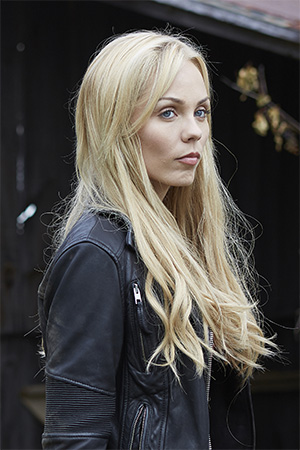 "Season two becomes a more mystical and dark world for the pack. They are another group of beings that know of their existence, which brings an abundance of trouble for them.

"Elena connects with a young witch and on many levels her motherly instincts definitely kick in. Momma wolf steps forward leaving scared Elena wolf in the dust."

Vandervoort enjoyed working with the new cast members. "It was wonderful. Having both the female presence on set and such talented women to work with made for an incredible season. It definitely throws the men in the pack for a 'tail' spin, if you will."

The show may be darker this year, but the actress is able to step away from that darkness. "There is no question that season two is emotionally and spiritually darker. There are times when it can be hard to shake the day off when you get home, or wash the blood off. (laughs) But for the most part, I always try to leave Elena on set. I feel very close to her so it is not always easy. 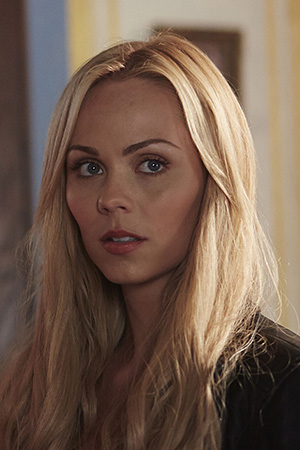 "In addition to all of that, once I am home, I am working on the scenes for the next day. I can never really separate myself from Elena until the season is done."

Vandervoort, however, enjoys that and the other ways she is challenged. "Our writers always know how to challenge me. We have a fantastic team. Elena, both physically and emotionally, challenged me this season, perhaps more than last."

The actress was only able to tease a bit about the more physical scenes coming up. "This season has several large stunt/fight sequences for all of us. Our stunt coordinator John Stead always amazes. I cannot get into some of the big fights, that would give away too much, but you can be sure this season packs a punch, bite, kick, growl and some occasional tongue and hair pulling."

Fans are really in for a ride. "All I can say is there are some unforgettable moments throughout the season, and some heart-wrenching losses."

Be sure to catch the season two premiere of Bitten, tonight on Syfy.
Twitter
BotonSocial por: SocialEmpresa
Category: Interviews