Exclusive Interview with Trenna Keating for Defiance
By Jamie Ruby

This season on Syfy's Defiance, Doc Meh Yewll, played by Trenna Keating, has been more integral to the story line. Spending the beginning episodes in Camp Reverie, the Indogene used her smarts to eventually get let out of the prison camp, and was instrumental in the release of Datak Tarr (Tony Curran) as well.

The actress recently sat down with Jamie Ruby of SciFi Vision in an exclusive interview to talk about the second season and what's in store for her character moving forward.

Some of the best and funniest scenes this season have been between Doc Yewll and Datak. The two had a lot of fun with it. "Doing the hand job scene, we were like two twelve year old giddy children. We laughed so much I thought, 'if they actually ever gave Tony and I a full on sex scene, I think the crew would absolutely hate us, because it would take a year and a half for us to film, because, for one thing, I don't think an Indogene and a Castithan could ever have a make-out scene, because with my black lips and his white face, the entire makeup team would lose their shit! (laughs) I don't think there's a strong possibility of them becoming lovers, but you know, the writers do surprise us. 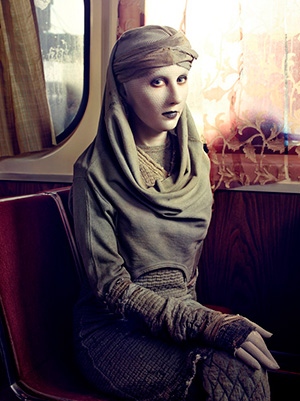 "...I think there's an element to Datak that he'll take it where he can get it, but I don't think he's going to get it from Doc; I think he pretty much knows that."

The actress's favorite line this season came from that scene. "I think my favorite this season probably was, "You want me to check you for lumps?" I think that that's probably the best one."

Keating talked about her character's motivation for working with Datak this season. "I think at this point in the season that she more has just recognized that she needs an ally. I don't think it's that she particularly likes Datak or trusts Datak necessarily, but I guess there is perhaps a little bit of a glimmer of maybe, I can trust this person, and I also might need some backup, because Doc recognizes that these two are both enemies to the E-Rep.

"And so coming out of prison, I think she kind of realizes that she might need somebody to watch her back, and her way of getting that, is getting him out of prison. So she kind of feels like, 'hey I own you; I did you a favor, so now do what I say.' She's a planner."

Will they be able to work together and get along? "It kind of goes down a different path; it's not like you see us side by side in my doctor's office. It doesn't really go down that path. It's more of the relationship between the two of them, to see how that develops, because Doc, she doesn't like anybody into her life. She doesn't like to feel vulnerable, and I think that Datak of all people is somebody that she kind of starts to let into her life.

"So in some ways, they're very much the cranky, bitter kind of married couple. [It] almost feels like that, but at least for Doc, I think she ends up sort of valuing him, which I think is something that makes her very uncomfortable, because she doesn't like to let anybody into her life. So we kind of see a little bit of Doc's vulnerability this season, which was nice to play, and I think nice that the writers started taking it in that direction."

The actress really enjoyed working with Curran. "I love working with Tony. I was thrilled when we started getting the season two scripts, because with Tony and Jaime [Murray], their characters I didn't cross paths with hardly at all in season one. And I just think Tony is a genius; I think he's hilarious, and he also just plays a bad guy so well. So I was really happy that we got so much to do together this year. And we have a lot of fun. He's well loved by everyone on the cast and crew, but he also is an absolute pro and he gets it done fast. There's nothing to say but good things about him." 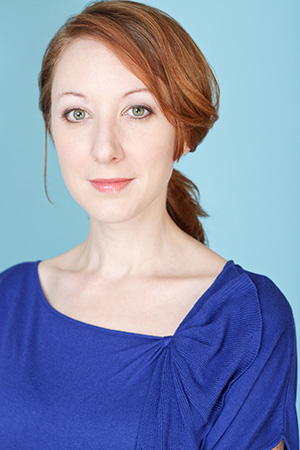 Keating would love to be able to have scenes with Datak's wife Stahma as well. "Last year I had a lot of time with Grant [Bowler] and Julie [Benz], and this year I'm more with Tony and Pottinger [James Murray] and some new characters that will come into the season a little bit later. I still haven't gotten to do my big Doc-Stahma scene, which I'm really hoping for in the future, because I don't know who would win. I mean, Doc never smiles; Stahma always smiles; I'm not sure which is creepier. (laughs) Yeah, I'm waiting for the Doc-Stahma scene."

The actress also talked a bit about Doc's interesting interactions with Pottinger this season, and what he has planned. "I can say that yes we are going to learn about what's on those papers, and what they're doing, and I think it's pretty exciting what they're doing. And I think that that's another interesting relationship, Pottinger and Doc, because it's one of those I things, I mean just from the scene that we've seen, he says, "Is it possible?" And she says, "Yes." And it kind of shows us that Doc gets sucked in when something interests her, whether it's for good or evil, and I won't tell you which one it's for."

Fans will get to see more of Doc Yewll's backstory yet this season as well, with some surprises. "They will be going into the backstory of Doc a little bit more...We do get to see kind of what makes her tick this year, and we see her in love, which is definitely something that you don't expect for Doc. So that kind of starts showing us a glimpse into where she comes from and how she ended up to be who she is today, which has been a big question for viewers and myself in season one, because you just don't know, you just think, 'why does she do these things?' So we start to get a little bit of an idea about what makes her tick."

Keating also talked about the challenges she still faced this season. "With season two I think it's great that we've all kind of settled into our characters and there's a certain level of confidence that comes with feeling like you're getting to know your character better and you're getting to know the other team players. So that's really fantastic.

"I still haven't had to do a ton of the alien language, so I've dodged that bullet.

"...I mean, with the vulnerability that we see with Doc, I actually found that a little bit difficult, because you get such an idea of how this character is and how hard she is, and then sometimes when you get given a script where it goes against all that you feel like you knew about your character, it becomes an acting challenge to figure out how does this type of person go there, because it's different than how Trenna would go there."

Sometimes the prosthetics that are Yewll's signature look can still be a source of some challenges as well. "I think sometimes watching and when I go into ADR things that I'm struggling with it's still mask related, but just being able to annunciate in that mask so I can speak clearly, because sometimes, as an actor, when I watch I'm like, 'oh all that training and voice work, and I can't understand what I'm saying.' (laughs) So I find that a challenge. 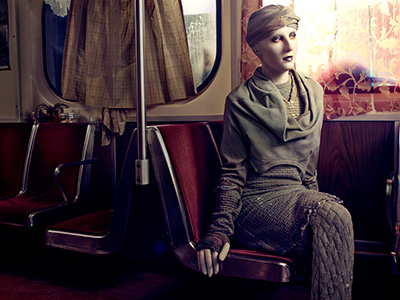 "...It's totally different. The mask, it holds my mouth in like such a constricted way, and that drops my voice. Like even when I go in to do ADR and I'm watching, and I'm like, yeah, my voice is lower when I am Doc than how I normally speak."

Keating's prosthetics take just as long this season, but the look has improved since the beginning of the show. "I can tell, and I'm sure viewers can tell too, that the makeup - the prosthetic - has come a long way since the pilot episode. I feel like it just keeps getting better and better the more Shane [Zander], who does my prosthetic, the more he does it, the better it is. And the process is still just as long, 2-3 hours depending on the day, and it's still the same mask. Like somebody said the other day, "It looks just like makeup now; it doesn't look like a mask." Which I think just speaks to their talents; it seems like it's getting closer to the face, and I feel like you can see more of me through it now than you could before. There's really not much to say other than they just keep getting better at it."

Outside of her work on the show, the actress talked about what she likes to watch and read. "I'm not a huge into sci-fi. I loved Firefly; I was a big Firefly fan...But as far as like Star Trek and Doctor Who, that's a train I haven't jumped on yet. My kind of shows are The Killing and Breaking Bad and The Fall and Luther, those kind of things.

"...And for books I used to read Ramond Feist books a lot."

"...I'm a huge Harry Potter fan...I was a bigger fan of the books than the movies, as usually you are, it's not that I don't like the movies, I think that they did a fantastic job with them, but still when I think of Harry Potter, I kind of think to the experience of reading the books more than watching the movies."