Exclusive: Grant Bowler On the Set of Defiance

Exclusive Interview with Grant Bowler on the Set of Defiance in Toronto on August 22, 2013.
By Jamie Ruby

In August, at the beginning of filming for the second season of Defiance, SciFi Vision was lucky enough to get to visit the set and learn a bit about the upcoming season.

During that visit, Grant Bowler, who stars as Nolan, sat down with the site for an exclusive interview.

At the beginning of the season, Nolan is no longer the lawkeeper, so what will bring him back to the town? "I think the tricky thing in season two actually is getting him back to Defiance. I mean that's the first thing for me that's the trickiest thing, because my first question was when Kevin [Murphy] wrote him busting out of Defiance, "How are you going to get him back?" Because he's not really a guy with a reverse gear, so we've solved that; there is something that brings him back to Defiance." 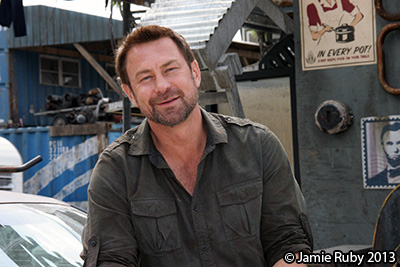 Things are much different in the town now that the power has shifted. "Nothing's the same with the E-Rep in town, and you know, he's got probably more experience with the Earth Republic than most, because he was a member of the military for a long, long time. It's a very long history; he knows it inside out; he knows how they operate and how they work. He knows all the good parts of them, as well as all the bad parts of them, so he knows their system, I guess is what I'm saying. And Defiance won't be the same as long as they're in town."

Nolan wasn't happy when Datak (Tony Curran) was going to be in charge of the town, however, the E-Rep being in charge is even more intolerable to him. "Datak's got that terrible flaw. It's like all Shakespearean characters - hubris, pride is Datak's undoing. So Nolan knows he can always move to that and bring him down; it's pretty easy to undo Datak. And I think Datak's journey in season two is going to be largely about figuring out his own limitations. His own limitations are what have brought him low, not anybody else. Everybody else in our cast has been acted upon, if you like, by events in the world. Datak and Datak alone has brought about Datak's downfall. So that's probably going to be Datak's journey.

"But for my guy, yeah it's the E-Rep, because they're the devil he knows really, really well, and I think when he got invested in Defiance, it was pretty much because it was the one place that he had found that was free of that kind of systemic, hyper organized, slightly fascist government. And he was really digging on that, and when the E-Rep come to town, the party ends." 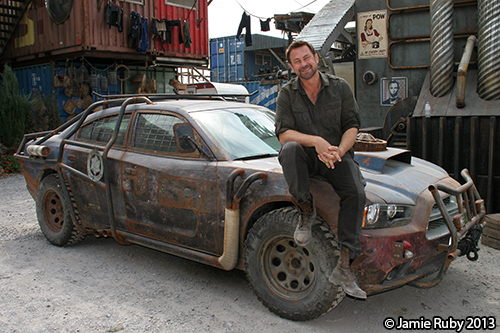 Last season Nolan had a scuffle with Curran, which both actors enjoyed. "I'd been fighting all season; I'm either fighting or I'm upstairs in the NeedWant. He had a ball; God he loved that scene. He's been saying ever since, "When are we doing the next one? When are we going to be scuffling again?" I had a ball; it was a great fight. I think it was actually the best fight we did all year, and he was a champ, you know, he got in there and gave me a run for my money, which is a lot of fun when that happens. So hopefully it will be like the Ali-Frazier trilogy. We do one a season and the winner changes every year. But that's how it should happen."

With all the changes this season, Bowler talked about how Nolan and Irisa's relationship is going to evolve this year. "I think that's a constant evolution, and that's a struggle we continue to have. You know, season one we got right into that, into the struggle of father and daughter. And it was very much that struggle that a father and an adolescent daughter, if you like, have, where she was just grumpy and wouldn't listen to anything, good or bad in season one. 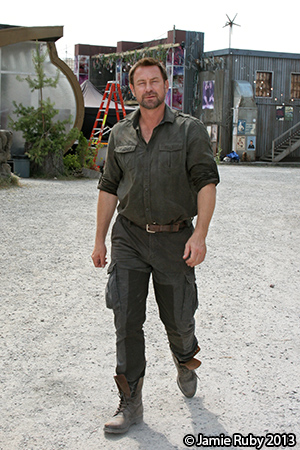 "And of course that's when the shoe goes on the other foot in a lot of ways in that relationship. We all remember, we all know that phase of growing up, where we're demanding to be treated with some form of equality. And then of course the most terrifying thing that can happen is when we start getting treated like adults, and we've got no idea what we're doing. That's where she's at, and I think that's where he's at as a father. So it's moved again, and it's shifted again. And it's great. It's actually a little more dynamic, I find for me, so it's even more fun to play, because it's more of an interplay between them. It's less one sided - him pushing at her and her kind of holding back."

The actor also teased a bit about Nolan and Amanda. "There was a little bit of unresolved sexual tension there throughout the [first] season between him and Amanda but...this season he's a busier boy. And yeah, there's some sparks there with Amanda and possibly more than just that."

"So visually, Tom Burstyn and the electric guys are talking about where they ended last season and where they want to go from there. So what I'm excited about, is we got so much of our original crew back. We got our entire creative [team] back, that we can literally just leapfrog forward in the next thing we want to do, into the next step we want to take. And visually in particular, Defiance is going to be much more venturous than it was in season one."

Speaking of visuals, the backlot of Defiance is quite massive. Bowler talked about his favorite areas of the set. "The NeedWant's the prettiest set I think, in fact I think the NeedWant is one of the prettiest sets I've ever seen. The whole set lit by this incredible tree is amazing. And everybody who comes in here for the first time goes, "Oh my God; oh my God this is beautiful." This is definitely the prettiest.

"My favorite set of course is the Lawkeeper's. Because, you know, it's like home to me, and that's where I spend a lot of my time. And we're out there today filming, and so I've been banging in and out of there, but it's not mine [now]; it's not mine. So that's odd; that's different. But no, I love that set."

You can catch Bowler Thursday nights on Defiance on Syfy.

Stay tuned for more coverage and dont forget to check out the rest of the exclusive photos from the set visit!
Twitter
BotonSocial por: SocialEmpresa
Category: Interviews