Recently TNT premiered season four of Falling Skies. Tom (Noah Wyle) and Anne (Moon Bloodgood)'s alien-human hybrid daughter, Lexi, has continued to grow at an abnormal rate, reaching young adulthood, as well as gained some interesting abilities. Scarlett Byrne, who joined the cast as Lexi this season, talked to Jamie Ruby in an exclusive interview about her work on the series.

Byrne originally auditioned for the role on tape. "I auditioned for it last year, I think around August time. I put myself on tape in one of my best friend's bedroom. And then I got a call, and I had a Skype meeting with Greg Beeman. And then I redid the tape in more of a studio setting, and then I found out I got the call. So it all happened in two weeks, and suddenly I was traveling to Vancouver and started shooting the show. So it was a bit [of a] whirlwind; it was fun." 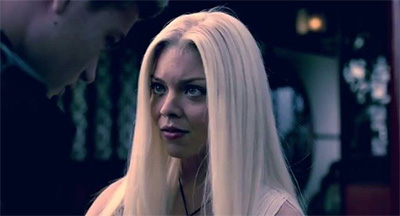 The actress was in love with the character right away. "First, with Lexi, she really isn't one dimensional, you know, she's anything but straight forward. She's very complex, and she's so interesting; she really is cool. I mean, there really isn't another word to explain her, and as an actress I couldn't feel more privileged to be playing her. She's just very interesting, and technically she's this child, like this baby, but the next time we see her she's this full grown young woman, and that at the start was such a selling point. She has this hair and everything, you know, these powers, and I was so excited and just so happy and over the moon that I got the part."

The complex nature of the role and gaining more experience have been her favorite parts of working on the series so far. "My favorite part [is], I feel so grateful to be playing a character like Lexi; she is so different. I mean, I really can't think of anyone else or any other character on TV who is really like her, so that's definitely the first thing.

"The second thing was learning more as an actress, having more experience working with TV, and the people I got to work with. Everyone I got to work with was just so welcoming. But again, the fact that I get to play this hybrid alien-human was definitely a highlight. It was just so much fun. Like I said, she's very, very cool."

Byrne had an easy time fitting in with the already established cast. "For a start, they've been so welcoming, I really couldn't ask for a more supportive cast, and crew as well. I mean, they really are like a family. And at first I was nervous joining them, because really, the only way I can explain it, is it's like moving to a new school.

"...But like I said, everyone was so supportive. At the beginning of the season, you see that I work a lot with Connor (Jessup), Seychelle (Gabriel), and Sarah (Carter), and it was just so much fun working with Moon and Noah especially, you know, it was really great; I really did learn a lot from them. And like I said, everyone was really like a family; I felt definitely a part of the Falling Skies family." 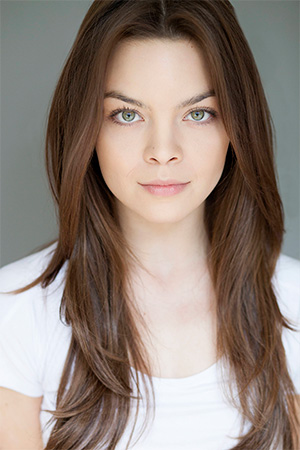 The actress did not base the role of Lexi on anyone; she made it her own. "Not really [anyone] in particular. I mean, like I said, she really isn't one dimensional. It was nice to hear what the other actors thought about her, and I know that a lot of people were trying to put their own input into how they thought that she should be, or should have been, but I just think when I first got her and I was trying to understand her, I just kind of grew with her. I know that sounds silly, but I can't really explain it in any other way. Every two weeks I was learning something more about her. I wouldn't say I took anything from anyone, I kind of just did what I felt was the right thing."

The schedule was different than what she is used to and what she found the most challenging. "For me, this is my first time working on American TV show, and the schedule is very quick, you know, it's not like working on a feature film where you know exactly what's going on, [and] you have the whole script and you have however long to do it in.

"With this show, every two weeks we get a new script. I was finding more and more information out about her, and I'll be honest, in the beginning, she is so complex as a character, I from the very beginning didn't fully understand her. That was definitely was a challenge in the beginning, but it really did paid off towards the end, because I felt a sense that I had grown with her, and I'd really understood her, and that was a fun experience.

"Like I said, for me, it was a good experience working on this and realizing how quickly TV moves compared to working on a movie.

"And also the weather. Thankfully for me I didn't get it as hard as some of the others, but the schedule and the weather were definitely the hard parts."

Byrne did get to work with green screen for the series, but couldn't reveal much. "I can't give too much away...I've had experience in the past working with green screen before, so it wasn't too much of a shock, but the work on the show in general it was really fun, and the visual effects from are show are great...and I think everything looks great. And I'm really excited, but yes, I did, I worked with the green screen and the aliens, and that was an experience. It was fun."

The actress is looking forward to seeing people's reactions to her character on social media. "I do have twitter, and I'm anxious, but at the same time very excited, to see what the fans think of her, and I know there's a lot of mystery behind her, and I think people want to get some answers to some questions that they have about her. So yeah, I'm definitely, really excited to see what people have to say about her. I just hope they like her as much as I've enjoyed playing her."