Exclusive: On the Set of Warehouse 13 - Jack Kenny

Monday Syfy's popular series Warehouse 13 comes to a close. In August the executive producer, Jack Kenny, talked to SciFi Vision during a set visit about the final season.

Kenny talked about some of the things that have been stuffed into the final six episodes. "There're like a thousand new things. Pete (Eddie McClintock), Myka (Joanne Kelly), and Artie (Saul Rubinek) fall into a telenovela, and they all speak Spanish. [We have] Anthony Head as Paracelsus; we see Hugo (Rene Auberjonois) and Vanessa (Lindsay Wagner) again. Pete and Steve (Aaron Ashmore) end up at a Renaissance fair. We meet Claudia (Allison Scagliotti)'s sister (Cryssie Whitehead) and help her.

"And then there's one final big threat to the warehouse, one last hurrah, where somebody comes at us in a bad way. We have a surprising big bad...We discover him in episode one in an alternate universe; it's very interesting. And then the finale, which is six episodes rolled into one." 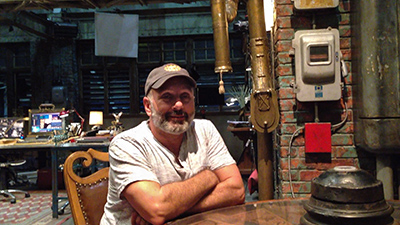 There is even more stuffed into the season finale, including a musical number. "There's a musical element in the finale. The finale is basically a clip show of clips you've never seen, so it's every agent reliving their defining moment with the warehouse. And we see Claudia's defining moment and it's part of an artifact that has affected them all and is making everyone tap dance."

They may not have gotten to do everything they wanted with the time that they had left, but they did what he felt was most important. "We don't lay heavily on themes. I mean honestly if we had thirteen or twenty we would have dealt with Myka's post cancer; we would have dealt with a deeper threat to the warehouse; we would have dealt with more of a season arc of things. But when you have six episodes, and you're ending a series, we didn't want to go dark. We didn't want to get into deep, heavy, serious stuff. It's a little [dark], I mean we find out about Claudia's sister, you know, and there's some danger there in her past and why she's an incredibly dangerous woman. So we had to get into all that. But it's way more a celebration; it's way more a love letter to the fans; it's way more just a fun little roller coaster summer ride for our fans and the people who've loved the show."

Kenny will miss working on the series. "My answer is like Pete's answer in the finale is, the defining moment each agent has with the warehouse, and Pete's is kind of everything that's ever happened here at the warehouse. And that's kind of like I can't do a miss most...I love everything about this experience. I love the show; I love the crew; I love the cast; I love the writers; I love working with all these people on a daily basis; we all get along. There's a tremendous amount of mutual respect for each other. I think it's great. I'll miss all of it."

Be sure to watch the finale tomorrow, and come back after it airs to see another clip from this interview, talking about a specific scene in the finale.
Twitter
BotonSocial por: SocialEmpresa
Category: Interviews