Exclusive: On the Set of Warehouse 13 - Eddie McClintock

In August, SciFi Vision had the opportunity to visit the Warehouse 13 set and talk to the stars of the show. Eddie McClintock, who plays Pete Lattimer, sat down with SciFi Vision for an exclusive interview about the final season.

There is quite a bit coming up this year jammed into the final six episodes. Episode four is called "Savage Seduction." "Pete and Artie and Myka get trapped in a telenovela, so we had to take Spanish lessons for about two months so that I could speak Spanish fluently for that episode." 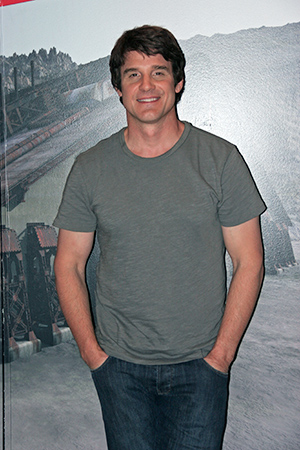 The actor's defining moment for the series came after that episode. "The memory that I think I've marked as the defining moment for me on Warehouse 13 is at the end of the telenovela episode. The telenovela episode was a lot of work; it was really a lot of hard work mentally to learn all of the Spanish, and I had to learn twice as much Spanish as everybody, and I had to speak it fluently.

"But it's such great high comedy, which I'm really a fan of. You know, Carol Burnett, Harvey Korman, Tim Conway, Abbott and Costello, [and Mel Brooks], and Jack [Kenny] is too. And so when we finished, we both kind of looked at each other, and just for me, I just was proud to be able to share that experience with Jack, someone who has just been there for me for the last five years. I mean, he's worn many hats; he's a hell of a guy, and I'm proud to have worked with him, and I think it's something that fans will be able to enjoy for a long time after we're off doing whatever else we're going to do."

Another great thing this season is the musical number in the series finale that McClintock was a part of. "I've been taking tap dance classes, because we're going to do a little 42nd Street."

Fans of the show will love the season. "You know, it's more of what you've come to expect from the show: lots of Pete silliness and a deepening of the relationships and a great ending to the show. [It's] a great way to end the show. It's not trite or predictable."

McClintock only teased about how Pete and Myka (Joanne Kelly)'s relationship would develop over the season. "I can say one thing: Pyka." However, the actor has been saying that for a long time so fans will have to watch the show and see for themselves. 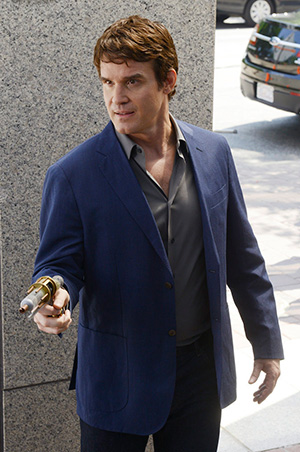 Both Pete and McClintock's lives have changed from the beginning of Warehouse 13. "As much as Pete has made his journey, I've kind of made the [journey with him]. I had a two year old and a one year old when I started, and now my boys are, you know, boys now instead of babies. I've learned a lot; I think I've become a better actor; I've been forced to become a better actor. I think I've become, I hope, a better person.

"I think you're forced to deal with a lot of personalities in this job, and I think you either become tolerant of other people and you learn to love them for who they are, or you implode and walk away from the experience with a bad taste in your mouth.

"And I think the same can be said for Pete: his journey, who he was at the beginning. I think he was kind of a lost soul before he came to the warehouse, and he found his family. And the warehouse is part of that, the warehouse itself. It was his personal toy box."

McClintock will miss the people he's met during his journey. "You know, I've spent more time with these people in the past five years than I've spent with my own family. Last year I was here for nine months - fifteen hours a day, nine days a week, for nine months. So you create strong bonds.

"...I'll miss my friends here...It's such a great crew here. We've just had so much fun, and I have new friends across the country. So if I ever come to Toronto I know that I have people who will take care of me, because they're my friends."


Stay tuned for more Warehouse 13 interviews and coverage and don't forget to check out the rest of the exclusive photos from the set visit!
Twitter
BotonSocial por: SocialEmpresa
Category: Interviews