Exclusive: On the Set of Warehouse 13 - Allison Scagliotti

In August SciFi Vision had the amazing opportunity to visit the Warehouse 13 set in Toronto during filming of the season finale.

Allison Scagliotti, who plays Claudia Donovan on the popular Syfy series, talked to SciFi Vision in an exclusive interview.

Scagliotti talked about some of the things crammed into the final season. "What I love about Warehouse 13 [is] the amps turned up to eleven. We have a crazy telenovela episode that's half in Spanish. We deal with Paracelsus (Anthony Head), and I don't want to spoil that too much, because that's a really exciting and kind of Buffyesque kind of moment. For Claudia, we finally get to learn what happened to her family, and we meet her sister (Chryssie Whitehead) who Claudia was not aware was still alive. So Claudia and Artie (Saul Rubinek) have to sort of deal with how that changes their relationship; he was keeping it from her, and what she has to learn from the situation, which is that some things in life you can't fix." 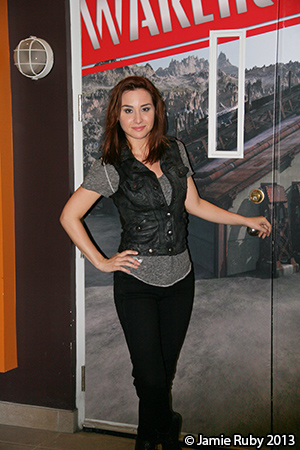 The actress really enjoyed the season finale as well, even if it has come all too quickly. "These two and a half months have gone by so quickly, because it's half the size of a normal season, but I've had a blast from top to bottom. And at the time of this interview we're only a few days into shooting the finale, and it's my favorite episode of the entire series. I can't say it enough. I love it. I love it so much."

The episode includes the long-awaited musical number, which Scagliotti was very excited for. "I don't want to spoil it too much, but what I can say is that it's going to be sensational, particularly because Jack Kenny is bringing his particular brand of Vaudevillian style to the scene, and I have been working for months on this tap number, and I mean this week I've been in rehearsal almost every day, and I could not be more excited about it. It's going to be so over the top and Broadway fabulous. I saw the set today and it took my breath away."

If they had had more time, the actress has thought of an artifact she would have loved to have seen. "Early in season one, Saul and I came up with the idea that Dorthy's red shoes from The Wizard of Oz were an artifact, and it might be interesting to sort of go back into Claudia's days in the asylum. And she sort of has to - no place like home; she's got to somehow find her way out of the dark days of being institutionalized. But you know, it was a half-baked idea, but...it's interesting.

"But we got to explore that in other ways, and we didn't have to hang a lantern on the fact Claudia struggled with being wrongfully committed. But it's nice to have a character like that on TV who has that in her past, and it's part of her, but she doesn't walk around with it sort of perched on her shoulder like a parrot." 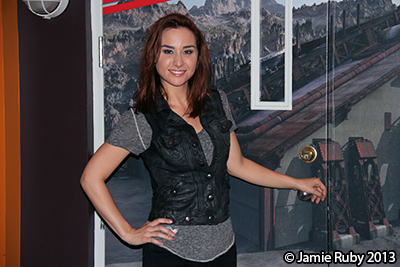 Scagliotti also talked about the possibility of Claudia becoming caretaker of the warehouse by the end of the series. "I'm twenty-two; Claudia's twenty-two; I know a lot of people at twenty-two didn't know exactly what they wanted to do with their lives. And I certainly have gone through that same conflict over and over again. Like any young person, she's kind of going "Well wait, what if I want to do this?" And she's realizing she loves being an agent and being part of the team, and becoming caretaker is really shrouded in mystery. I mean, if you think about it there's more that we don't know about Mrs. Frederic (C.C.H. Pounder) than we actually know. Except we know that she's a lot older than what she looks, and that's kind of scary for someone like Claudia who has had such an abnormal youth and experience. But you know, doubts are just doubts, and they're just thoughts and part of the process of growing up. I mean, I think it's necessary for Claudia to have her second thoughts, but you know life is long, and you never know what you're going to see in the last scene of the finale." 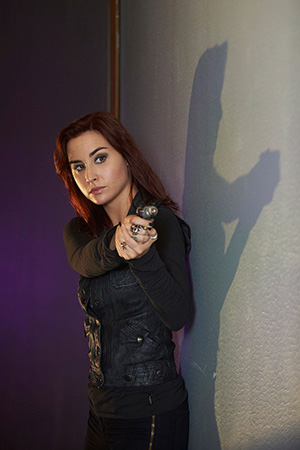 Would she make a good caretaker? "Oh, yeah. I mean it's so hard to speculate, because again, you know, what is a caretaker? It's so mysterious and ethereal but, yeah, I think once Claudia really grows up and comes into her own, she's meant to be caretaker."

The actors are all taking props from the set as souvenirs. "I am taking home Sylvia Plath's typewriter, because I'm moving into a new apartment, and I want that thing on my desk. It's mine. Success!

"Aaron (Ashmore) and I were initially going to fight over the metronome, because I thought, "I'm a musician; I'll use the metronome; it's so special to me," and then I found out at Comic-Con that Aaron wanted it too, and neither of us knew that the other was interested in it, and we had a total stalemate.

"And then I got back to Toronto and I thought about it and I was like, "Of course he needs the metronome; that's his artifact." I mean, it's what brought him back into the show. So I told him the other day, I was like, "Hey man, the metronome is yours." And he got all maudlin about it, because Aaron's so sweet. So I gave up the metronome very nobly for Mr. Ashmore. But I'm getting a sweet typewriter out of the deal."


Stay tuned for more Warehouse 13 interviews and coverage and don't forget to check out the rest of the exclusive photos from the set visit!
Twitter
BotonSocial por: SocialEmpresa
Category: Interviews