The second set of round table interviews at the Defiance press room during the Fan Expo in Toronto was with Dewshane Williams, who plays Tommy, and Julie Benz, who plays Amanda Rosewater. The actors were able to reveal a bit about the new season during the interviews, which include very slight spoilers.

Here are some of the highlights and exclusive photos, and you can of course watch a partial video of the interview below. 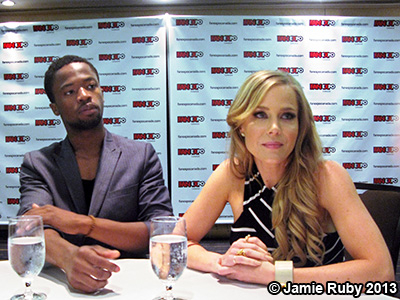 Don't forget to check the gallery for more great exclusive photos from the photo call as well as the round tables for Defiance.

On the level of confidence of season two versus season one -

Julie: Well, it's a double edged sword, because with season one there's always a lot of nerves about like are people going to be watching this? Is this something that fans are going to like? And you just don't know, and you have a lot of these what if questions. But with season two, now we actually have a standard to keep up and actually make even more exciting and more dynamic. So even though some of the first day of school jitters have kind of fallen away - I can relate it to like when you're a freshman in high school and you're starting out, and you're really nervous, but then you go back for your sophomore year and you want to be better. It's that kind of feeling.

Dewshane: Exactly the same. I agree. We're just trying to make the second season even more compelling than the first. The first went pretty well; the audience seems to be pretty receptive.

Dewshane: I've been told that this is one of those things where you have to come out to really get the energy, to see how passionate these people are. I've realized that we have some of the most passionate fans, and I'm very happy about that, because they'll make the full costume to the T, almost better than the original, and I think it shows a lot of dedication, and that's really nice to see.

Julie: It's great, you know, I had the same experience when I was on Buffy and Angel where you have fans who are just as passionate about the show as we are making it, and it really helps fuel our passion, having that synergy with fans. And that's why coming to Toronto Fan Expo is so important, for us to see that it exists, not just in a small community, but on a global scale. And that people from all around the world come together to talk about the show, bond over it. It's so great to see teenagers come up and say, "I watch the show with my parents." You know, how many shows can you actually watch with your parents and both sides are going to like it?

About what fans can expect moving forward - 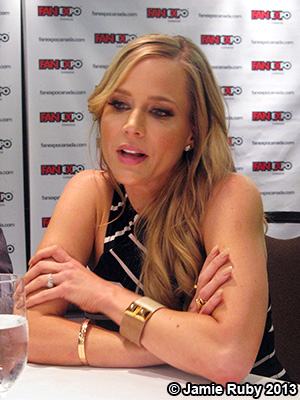 Julie: You know, Amanda's lost her job, her ex-husband died, her sister's disappeared...and she's starting in a very, very dark place. And let's think about it for a minute. She's unemployed, and she's lost everything.

Julie: Scotch has become her friend.

Dewshane: Pretty much all the characters are just tipped upside-down. It's like a big restart button on the second season because there's been so much that has happened to each and every single one of the cast members. And then we throw in a few new cast members. And they also upset the establishment, so to speak.

Julie: We have the new mayor, Niles Pottinger.

Dewshane: So everything becomes darker I find this season.

Julie: I think the second season starts in a lot darker place.

On Amanda's new journey in Defiance -

Julie: One of her big struggles is where does she fit in Defiance? I mean, she doesn't fit in with the E-Rep obviously; that's the big monster she's been fighting against, and now they've occupied the town. There's a great line that I think I can say without giving away any spoilers, she says, "I know what it's like to have power and I know what it's like to not have power. Having it's better." And it's kind of her motto in many ways, like she's lost everything. She doesn't know where she fits in in the town of Defiance. Who knows what keeps her there.

On how the cast is multicultural and on working in Toronto -

...I love Toronto, and I think for all of us it's great to be on a show where the cast is so multicultural as well, because I think it adds weight to it, just by having like Jaime's from England, and Tony's from Scotland, and Grant's from Australia, and Stephanie's from...

Dewshane: There's an authenticity about it.

Julie: And shooting in Toronto, Toronto's one of my favorite cities...

Will Amanda be leaning on Nolan for support? -

Julie: [Nolan]'s gone too. At the end of season one he's gone; he's off looking for his daughter. So Amanda's leaning on her bottle of Scotch. No, she really doesn't have a good support team around her; she's pretty much on her own.

On there being so many strong female characters in Defiance - 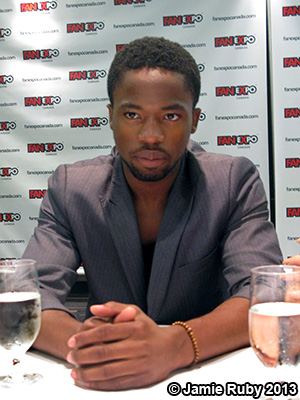 Dewshane: Love it. Love it; it's fantastic to see the characters, like not just women, but all the characters are very strong. There are no pushovers on the show. Which I feel adds like a richness to the women that are playing these parts. As opposed to being like a stereotypical, supporting role in the town, the women really run the town...

Julie: All the women run the set!

Dewshane: We don't really, I don't really have a problem with it, just because I think these characters they really add a lot to the town. And without their strenth, I don't think the town would be the same.

Julie: He's afraid of us in real life.

Julie Benz also gave her thoughts on the end of Dexter.