Bones returns to Fox for season eight starting September 17th with all new episodes. The premiere episode, "The Future in the Past," picks up three months after it left off - Temperance Brennan (Emily Deschanel) is still on the run, a murder suspect staying out of sight. After the real murderer, Christopher Pelant (Andrew Leeds), digitally created evidence of her guilt, there seemed to be no way out. Meanwhile Special Agent Seeley Booth (David Boreanaz) and the rest of the team must do everything in their power to find the proof of his misdeeds to clear her name.

The creator and executive producer of Bones talked to Jamie Ruby in an exclusive interview for SciFi Vision, expanding on what was said in the conference call earlier in the day. 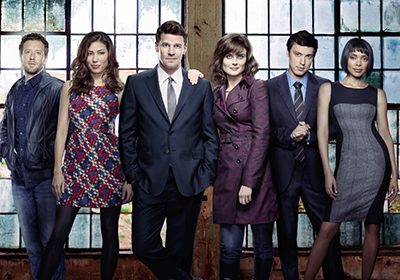 Starting the story three months later worked out well. "Brennan was gone from the series just about the same amount of time as the audience was gone. The symmetry appealed to us."

Regardless of when or if Brennan will be cleared of all wrongdoing, Pelant will continue to be a thorn in the Jeffersonian's side throughout the season and affect the team, even if not in a direct way. "The Pelant stories will not be referenced in every episode. I think he's a more haunting figure...he affects their interpersonal relationships but we don't address the Pelant stories except in those episodes which feature him. We just aren't that serialized."

Max Keenan (Ryan O'Neal), Brennan's father, is not happy about it. "Max is the ultimate pragmatist. If Pelant threatens his daughter and granddaughter, he'll kill him -- if he can get away with it."

Another character affected by everything going on is Cam (Tamara Taylor), who is more willing to bend the rules and help Brennan this time. "Cam has "plausible deniability" in that she had the sense to leave the Jeffersonian -- and take Clark with her. She's on shaky legal ground but TECHNICALLY speaking she's in the clear."

Hanson also revealed that Cam has a love interest coming up this season, but wouldn't tell who. "It is fiercely romantic. Poetic. Cam deserves some of the good stuff."

Another character that fans often as about is Lance Sweets (John Francis Daley). He will continue to have an important role in the cases. His girlfriend Daisy (Carla Gallo) will also be returning this season. "I'm not sure Sweets could be any more active in investigations than he is without becoming the star of the show! We are using him more as a trained interrogator. And we have no plans to lose Daisy as a character."

The other character that Hanson spoke about was Baby Christine. Although Brennan and Booth's new family is important, it won't be at the forefront all the time. "We have no plans to turn Bones into a domestic drama. Christine is a factor but not a real story focus."

[quote]We have no plans to turn Bones into a domestic drama.[/quote]
As for new characters, they have some ideas, but they are just that for now. "We have a couple of ideas for new squinterns but haven't knuckled down and created them out of full cloth. I can tell you that we have an idea for an assistant/trainee with Angela and we have a very specific actor in mind for that role -- but as far as the world will know, whoever we cast will be that person we had in mind right from the beginning."

The eighth season contains episode 150, for which they wanted to do something different. It is unique in that it is filmed from the victim's point of view; however the idea has been there for a while. "The pov episode is something I've wanted to do since the beginning. I saw a movie YEARS ago called 84 Charlie MoPic which was all told from the point of view of a young soldier in Vietnam looking through a lens. We never saw him until the very end of the movie and it stuck with me. I just had to sit down and write it." 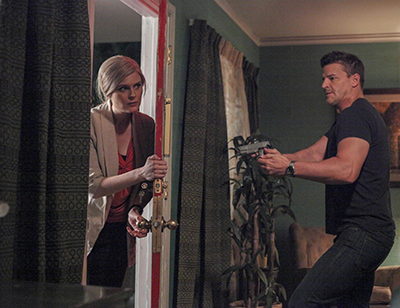 Hanson revealed earlier in the day during the conference that the episode will be melancholy as it is from a child's point of view.

Bones may be based on Kathy Reich's book series, but the stories are original unless she writes specifically for them. "We might be able to get another script out of her this season but the slots are filling up pretty quickly. We don't take anything from the books; we never have."

Many fans of Bones were also fans of the spin-off The Finder, so I couldn't help but ask if there would be a possibility of Walter crossing back over onto Bones. "Well, I was hoping to have Walter and Leo on Bones -- but as you know, our friend Michael Clarke Duncan passed away so that's not going to happen. We hope to have Geoff Stults (Walter) on the show but to be frank the stuffing got knocked out of us with MCD's death and we're going to sit on that sadness for a bit before moving on." Michael Clarke Duncan was a fine actor and will be greatly missed by the fans.

In closing, I asked Hanson who his favorite character was to write for and why, but he won't reveal that, with good reason. "As a show runner, I'd be insane to pick a favorite. How would you like to go into work one day and be glared at by half a dozen jilted actors and one smarty-pants?"