On September 10 at 11 AM, fans of the show, The Voice, got the chance to try a new, virtual reality experience. The Voice 360: Be The Coach offered the possibility to get the experience of being a coach on The Voice using the Oculus Rift. 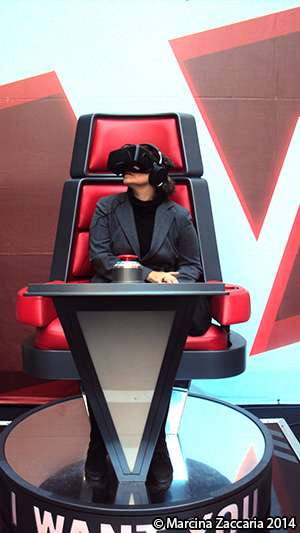 The event was held at 1271 Avenue of the Americas at a spacious square, located across from Radio City Music Hall. I don't usually test virtually reality technology, so sitting in the spinning red chairs with the viewing screen and headset was an interesting experience.

With the Oculus Rift, viewers get a panoramic look around the stage where The Voice is taped. Hosts of The Voice could be seen through the viewing device. On the screen, Blake Shelton hosts the event, and Pharrell Williams, Gwen Stefani, and Adam Levine give their opinion on a contestant's performance. According to Mashable, the technology was originally developed for gaming. It's a bit clunky, but a great way to see what's new on this season of The Voice.

The Voice begins its seventh season this year. New coaches Gwen Stefani and Pharrell Williams will be joining the show. The Voice will premiere on September 22nd.