Back in October, the digital press was given access to the set of Being Human as part of the Digital Press Tour, and SciFi Vision took part. Day Two of the Syfy Digital Press Tour started with a bus ride to the set of Being Human. We first were given a catered breakfast in a room that was surrounded by props and practical effects and prosthetics. We were given time to walk around and look at them all and take photos. They were all very detailed. 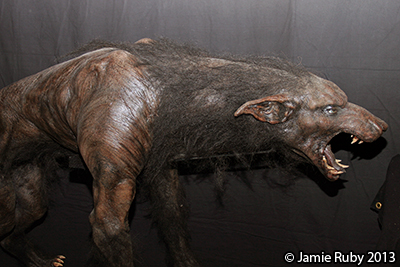 Some things included some molds for the actors, some pieces that would be added to an actor's skin, as well as some pregnant bellies and two silicone babies. I also really enjoyed the severed vampire heads. Some other cool things were the "dead body" of Sally, part of Ray, and a werewolf. There were also production photos around the room on the tables.

Next was the set tour, which was led by Executive Producer Anna Fricke and Production Designer Zoe Sakellaropoulo. 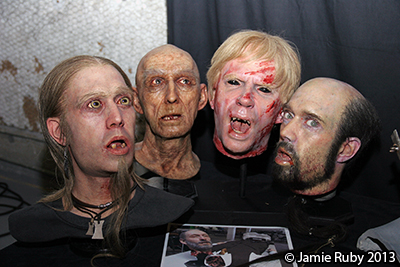 First we entered the apartment that is integral to the series. There was a recreation of part of the façade that included the front entrance into the space. There was also a wall that could be shot against that included a bike as part of the backdrop. The only thing else that was part of the "outside," was a huge photo of apartments that I can only assume from other sets is what they use when they shoot from inside the house through the front door.

The apartment contains a lot of furniture and knickknacks that I never really noticed on the show before. One of the things that really stood out to me, however, was how the walls and furniture have been "aged" and dirtied. You can see how they use paint effects to make the walls and such look grungy. 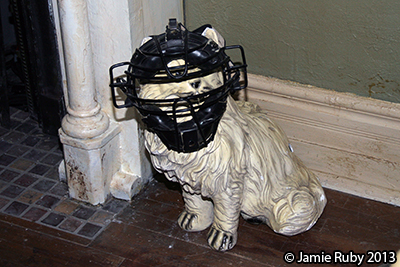 The living room is probably what fans think of the most when they think of the apartment, at least I do. However, when we visited, there was a lot of red that has been incorporated in the room for changes this season. I tried to get photos of all the different corners of the room showing the different props, and of course I couldn't forget to get a shot of Dog, the Cat-Man Dude. 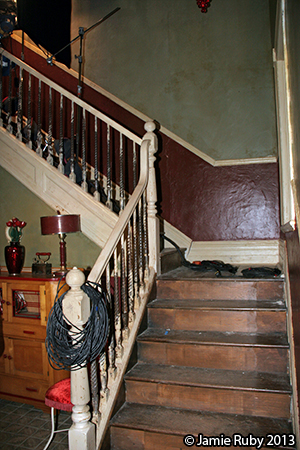 Another important feature of course is the staircase, where Sally was originally killed. Also of note was a decorative bunch of red grapes hanging above the landing.

Next was the kitchen, which I noticed was especially grunged up. The red theme continues through this room as well. There was also a binder that said The House Hospital on the front on the table from production.

We were also taken into what they called the secret or hidden room. It had crayon drawings on the wall paper. We went through the closet and into Josh and Nora's bedroom.

In their room there were some things in there they said might be a clue to things to come. They didn't specify what. 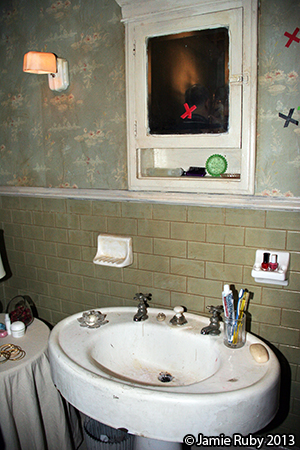 Next was the bathroom, which has been shown in the show before.

The last room we saw was Aiden's bedroom.

After the guided tour of the apartment, we sat down for a presentation by Key Special Effects Make Up Artist Erik Gosselin, who talked about some of the molds and prosthetic pieces that were around the room.

VFX Producer Jonathan Legris was up next. He talked about the visual effects and how they use practical makeup and add in CGI and blend it together. There were some examples on video, including Sam Huntington transforming into a werewolf and Donna on fire. After asking, I found out that the software they use on the show is Soft Image.

We were then given an exclusive look at the first eight minutes of the premiere. 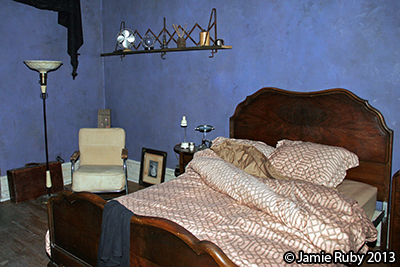 In season four, Sally is in a very different place - the show opens with her in a spa with Donna (Amy Aquino), but you soon find out that it is only a construct of Sally's mind as she can't accept what she has been told, apparently over and over. Donna says that she can't accept where she really is, Sally looks down and her arm is covered in blood.

Things are much different at home as well. Because of Liam, Josh turned into a werewolf and never turned back. Each day Aidan "exercises him" by letting him chase him through the woods, but Josh is getting faster, and they aren't sure if he even recognizes them anymore. 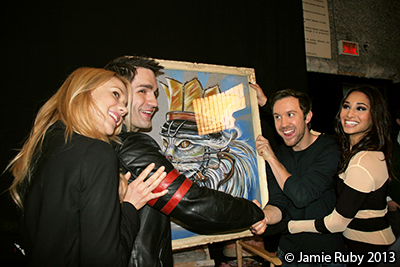 After the Q&A the cast stayed for a few minutes, but then were rushed out. They did however hold up a painting of Dog, The Cat-Man Dude that they were going to be using on the series coming up.

Then, there was no time for a break, we were off to see the set of Syfy's new series Helix.