Isolated. Alone yet claustrophobic in a facility with no way to escape. Hunted by a man who doesn't seem quite human anymore. Who can you trust; people turning on their friends and neighbors.

All of these are feelings the characters in Helix must inexplicably feel from the terror that is among them, being confined to the research facility that will be their new home for their indeterminable future.

In October, the digital press was given special access to the set of Helix, and SciFi Vision took part. 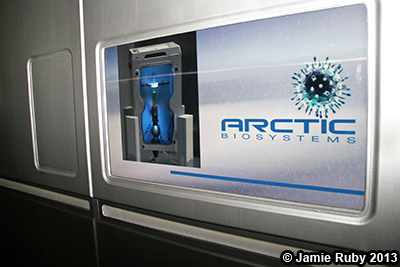 We were given a guided set tour by Creator and Co-Executive Producer Cameron Porsandeh (who I previously talked to at Fan Expo Canada in Toronto, more soon), and Director/Executive Producer Brad Turner. There were actually three different locations that made up the set.

We started into the facility and saw windows with fake snow along the corridors, as well as interesting 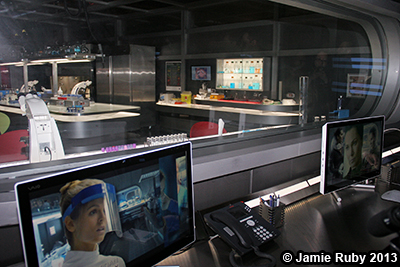 signs and panels, even a shower. We learned a few things as we went, such as that there aren't really a lot of corridors – there is one straight and one curved, then they just change the doorways so the place looks a lot bigger than it actually is. Turner also told us to watch out from up above in the lights. At the time we didn't know what to expect. We also came across doors that were "locked" with hand scanners. Other bits included gas valve switches on the wall, which you will see in the first episode. 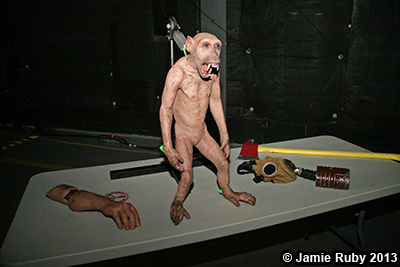 Other places we visited during the tour were some labs, one which had a woman on a hospital bed being looked over by a man in a decontamination suit looking at a hologram. Others contained various lab equipment.

We also saw the elevator, some blueprints, and the decontamination room that they walk through to be sprayed with steam, the room where they keep the suits and equipment, as well as a box with gloves people can use to work with viruses without touching them.

We also went into one of the living quarters, which I now believe was most likely Peter's. 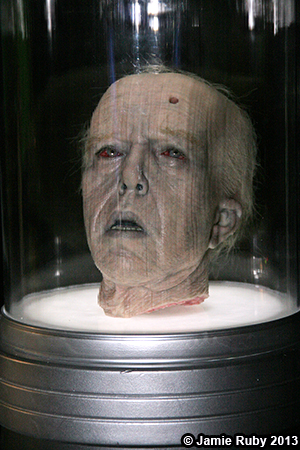 There was also an area with a venting system that they could shoot video through the ductwork with.

We also were taken through Hatake's office, which he also uses partially as a lab. The entrance is sort of a Zen garden; his windows look out to snow and green screen. Besides his desk, books, and lab equipment, there are also plants that he must use in research or experiments.

Syfy also had a couple tables with some props on display. One included some kind of frozen test tube sample, a small satellite dish, a door hand scanner, C-4 explosives, and a suitcase full of test tubes and such.

The other table included a prosthetic severed arm, along with the stump of the arm it was attached to, a monkey, and a gas mask. The monkey had a strange rubbery feel to it, as did the arm, which was actually weighted to make it realistic and actually had arm hairs embedded into it. 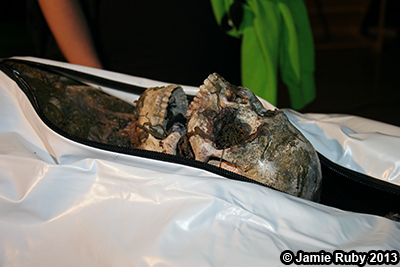 There was also a severed head floating in a tank as well as a decimated body in a body bag on a stretcher.

Next we moved onto the third part of the set tour, which is embargoed for now, and eventually the Q&A. Stay tuned to SciFi Vision for more soon.