SciFi Vision | All Reviews | Television Reviews | Fringe 4.16 Review: "Nothing As It Seems"

Much of this season has felt like a return to some of the concepts of the first season, now armed with the improvements and layers that were added in the interim, and this episode is a perfect example of that. It’s also another great example of how the changes between original and overlaid timelines have led to different results.
Certainly, the survival of David Robert Jones has changed quite a bit in terms of how matters have progressed. What was a fairly simple mystery in an early first season episode becomes a much more interesting exploration of what Mr. Jones’ ZFT organization might have been. That the characters never actually bring up ZFT is more the puzzle, though admittedly, Jones seems more focused on the forced evolution of the human species than ZFT ever was.

Revisiting the “porcupine man” might have been a tedious retread, had it not been for the exploration of the consequences of Olivia’s choice in the previous episode. Olivia has decided to give in to the memory-replacement process that was already erasing her memories from the overlaid timeline, and the net effect is that she is forgetting a number of key pieces of information. Well, at least from the point of view of those still 100% invested in the overlaid timeline. 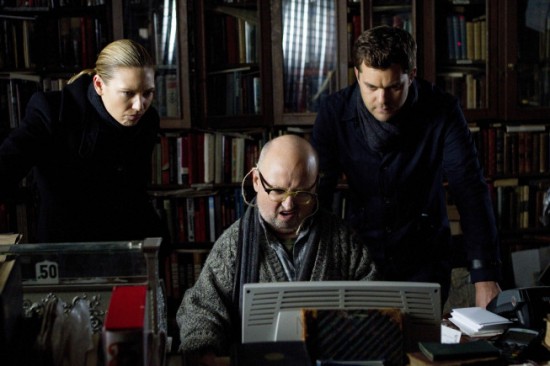 Unfortunately, that’s the world that she and Peter are living in, and as such, the incompatibility is a very real and pressing issue. One might be tempted to presume that Peter is dealing with the same thing, and the difference in how the characters are treated is unfair and even sexist. But it’s really apples and oranges; Peter never existed in the overlaid timeline, so he is operating from one completely consistent set of outside experiences. Olivia, on the other hand, is living with two sets of incomplete memories, and it’s impossible to know where the boundaries might be. She is, in a very real sense, compromised. After all, she’s supposed to have an eidetic memory, so this is a huge change for her.

The resolution to the problem, as presented in this episode, feels a bit rushed, even if one can agree that a psychologically hobbled Olivia is still more useful than a completely green agent, when it comes to Fringe Division. And as yet another facet of the running theme of human consciousness, Olivia’s condition has to be center stage. (Though I still think it would be great if she was forced to see a therapist, and it was one of the characters from “Awake”!)

The scenes with Markham were a nice way to touch back on those first season concepts, when it wasn’t entirely clear what the show was going to be about, and strange sources of information were a treat. For Peter and Olivia, Markham was an old friend, so there was a playful side to their banter. It helped to gloss over the notion that there would be this ancient Sumerian cult working with Mr. Jones on a decidedly modern incarnation of its central principle. (Though one could see how Mr. Jones would use cultish trappings to draw in test subjects.)

All the while, Lincoln Lee is forced to deal with a new career as wall-integrity test dummy, which also leads to being infected with the “porcupine man” virus. There’s never a sense that Lincoln is in any real danger, but his reactions to Walter’s constant chatter are priceless. However, his long-term survival seems suspect, given that the Peter/Olivia pairing is stronger than ever. (Then again, Olivia still has to die, doesn’t she? Or was that a metaphor for the “death” of the overlaid timeline’s version of Olivia?)

Far from treading water, this season of “Fringe” has challenged its viewers while remaining true to its vast and complicated tapestry. The premise of the season was perfectly designed to allow early elements of the series to be explored within the wider context. If there is any downside to all of this, it’s the realization that the series may be cut down before it can bring the whole shebang to its intended conclusion.