SciFi Vision | All Reviews | Television Reviews | The Vampire Diaries 3.18 Review: "The Murder of One"

The Vampire Diaries 3.18 Review: "The Murder of One"

My initial reaction to this episode was frustration. There’s nothing worse than following a season-long plot arc, only to realize that most of it was a diversion, with the story circling back on itself when the final episodes arrive and it’s time to get serious about setting up a resolution. While I’ve been able to forgive some of the backtracking and red herrings this season, this latest reversal in the Team Elena vs. Originals saga is maddening.
It doesn’t help that most of this time was spent to allow characters on one side to forge bonds with the other, as if to maximize the drama when the big finale finally comes to pass. Despite Klaus’ previous arch-villainy, there was even reason to believe that they were developing sympathetic qualities, given his emerging relationship with Caroline. But here we are, with Klaus going back to the plan of creating a hybrid army with Elena’s blood, despite that having been more or less addressed in the first half of the season.

Events in this episode also rendered the entire plot point of linking the Originals utterly moot. What was the point of linking them all together, other than to send Team Elena on a wood-based fetch quest that, in the end, amounted to nothing? Add to that the inexplicable decision to bring in Sage, set her up as an important addition to the mix, to the point of emphasizing her presence in the previous episode, only to kill her off now? It just adds to the feeling that this season arc hasn’t actually been building to anything. 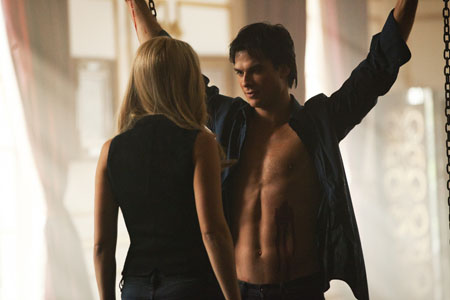 Speaking of Team Elena, it was a lot more interesting when there was the potential for Elena to come to the conclusion that neither Salvatore was the right person in her life. She’s given several rational, self-actualizing reasons why neither Stefan nor Damon is going to work for her future. While I accept the notion that the heart doesn’t often listen to the brain, I practically want to take Elena by the shoulders and shake some sense into her.

I also must agree with those who consider Bonnie to be compromised beyond all recovery at this point. All it takes is a series of vague threats from Klaus for her to conduct a spell that essentially restores him as a major threat. Klaus is now fully aware that he can apply the same pressure to get Bonnie to do anything he wants. Bonnie’s been in character limbo most of the season, but this is getting ridiculous.

There was one interesting advancement, of course: the knowledge that killing an Original leads to the death of that Original’s entire bloodline. Assuming that this is not merely an effect on direct “progeny”, it’s a fairly big deal. The whole point of calling them Originals is that the rest of the vampire population descended from them. So it would seem that killing Klaus, or any of the remaining Originals, would be a fairly bad idea.

But that only feeds back into the notion that the season arc was building to a state of détente between the two sides: a realization that the only reasonable path forward was an uneasy mutual existence. In the end, that’s what it might still come down to, if Klaus can only be persuaded to stop with the megalomaniacal plans. Unfortunately, this episode completely undermines that potential resolution, so I fear we’re left with a climax that will be less than satisfying.